Whether it’s the destruction of rainforest shared by elephants and orangutans in Sumatra to produce palm oil; reports linking fast food giants to the burning of tropical forests in Brazil and Bolivia; or the hundreds of thousands of hectares of tree cover loss per year in West Africa – the world’s forests are being razed to sate global demand for produce such as palm oil, beef and cocoa.

As of March 2017, 447 companies had made 760 commitments to curb forest destruction in supply chains linked to palm oil, soy, timber and pulp, and cattle – principal forest-risk commodities – according to NGO Forest Trends. But what does this mean? And why do deforestation scandals keep emerging?

Why does deforestation matter?

According to Nasa’s Earth Observatory [pdf], if current rates of tropical deforestation continue, the world’s rainforests will vanish within 100 years, eliminating the majority of plant and animal species on the planet, as well as uprooting the communities who live there.

Around 70% of deforestation is linked to the production of agricultural commodities that end up in food products eaten around the world. And deforestation accounts for around 12% of global manmade greenhouse gas emissions. A recent study from Cornell University suggests deforestation contributes more significantly to climate change than previously realised.

What are ‘zero deforestation’ commitments?

The UN’s sustainable development goals pledge to halt deforestation by 2020. A growing number of companies from McDonald’s to Unilever are also voluntarily committing to eliminate deforestation from their supply chains, both in their individual sustainability policies and through participation in larger initiatives. 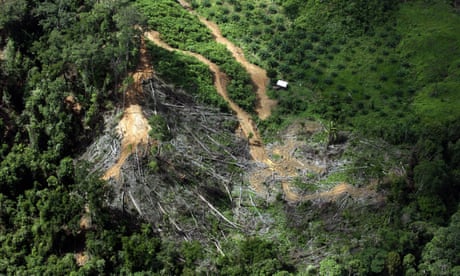 These include the Consumer Goods Forum – a network of consumer goods manufacturers, retailers and others – which has a commitment to achieve zero net deforestation by 2020. And the New York Declaration on Forests [pdf], which emerged from the UN’s climate summit in 2014, and includes non-binding commitments to half the rate of deforestation by 2020 and end it by 2030.

One issue complicating these pledges is a lack of agreement about what a forest even is. The United Nations Environment Programme (UNEP) and the Food and Agriculture Organisation (FAO) offer guidance, but each country is free to define forests within these criteria.

Who is slipping through the net?

Anti-deforestation pledges are a positive step, but they have limitations, says Pablo Pacheco, principal scientist at the Centre for International Forestry Research. In the Indonesian palm oil sector corporate groups often do a good job of tracing supply from refineries to mills to plantations, says Pacheco, but face difficulties in tracing smaller, third party suppliers since they are often linked to the market through intermediaries.

There is also the issue of some countries, for example China and India, being less engaged in the deforestation debate. China and Hong Kong together are among the largest importers of forest risk commodities globally, yet in 2016 they only scored two out of five on The Forest 500’s annual ranking of jurisdictions based on deforestation policies.

A recent Oxfam report [pdf] on deforestation-free food concluded that despite company commitments, not enough is being done to translate these into policies and action.

The report also calls on companies to go beyond their own forest commitments to protect land rights and those who defend them. In Peru, six farmers were recently shot dead in a battle over land rights and palm oil and, in total, more than 145 land defenders have been killed so far this year – many linked to deforestation.

There’s also a concern from some campaigners about a focus on company pledges. Sam Lawson, founding director of the NGO Earthsight, says voluntary commitments will only ever capture a certain proportion of the market – with “bad apples showing little regard for legality, let alone sustainability”.

Attention on company commitments could also interfere with the time and funding dedicated to forest policy. “The effort spent pushing for corporate voluntary actions … is distracting attention from some of the critical things, like getting the Indonesian government to cancel the corruptly issued licenses that cover vast areas of forest in that country,” he says.

The increased availability of technology is also helping companies to monitor and manage deforestation. The Global Forest Watch, for example, has developed a monitoring tool which gives near real time alerts on areas of suspected forest clearance.

And there is growing hope for cross-sector partnerships, bolstered by the success of Brazil’s soy moratorium. The initiative between government, environmentalists and companies started in 2006 when soy buyers agreed not to purchase soy from deforested areas in the Amazon. The moratorium was extended indefinitely last year and, while it is not without critics, a recent study concludes the deforestation rate pre-moratorium was more than five times that post-moratorium.