China is reportedly considering plans to build a 1,000km (620 mile) pipeline to pump water all the way from Siberia to its drought-stricken northwest.

According to reports in the Chinese media, urban planners in Lanzhou, the capital of Gansu province, have drawn up proposals to pipe water into the chronically parched region from Russia’s Lake Baikal, the deepest freshwater lake on earth.

Li Luoli, an academic who is one of the plan’s cheerleaders, claimed the mega-project – roughly the equivalent of pumping water from Lake Como to London – was both theoretically feasible and “certainly beneficial” to China.

“Once the technical issues are resolved, diplomats should sit down and talk to each other about how each party would benefit from such international cooperation,” said Li, the vice president of the China Society of Economic Reform, a state-run think tank.

In a report this week the state-run Global Times said the pipeline would quench the “desperate thirst” of a province that saw just 380mm of rain last year.

It would begin at the southwestern tip of the 600km-long Russian lake and run about 1,000km, across Mongolia, to Gansu’s capital through the Hexi corridor, a desert region near the westernmost tip of the Great Wall of China.

The project would boost both Gansu’s “ecological environment” and its economy which the newspaper said had been severely hampered by the lack of water.

The drastic plan underscores the severity of the water crisis facing Beijing.

China has 20% of the world’s population but just 7% of its fresh water with the north, in particular, facing a calamitous shortage thanks to urbanisation, over-use, wastage and pollution.

In 2005 China’s former minister of water resources, Wang Shucheng, warned that by 2020 many northern cities, including the capital, might run out of water.

Plans to pipe in Siberian water, which are likely to alarm conservationists, are not the first of their kind.

Last year Russia’s agriculture minister, Alexander Tkachev, suggested pumping water across Kazakhstan to Xinjiang, another dry northwestern region, but only “under the condition of full compliance with the interests of Russia, including environmental”. 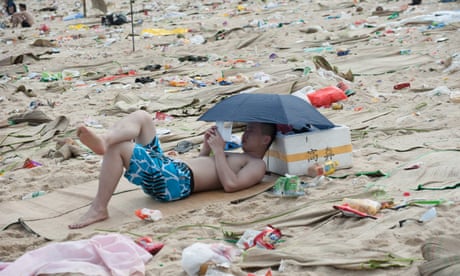 “Water is the same resource as oil, gas, gold, and sooner or later we will start to sell it,” Stepan Svartsev, an academic from Tomsk state university was quoted as saying: “Our country has very large reserves and certain volumes could be sold.”

Nor would the pipeline represent China’s first foray into the world of mega-hydro-projects.

In 2014 it inaugurated one of the biggest engineering feats in history, the £48bn South-North Water Diversion, a huge web of canals and reservoirs built to shift trillions of gallons of water each year from southern China to its water-deprived north.

The project, first conceived by Mao but only approved in 2002, was plagued by criticism of its massive price-tag and impact on nature and people, hundreds of thousands of whom were forced from their homes as a result.

Perhaps the greater hurdle facing the Siberia-Gansu pipeline is convincing Russia to part with its water. Wang Hao, head of the China institute of water resources and hydro-power research, told the Global Times it would hinge on “political and diplomatic issues”.

“The government should attach great importance to water resources of which there is a severe scarcity … and for which there are no alternatives.”