A company displays lumber in Vietnam, whose wood products industry is grappling with risks ranging from the Ukraine war to fake forest certificates and U.S. trade probes. (Photo by Lien Hoang)

HO CHI MINH CITY — Reputational risks are piling up for a Vietnamese lumber industry already beset by a falloff in demand from the heights of the pandemic.

One of the world’s biggest wood and furniture exporters, Vietnam enjoyed a surge in orders when overseas buyers spent COVID lockdowns renovating their home offices and kitchens.

But the Southeast Asian country faces accusations of importing Chinese goods for re-export with “Made in Vietnam” labels since the onset of the China-U.S. tariff war in 2018. Now an actual war in Ukraine is stoking concern that sanctioned products from Russia may be routed through Vietnam, which maintains a neutral stance on the conflict between Kyiv and Moscow, as it does with Beijing and Washington. A third concern, about logging of fuel wood, has added to the pressure.

The U.S. branch of the nonprofit Environmental Investigation Agency (EIA) says Western sanctions over the war have led to Russian timber being shipped through third countries to disguise its origin.

The EIA interviewed middlemen in China and analyzed U.S. purchases of plywood and furniture, concluding, “The majority of the birch in these products came from Russia, and traveled across China and Vietnam before entering the U.S.”

Transshipment is illegal if cargoes are routed through a third country for no business purpose other than to evade taxes or sanctions.

A Vietnamese broker who connects companies in the wood products and other international industries told Nikkei Asia that transshipment is common, saying, “It’s normal. With Vietnam’s location, it’s easy to transship goods.”

The communist country shares a border with China and has 3,200 kilometers of coastline along major trade routes. 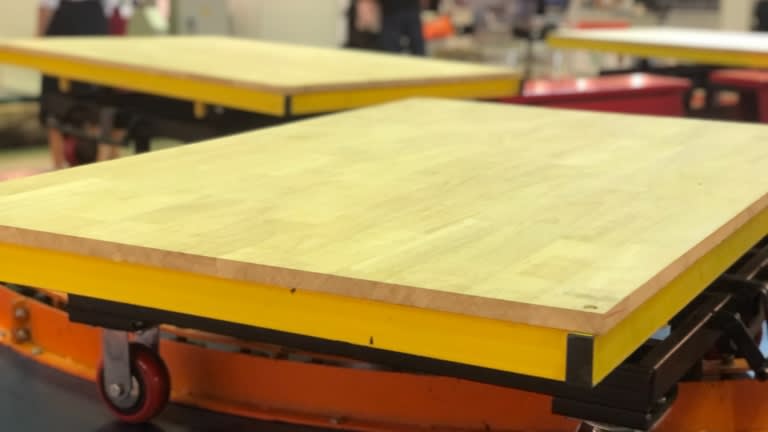 A wood products expo in Vietnam. Its monthly birch plywood exports to the U.S. shot up 200% while those from Russia plunged 40% after it was sanctioned for invading Ukraine, the Environmental Investigation Agency said. (Photo by Lien Hoang)

The U.S. Commerce Department has launched several probes into Vietnamese wood exporters over alleged illegal transshipments. A decision on one of those cases is due this month. Penalties typically include fines or import bans.

The global conservation group verifies that supply chains are free of deforestation and other violations. It expelled An Viet Phat Energy, which exports wood pellets for fuel, for three and a half years. The FSC said on Oct. 18 that it had received complaints that the Vietnamese company had sold “a large volume” of pellets with false certificates.

The company did not reply to Nikkei Asia’s requests for comment. The FSC said it will announce more results of its investigation, which also covers other Asian companies, by year’s end.

Analysts predict this will hurt importers in Japan that buy only certified wood and, like buyers in South Korea, source from Vietnam and Thailand. Other green groups have pressed the FSC to ensure supply-chain transparency amid concerns that businesses use its logo despite profiting from illegally cut trees in places like Indonesia, Cambodia, Laos and China.

In March, the council said goods from Russia and Belarus would not be able to trade with FSC labels “until the invasion ends.”

These reputational risks are further squeezing Vietnam’s wood and wood products industries at a time when they are grappling with a sharp drop in demand as the world emerges from the pandemic.

“With people locked in their houses [due to COVID restrictions], two to three years’ worth of home renovations [were] done in a year,” American Hardwood Export Council Director Michael Snow told Nikkei Asia, noting that Vietnam is the trade group’s top buyer, after China and Canada, with most of the wood used for re-export.

This year, however, Vietnam’s wood products exports sank 21% from August to September, more than the 14.6% drop in total shipments, its customs data shows. Furniture exports in 2020 were worth $7.3 billion, behind only China and Germany, says the Observatory of Economic Complexity.

Still, some in Vietnam see a silver lining amid the turmoil of the war and sanctions.

Nguyen Van Dong, director of FSC-certified lumber producer Hoa Linh, said his company’s orders are down 50% this year versus 2021 as inflation hits demand and drives up material costs, while some supply chains remain logjammed.

While the immediate outlook may be bleak, Dong is hopeful his company can help fill the supply gap left by sanctions on Russia.

“Vietnam’s furniture industry is very big,” Dong said in an interview. “Why not use local sources?”