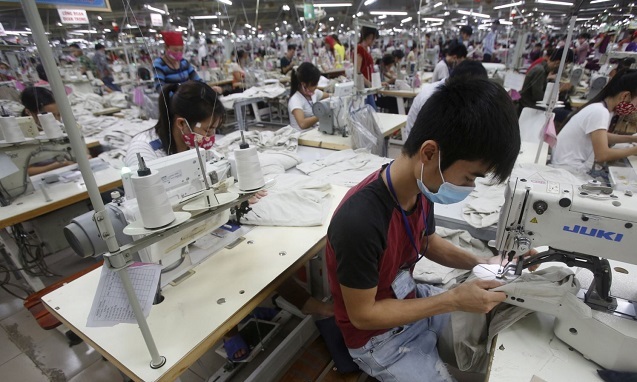 Laborers work at a garment factory in Bac Giang province, near Hanoi, Vietnam. Photo by ReutersProductivity is rising, but not as fast as wages, creating the risk of an economic imbalance.

Vietnam’s labor productivity last year was among the lowest in Asia despite showing growth, according to a report published on Tuesday.

However, the level is still below Japan, South Korea, China, Singapore, Thailand, Malaysia, the Philippines, Indonesia and Cambodia, according to researchers from the Vietnam Institute for Economic and Policy.

The General Statistics Office says that Vietnam’s labor productivity is only 1/18th of Singapore, 1/16th of Malaysia and 1/3 of Thailand and China.

Vietnam’s labor productivity was lower than Cambodia’s in the manufacturing, construction and transportation-storage-communications sectors. The country’s productivity ranked second lowest of the countries reviewed, and was only higher than Cambodia in agriculture, electricity-water-gas and wholesale-retail-repair, the report said.

In order for Vietnam to surpass neighboring countries such as Cambodia in terms of productivity and economic growth, the country needs stronger reforms, researchers said.

The link between labor productivity and wage growth was also mentioned in the report. Vietnam’s current minimum wage is set from VND2.76 to 3.98 million ($121-175) per month, depending on each region.

Vietnam’s wage growth of 6.7 percent exceeded labor productivity growth of 5 percent between 2004 and 2015, and researchers are concerned it could create an imbalance if the pattern persists.

The study also outlined issues with the country’s young workforce, as 60 percent of young laborers with lower and upper secondary education are working in the informal sector (for example, a family business), which are generally considered areas of low productivity, precarious employment and unstable incomes.

Nearly a half of young workers have a qualification mismatch, and 33 percent are not qualified for what they do, the report said. Around 70 percent of young workers do not have social insurance, but wages continue to  increase rapidly, it added.

Vietnam is currently riding on a wave of high growth, and some researchers forecast that GDP growth will reach 6.83 percent this year, exceeding the National Assembly’s target of 6.7 percent. However, there is the possible risk of inflation exceeding 4 percent due to pressure from price adjustments for public services and petroleum, they added.