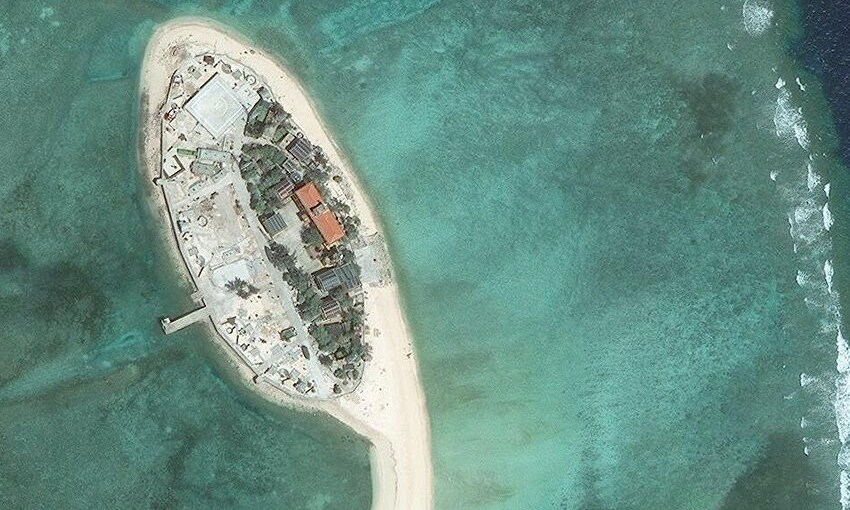 The Grierson Reef of the Spratly Islands. Photo by the Center for Strategic and International Studies (CSIS).Chinese vessels operating near the Spratly Islands is a serious violation of Vietnam’s sovereignty and must be ended, Vietnam has demanded.

“This goes against the spirit of the Declaration on the Conduct of Parties in the South China Sea (DOC) and complicates the situation in the sea. Vietnam demands that China ends its violations, respects Vietnam’s sovereignty, comply with the DOC and not complicate the situation further,” Hang said.

“It should be repeated that Vietnam has full legal basis and historical evidence to assert sovereignty over the Spratly Islands, in accordance with international law. As a coastal state and a member of the UNCLOS, Vietnam enjoys sovereignty, sovereign rights and jurisdiction in accordance with the convention,” she said at a press meet, answering questions about the situation of many Chinese ships anchored in the reef in the South China Sea, which Vietnam calls the East Sea.

The Grierson Reef belongs to Spratly Islands and is part of Sinh Ton Commune, Truong Sa District in the south-central province of Khanh Hoa.

Hang said Vietnam’s maritime law enforcement forces are fulfilling their obligations under Vietnamese and international laws, such as UNCLOS, in coping with the issue.

The Philippines Coast Guard announced earlier that some 220 vessels, believed to be manned by Chinese maritime militia personnel, were seen operating near a reef in the South China Sea on March 7. The vessels kept the light on overnight, but have not engaged in any fishing activities despite the convenient weather.

Philippine military chief Lieutenant General Cirilito Sobejana confirmed Monday that the ships are still in the area and the Philippines is making an accounting of the exact number of vessels.

The U.S. Embassy has said it shared the concerns of the Philippines and accused China of using “maritime militia to intimidate, provoke, and threaten other nations, which undermines peace and security in the region.”

An international tribunal in 2016 invalidated China’s claim to 90 percent of the South China Sea, but Beijing does not recognize the ruling. China has in recent years built islands in the waters, putting air strips on some of them.Related News: