IEEFA: Lessons from the Texas energy crisis for emerging LNG importers in Asia

During last week’s extreme winter weather, surging electricity demand collided with falling generation, forcing the state’s grid operator to implement rolling blackouts. In many cases, blackouts lasted for over 24 hours, causing fuel and electricity supply shortages and disruptions throughout the gas supply chain. At least 4.5 million Texans were at one point without electricity and more than 30 deaths have been attributed to power losses, though the final toll could be much larger.

News of the Texas power crisis has spread throughout Asia, where energy growth markets such as Vietnam, the Philippines, and Bangladesh are considering U.S. liquified natural gas (LNG) imports as an alternative to coal-fired electricity generation. But the events in Texas have highlighted the risks inherent in LNG imports for both the energy transition and climate change adaptation.

Below are five lessons from the crisis for emerging markets in Asia.

It has been a tumultuous year in global LNG markets. The COVID-19 outbreak sent global LNG demand plummeting and Asian prices hit an all-time low of $1.85/MMBtu last May. U.S. LNG export facilities remained idle for much of the summer, oil and gas drilling fell by 40% internationally, and bankruptcies in the North American oil and gas sector soared to their highest level since 2016. Starting in the fall, a combination of production shut-ins, shipping delays, and cold weather caused Asian LNG prices to spike to a record high of $32.50/MMBtu.

Volatility in global gas markets is likely to continue

Lesson 2. Volatile prices can cause LNG-fired power plants in Asia and associated infrastructure to go under-utilised.

Volatile LNG prices create an increasingly challenging environment for price-sensitive emerging markets. High prices and difficulties sourcing gas can cause gas-fired power plants in importing countries to go underutilized. In turn, all the associated infrastructure – ports, regasification facilities, pipelines – are also at risk of being stranded. IEEFA recently estimated that volatile LNG prices put over $50 billion of natural gas projects at risk of cancellation in Vietnam, Bangladesh, and Pakistan.

Since the value of associated infrastructure is dominated by fixed costs, per unit natural gas prices depend largely on total gas demand. This means that to realize any economic benefits from imported gas, costs must be spread over a wider consumer base than currently exists in many south and southeast Asian countries. The decision to import LNG is therefore not an incremental one. Rather, it will lead to new sources of financial vulnerability resulting from long-term, large-scale fossil gas lock-in. Without major storage capacity, volatile LNG prices will be a constant threat to the affordability of gas and gas-powered electricity in import markets.

By importing greater volumes of LNG, Asian countries become more vulnerable to supply disruptions in global gas markets and geopolitical dynamics beyond their control. With increasingly severe and frequent weather events caused by climate change, Asian importers are not just assuming the risks of climate-related disruptions in their own country, they are also assuming risks of climate-related weather events in exporting countries. In Texas, generators were not required to invest in cold weather safeguards, leaving them vulnerable to unpredictable weather events.

LNG import infrastructure in Asia is also highly vulnerable to extreme weather. While numerous countries rely on floating storage and regasification units (FSRUs) as cheaper alternatives to land-based import terminals, FSRUs are difficult to operate in poor weather conditions. In 2018, Bangladesh announced it would cancel plans to build additional FSRUs because they were unreliable during the monsoon season. In Malta, the inoperability of FSRUs during storms has caused the complete shut-down of the country’s gas-fired power plants.

Some commentators have suggested the solution to climate-related blackouts is to build more generation capacity, but all power sources are susceptible to outages when weather events occur. In Texas, 30,000MW of thermal capacity was forced offline – including 40% of natural gas capacity and a nuclear reactor – as well as 17,000MW of wind capacity. As a result, wholesale electricity prices skyrocketed to the state’s $9,000 per MWh cap, up from their average of $30.

Along with generation capacity, grid reliability depends largely on transmission infrastructure and interconnections to other areas. The Texas grid is highly isolated from surrounding power systems, limiting power imports from nearby markets. In small portions of the state connected to other grids, cities experienced brief blackouts compared to the rest of the state.

A greater emphasis on system-level planning in emerging Asian markets, rather than a myopic focus on generation, could improve the efficiency of existing generators, enable the installation of greater capacities of domestic renewable energy, and lower wholesale electricity prices during times of short supply.

Lesson 5. The energy transition is a humanitarian issue.

The COVID-19 pandemic and the Texas energy crisis have exacerbated the risks inherent in LNG imports and revealed the flaws of centralized generation capacity buildouts. In Texas, blackouts disproportionately affected low-income communities, while electricity bills for some households that maintained power spiked into the tens of thousands of dollars. The total cost of electricity sold in Texas from February 15-19 was $50.6 billion, up from $4.2 billion in the prior week. For Asian countries already grappling with high electricity prices, the risks of LNG imports and associated infrastructure lock-in are simply too high. Instead, reliability and resilience are key to keeping costs down and the lights on.

As a lethal pandemic, economic and physical insecurity, and violent conflict ravaged the world, democracy’s defenders sustained heavy new losses in their struggle against authoritarian foes, shifting the international balance in favor of tyranny.

As a lethal pandemic, economic and physical insecurity, and violent conflict ravaged the world in 2020, democracy’s defenders sustained heavy new losses in their struggle against authoritarian foes, shifting the international balance in favor of tyranny. Incumbent leaders increasingly used force to crush opponents and settle scores, sometimes in the name of public health, while beleaguered activists—lacking effective international support—faced heavy jail sentences, torture, or murder in many settings.

The winter storms that swept across the U.S., particularly Texas, upending the energy market and knocking out power for millions of people, have delivered a windfall for Macquarie Group, with the Australian bank lifting its profit outlook for 2021 by as much as 10 percent, just two weeks after warning that earnings would be “slightly down”.

“Extreme winter weather conditions in North America have significantly increased short-term client demand for Macquarie’s capabilities in maintaining critical physical supply across the commodity complex,” according to the company, which is the second-largest supplier of gas in North America after oil major BP, as quoted by Reuters. 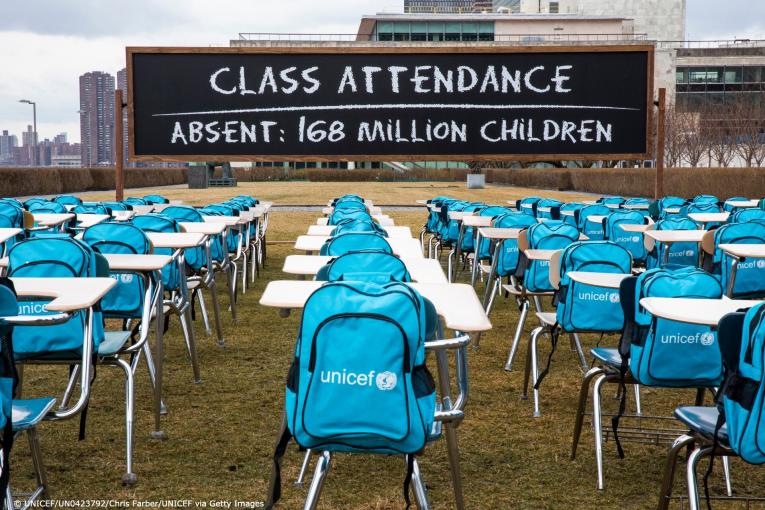 Chris Farber/UNICEF via Getty ImagesOn 1 March 2021, a view of UNICEF’s ‘Pandemic Classroom’ installation at United Nations Headquarters in New York, United States of America. To call attention to the education emergency wrought by the COVID-19 pandemic, and to and raise awareness of the need for governments to keep schools open, UNICEF unveiled ‘Pandemic Classroom’ – a model classroom made up of 168 empty desks, each seat representing one million children living in countries where schools have been almost entirely closed since the onset of lockdowns.

END_OF_DOCUMENT_TOKEN_TO_BE_REPLACED

Officials in the country’s defense and foreign ministries told Reuters that the frigate, scheduled to embark on a trip to Asia in August, will traverse the South China Sea on the return leg of its journey.