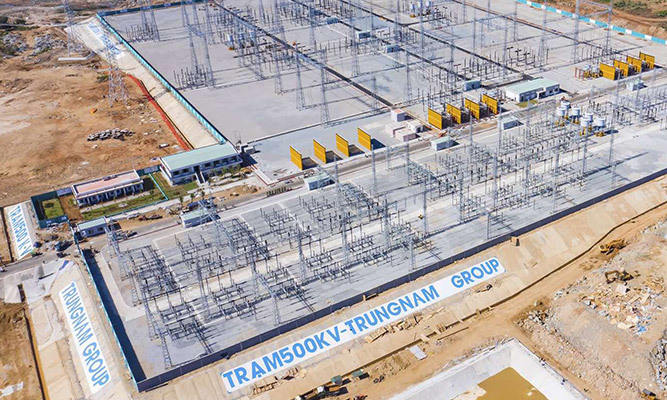 An aerial view of the 500kV substation of the Trung Nam Thuan Nam Solar Power Plant in the central province of Ninh Thuan. Photo courtesy of Trungnam Group.

The largest solar farm in Southeast Asia has been commissioned in Vietnam’s central province of Ninh Thuan.

The 450 megawatt Trung Nam Thuan Nam Solar Power Plant, which spreads over an area of nearly 560 hectares in Thuan Nam District, went on stream on Monday evening, 102 days after construction began in mid-May.

Built by Ho Chi Minh City-based energy firm Trungnam Group at a cost of VND12 trillion ($518 million), it has a plant that can produce over one billion kilowatt-hours of electricity a year and a 17-kilometer transmission line to connect it with the grid.

This is the first time a private company has been allowed to install a transmission line, a preserve thus far of state-owned utility Vietnam Electricity (EVN).

Laying transmission lines has become a critical task since the rising number of renewable energy plants is overloading existing ones.

Trungnam has added a total of 1,064 megawatts capacity to the national grid comprising of hydropower and solar and wind power. It plans to have a renewable output of nearly 10,000 MW by 2027.

There are over 100 solar power plants operating in the country with a total capacity of over 6,300 MWp.

The Ministry of Industry and Trade is drafting a national power development plan for the next decade with a 80 GW addition to generation capacity of which 37.5 percent will come from wind and solar power.

Vietnam needs over $133 billion over the next decade for building new power plants and expanding the grid to fully meet its surging demand for electricity.Related News: