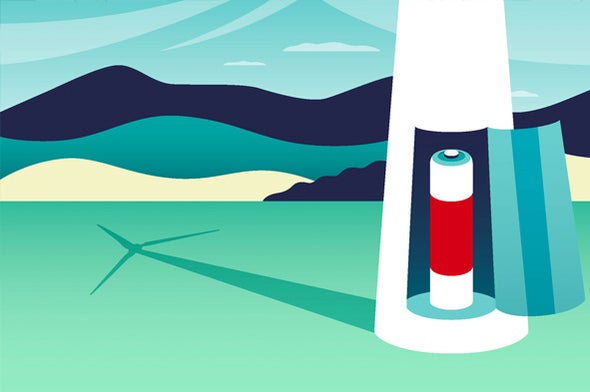 The way the world gets its electricity is undergoing a rapid transition, driven by both the increased urgency of decarbonizing energy systems and the plummeting costs of wind and solar technology. In the past decade electricity generated by renewables in the U.S. has doubled, primarily from wind and solar

installations, according to the Energy Information Administration. In January 2019 the EIA forecast that wind, solar and other nonhydroelectric renewables would be the fastest-growing slice of the electricity portfolio for the next two years. But the intermittent nature of those sources means that electric utilities need a way to keep energy in their back pocket for when the sun is not shining and the winds are calm. That need is increasing interest in energy-storage technology—in particular, lithium-ion batteries, which are finally poised to be more than just a bit player in the grid.

For decades pumped-storage hydropower, a simple process that features reservoirs at different elevations, has been the dominant large-scale energy-storage method in the U.S. To store energy, water is pumped into the higher reservoir; when that energy is needed, the water is released into the lower reservoir, flowing through a turbine along the way. Pumped-storage hydropower currently accounts for 95 percent of U.S. utility-scale energy storage, according to the Department of Energy. But as efficiency and reliability have improved, and manufacturing costs have tumbled, lithium-ion batteries have surged. They account for more than 80 percent of the U.S.’s utility-scale battery-storage power capacity, which jumped from just a few megawatts a decade ago to 866 megawatts by February 2019, the EIA says. A March 2019 analysis by Bloomberg New Energy Finance reports that the cost of electricity from such batteries has dropped by 76 percent since 2012, making them close to competitive with the plants, typically powered by natural gas, that are switched on during times of high electricity demand. To date, whereas batteries have largely been used to make brief, quick adjustments to maintain power levels, utilities in several states, including Florida and California, are adding lithium-ion batteries that will be able to last for two to four hours. Energy research firm Wood Mackenzie estimates that the market for energy storage will double from 2018 to 2019 and triple from 2019 to 2020.

Lithium-ion batteries will likely be the dominant technology for the next five to 10 years, according to experts, and continuing improvements will result in batteries that can store four to eight hours of energy—long enough, for example, to shift solar-generated power to the evening peak in demand.

But getting to the point where renewables and energy storage can handle the baseline load of electricity generation will take energy storage at longer timescales, which will mean moving beyond lithium-ion batteries. Potential candidates range from other high-tech options, such as flow batteries, which pump liquid electrolytes, and hydrogen fuel cells to simpler concepts, such as pumped-storage hydropower and what is called gravity storage. Pumped-storage hydropower is cheap once it is installed, but it is expensive to build and can be used only in certain terrain. Similarly simple is the concept of gravity storage, which purports to use spare electricity to raise a heavy block that can later be lowered to drive a turbine to generate electricity. Although a few companies are working on demonstrations and have attracted investments, the idea has yet to take off. Other options are still under development to make them sufficiently reliable, efficient and cost-competitive with lithium-ion batteries. There were only three large-scale flow-battery storage systems deployed in the U.S. by the end of 2017, according to the EIA, and utility-scale hydrogen systems remain in demonstration stages. The U.S. government is funding some work in this arena, particularly through the Advanced Research Projects Agency–Energy (ARPA-E), but much of the investment in those technologies—and in energy storage in general—is happening in China and South Korea, which have also ramped up storage research.

Read more from this special report:

The Top 10 Emerging Technologies of 2019

It is uncertain whether and how much the costs of energy storage will continue to decline. Yet the accumulating pledges by governments—including at the state and local level in the U.S.—to achieve carbon-free electricity production will provide a continued push to bring more and more storage online.