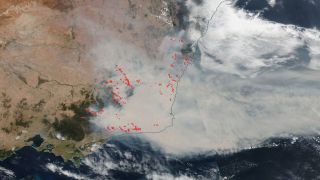 Wildfires devastated southeastern Australia in the final months of 2019 and in January 2020. See photos of those wildfires from space as NASA tracks them with satellites. (Image: © NASA EOSDIS)

Fueled by a lengthy and intensifying drought, an early kickoff to fire season in the Australian states of Queensland and New South Wales began in September 2019 and continued into early 2020. Upwards of 100 wildfires have devastated Australia’s southeast coast, killing at least 17 people.

This story was updated with new imagery on Jan. 6.

This animation is a model of where the black smoke from the raging Australian wildfires is traveling. It’s based off of the GEOS forward processing (GEOS FP) model, which combines information from satellite, aircraft and ground-based observation systems and uses data such as air temperature, moisture levels and wind information to project the plume’s behavior.

NASA’s Aqua satellite used its Moderate Resolution Imaging Spectroradiometer to capture this view of wildfires raging on Australia’s eastern coast on Dec. 9, 2019. The wildfires were fueled by unusually hot weather and a potent drought that primed the region in October 2019, according to the space agency.

This map depicts measurements of outgoing longwave radiation in November 2019. The data on Australia’s heat emission comes from the Clouds and the Earth’s Radiant Energy System on board NASA’s Terra satellite.

Taken on Nov. 5, 2019, this image shows fire and smoke over southern Western Australia. The image, taken by the Operational Land Imager, exhibits fire in the Goldfields region.

The Visible Infrared Imaging Radiometer Suite on the Suomi NPP satellite captured the recent outbreak of fires in New South Wales. Thick smoke is blowing over the Tasman Sea.

More than 100 bushfires burned on the east coast of Australia, stretching from the Blue Mountains to the border of Queensland, which has over 50 of its own blazes. The hot, dry and windy weather has precipitated an early and grisly start to this year’s fire season.

Due to the long-term drought in southern Western Australia, the Australian Bushfire and Natural Hazards CRC anticipated an eventful fire season for 2019-2020.

As of Nov. 12, 2019, around 150 wildfires burned in New South Wales and Queensland, spread by the extremely hot, dry and wind conditions in the country. Over the Tasman Sea plumes of smoke are visible. In Sydney and Brisbane the smokey haze is producing hazardous air quality, affecting residents.

Reports on Nov. 13, 2019 indicate close to 1.1 million hectares of land have burned since September 2019 with about 69 in New South Wales and 70 in Queensland still burning. The long drought has produced dry tinker-like conditions in the region.

The destructive 2019-2020 fire season in Australia, which got off to an early start in September, continued to blaze across the southern and eastern Australian states into the third week of November. Smoke from the fires has blown half-way around the world.

On Nov. 21, 2019, the Copernicus Sentinel-2 mission collected images of smoke from the Gospers Mountain bush fires drifting toward Sydney, contributing to the degrading air quality in the city.

Bushfires burn visibly in this satellite image captured by the Visible Infrared Imaging Radiometer Suite on Dec. 4, 2019, near the coast of New South Wales and north toward Queensland.

More than a tenth of the area where Australia’s national parks lie in New South Wale have been burned by the endless blazes with the Blue Mountains world heritage area having lost 20% of itself to flames.

The abnormal high temperatures and lack of rain prepared the New South Wales region for the devastating fire season. Even subtropical rainforests and eucalyptus forests, which do not often see fire, have burned.

The Terra satellite, which launched into orbit in 1999, is still recording data on the Earth twenty years later. The mission observes how the spheres of Earth fit together and change over time.

The dry winter and spring season of 2019 preceded the violent fire season, leaving foliage vulnerable to burning. Experts point to the Indian Ocean Dipole as one cause of the significant drought.

A typical fire season in New South Wales, Australia, extends from October through March. The 2019-2020 season not only began a month early but by one month in has already reportedly burned more earth than the previous two years together.

While 80,000 hectares burned in Australia’s national parks in 2018, so far this season 10 times that — 1.9 million total hectares — have been affected.

In New South Wales alone 12 of 28 world heritage reserves have been impacted.

Rising temperatures, lack of humidity and an unusual drought bear a large part of the blame for the spate of fires. Surrounding cities like Sydney not only face dangers from the fires but also the dangerous air quality from the smoke.

By mid-December, an area the size of Maryland — some 27,000 square km, were scorched in New South Wales.

Smoke and pollution from the multitude of fires have been streaming across the country for weeks, engulfing coastal towns and cities, endangering residents.

Parts of Sydney, Australia, has been experiencing hazardous air quality levels for weeks and at least 50 people have been treated for complications from the smog.

Smoke from the hundreds of fires burning across the country pours off the coast and across the southern Pacific Ocean.