It’s a mission that has existed in the shadows, seizing control little-by-little – and now China’s ultimate plan is almost complete.

The battle for the South China Sea is heating up. Vietnam. Malaysia. The Philippines. All have drawn lines in the sandbars against China. But it may already be too late.

This past year, Vietnam stood its ground over the right to deploy an oil rig within its UN-mandated waters. Malaysia complained publicly of interference by the Chinese coastguard. The Philippines moved to secure its Scarborough Shoal islands. And, all the while, new nations have been joining the Freedom of Navigation pushback over Beijing’s claims to the South China Sea.

China’s aggressive military moves have forced members of the traditionally timid Association of Southeastern Nations (ASEAN) to reassess their stance.

Many are already focused on modernising their armed forces, with defence spending in the region doubling over the past 15 years. That spending is moving away from counter-terrorism efforts towards higher-level conventional warfare.

But nations like Singapore, Malaysia and Thailand are beginning to realise they cannot stand alone. September marked a seismic shift in the region’s thinking.

Ten Southeast Asian nations joined the United States Navy in five days of war-games. While it involved only eight warships and four aircraft, it marked an unprecedented step down the path towards regional unity.

But Chairman Xi Jinping’s bellicose assertion of his nine-dash-line South China Sea policy is yet to be checked. 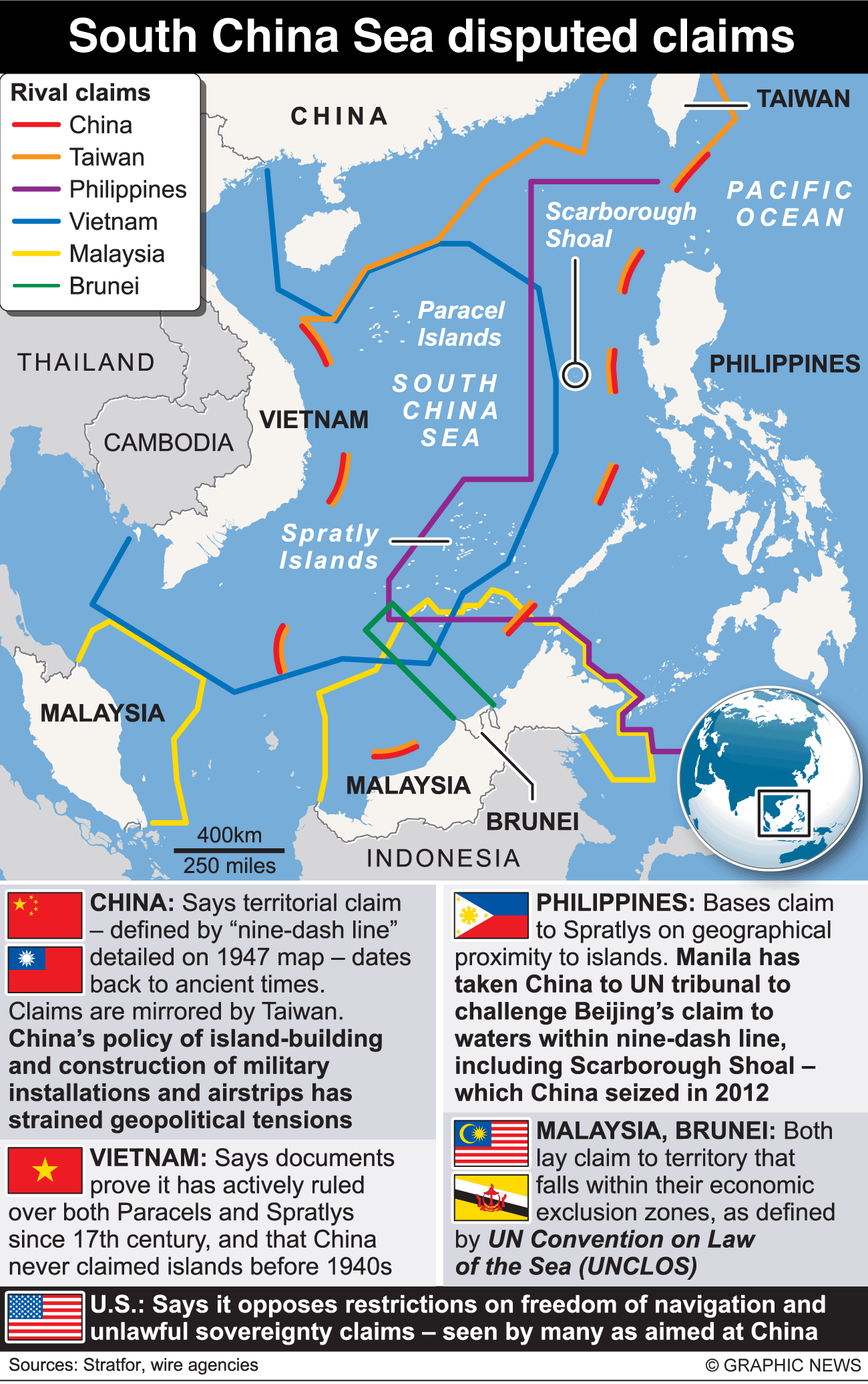 VIETNAM ON THE FRONT LINE

Two Communist nations are at the forefront of the South China Sea crisis. Vietnam is defending its UN-mandated territorial rights. China has dismissed them.

Despite the immense disparity between the two nations’ economies and armed forces, Hanoi isn’t backing down. Instead, it has taken the lead among its Asian neighbours to assert its borders.

For four months, Vietnam’s tiny coast guard stood nose-to-nose against much larger Chinese vessels over the disputed Vanguard Bank oil and gas fields. Hanoi had hired a Russian firm to establish an exploratory rig. Beijing countered, using the guise of sea floor mapping to interfere with its operations.

Vietnam threatened to take the dispute to the same international court of arbitration that in 2016 rejected China’s claims over Philippine territory. Beijing was indignant at the suggestion, with a foreign ministry spokesman declaring Hanoi “needs to avoid taking actions that may complicate matters or undermine peace and stability in the South China Sea as well as our bilateral relations”.

Mischief Reef is just one of a series of illegal fortresses China has built in the disputed South China Sea. Picture: Ritchie B. Tongo/Pool Photo via AP, FileSource:AP

It’s a stance the United States is keen to encourage.

“We will not accept attempts to assert unlawful maritime claims at the expense of law-abiding nations,” US Defence Secretary Mark Esper said in a November visit to Hanoi. “The United States firmly opposes intimidation by any claimant to assert its territorial or maritime claims, and we call for an end to the bullying and unlawful activities.”

He then announced the supply of surplus US Coast Guard vessels to bolster Vietnam’s fleet.

“Hanoi could also continue to grow and deepen its web of defence ties with ASEAN countries, Australia, Japan, and Indi,” Mr Grossman says. “Getting those countries to speak up during the next crisis – none did so this time – will be a challenge but not impossible.”

And many analysts argue that crisis may be just around the corner.

“The PRC is currently consolidating and normalising control of the SCS seized in 2015 following 20 years of hybrid warfare,” former ADF intelligence analyst Dr Mark Baily warns in an essay published by the Australian Naval Institute.

Their existence represents both a strategic and ideological victory for Beijing.

The island fortresses extend the range of combat aircraft, ships and missiles. They also act as surveillance platforms over any shipping that passes through the South China Sea.

“China’s facilities have probably already reached a level of capability that no outside combatant which enters the South China Sea, however covertly, can be completely confident it is not being tracked,” says Professor James Goldrick of UNSW Canberra.

And there is danger in thinking of the island fortresses as China’s “great wall of sand”. It entrenches Beijing’s goal of “regarding the waters that lie between them and the mainland as Chinese territory”.

Whether or not these islands are unsinkable aircraft carriers or immovable targets is irrelevant, Mr Goldrick says. “They’re a very public statement of China’s power under its nationalist narrative of “reunifying a supposed ideal Chinese nation-state on equally supposed ideal historical boundaries”.

China is slowly but surely shoring up its hold of the region. Picture: SuppliedSource:Supplied

Dr Baily highlights this is the second time the South China Sea has fallen under the strategic control of one regional power. It started with Japan and Britain jostling for diplomatic influence during the 1930s. It escalated into base building and military posturing. It climaxed with the defeat of the British at Singapore and the destruction of the US fleet at Pearl Harbor.

“The loss of strategic control of the South China Sea has destabilised the region and revealed the PRC to be intent on regional hegemony. This mirrors the strategic situation of the 1930s, which generated a major regional war by 1937 and expanded to general war in 1941. This level of strategic risk is without precedent since the late 1950s and requires responses dormant in Australia since that era.”

The objective of Beijing’s South China Sea actions are clear, he argues: “A trade route is being garrisoned via fortress building.”

It’s almost too late to stop China’s aggression in the region, which began 15 years ago. Picture: Ted Aljibe / AFPSource:AFP

As a result, Dr Baily says, regional nations must band together to block China’s next expansionist ambition.

“While the danger has been recognised 15 years too late, initiatives such as the Indo-Pacific Maritime co-ordination cell may help prevent losing strategic control of the Indian Ocean.”

With the South China Sea virtually secured, Beijing is expected to further ramp up its activities in the southern hemisphere. Particularly, the “belt” between the Persian Gulf and China, along which 43 per cent of its oil supply flows.

“This helps explain PRC territorial aggression in the SCS and efforts to dominate the Indian Ocean as part of its Belt and Road Initiative,” Dr Baily warns. “The Chinese Communist Party (CCP) is acting on national sovereign requirements which ignore the ‘rules-based international order’.”

Jamie Seidel is a freelance writer. Continue the conversation @JamieSeidel