Dominic Rushe in New York and Benjamin Haas in Seoul

Europe has warned Donald Trump to expect retaliatory strikes against American icons like Harley-Davidson, Levi’s jeans and Kentucky bourbon, if he sparks a trade war by going ahead with punitive US tariffs on foreign steel.

The European commission president, Jean-Claude Juncker, warned there would be consequences for the US if Trump’s threat of a 25% tariff on steel and 10% on aluminium imports takes effect.

“If the Americans impose tariffs on steel and aluminium, then we must treat American products the same way,” Juncker told German television stations.

“We must show that we can also take measures. This cannot be a unilateral transatlantic action by the Americans,” he said. “I’m not saying we have to shoot back, but we must take action.

“We will put tariffs on Harley-Davidson, on bourbon and on blue jeans – Levi’s,” he added.

His warning came as the International Monetary Fund said that Donald Trump’s plan would cause international damage – and also harm America’s own economy.

“The import restrictions announced by the US President are likely to cause damage not only outside the US, but also to the US economy itself, including to its manufacturing and construction sectors, which are major users of aluminium and steel,” the IMF said.

Other world leaders also threatened retaliation. The Canadian prime minister, Justin Trudeau, said US tariffs would be “absolutely unacceptable” and China too expressed “grave concern” over the plans.

Japan’s steel industry also urged Trump not to impose steep tariffs on imports, warning it would have “serious harmful effects” on trade worldwide.

Meanwhile, the US president breezily asserted that “trade wars are good”. In a morning tweet Trump wrote: “When a country (USA) is losing many billions of dollars on trade with virtually every country it does business with, trade wars are good, and easy to win. Example, when we are down $100 billion with a certain country and they get cute, don’t trade anymore-we win big. It’s easy!”

Trump’s announcement sent stock markets around the world tumbling and could prompt other countries to take action. 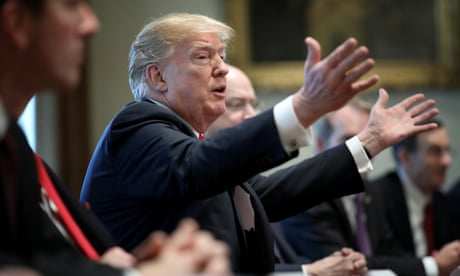 “The Chinese side expresses grave concern,” the ministry of commerce said. The statement did not mention any retaliatory steps but encouraged Washington to solve disputes through negotiation. Chinese officials have previously said they would take “necessary measures” to defend national interests.

“The imposition of a tariff like this will do nothing other than distort trade and ultimately, we believe, will lead to a loss of jobs,” said the Australian trade minister, Steven Ciobo. “My concern remains that on the back of actions like this we could see retaliatory measures that are put in place by other major economies. That is in no one’s interest.”

The news met with mixed reaction in the US too. The Business Roundtable, one of Washington’s most powerful lobby groups, said it “strongly disagrees” with the decision “because it will hurt the US economy and American companies, workers and consumers by raising prices and resulting in foreign retaliation against US exporters”.

But Robert Scott, senior economist at the left-leaning Economics Policy Institute said tariffs were “long overdue”. “Trump promised quick action after announcing investigations of the national security threats imposed by steel and aluminum imports nearly a year ago. Delays worsened the import crisis for thousands of US steel and aluminum workers, many of whom are facing layoffs and plant closing announcements,” he said.

Trump frequently singled out China for criticism during his election campaign, saying the trade relationship was “the greatest theft in the history of the world” and comparing it to “rape”. He also pledged to protect the US steel industry but this is the first major step in fulfilling those promises.

Canada has the largest share of steel imports to the US at 16%, according to data from the Department of Commerce. That is followed by Brazil and South Korea, with steel imports from China down 5% in the most recent period.