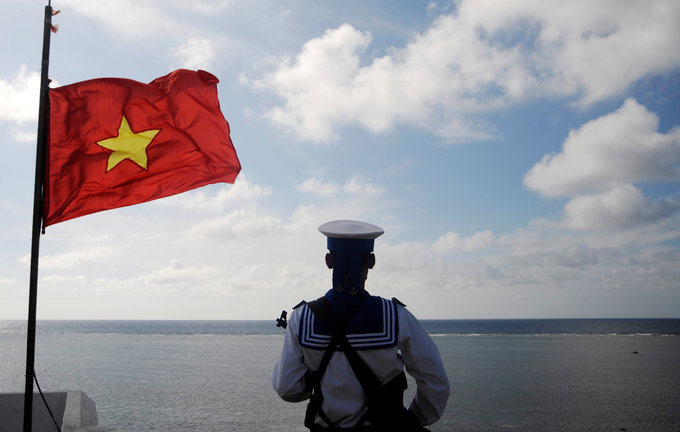 A Vietnamese naval soldier stands guard in the Spratly archipelago. Photo by Reuters

Defense officials debate whether the military will withdraw from money-making schemes.

It all started when Deputy Defense Minister Le Chiem said: “The military won’t do business anymore.”

Discussions about military-run businesses have never been on the table before, at least not in recent years, so his statement has drawn huge public interest and set off a debate, leading several high-ranking officers to step in to either correct or clarify the official stance.

Chiem was speaking at a meeting with Ho Chi Minh City’s leaders on June 23, during which he promised that the military would transfer all land that does not serve defense purposes to the city for development. The offer coincides with a proposal to bulldoze a 157-hectare (390 acres) golf course currently owned by the military to expand Tan Son Nhat, which is the country’s largest airport and currently operating at 30 percent over capacity.

The military will focus on defense purposes only, he said.

“All military businesses will be privatized and divested,” he added.

Many people hailed the statement as “a wise decision,” saying the military should focus on defense and not capitalize on its special position to disrupt competition.

But others said the military should be able to sustain itself, so there’s nothing wrong with it being involved in business during peace time.

Vo Hong Thang, director of the ministry’s Economic Department, is part of the latter group.

He told VnExpress last Thursday that to the military, “economic development is a basic task and a long-term strategy.”

During a visit to Viettel in Hanoi the next day, Defense Minister Ngo Xuan Lich also said economic commitment is a military tradition, and that it plans to open more businesses like Viettel, its most successful investment.

“It’s the driving force behind the telecommunications boom in Vietnam,” he said.

The company, which has several overseas ventures and also expanded into e-commerce last year, earned more than VND226.5 trillion in 2016, with VND43.2 trillion in pre-tax profit.

Then it was Deputy Minister Nguyen Chi Vinh’s turn. He said at another press briefing last week that in the long term, the military would only focus on businesses that directly serve defense purposes, including manufacturing weapons and propaganda.

He said that the ministry plans to reduce its current 88 businesses to 17, as cited by Tuoi Tre (Youth) newspaper.

It also plans to stop using any more military land for business purposes, he said.

A clear and final message from the military has yet to materialize.

Some experts think that Vietnam is possibly following in the steps of its giant neighbor China, which imposed a national ban in 1998 prohibiting armed forces and armed police from running businesses.

They were still allowed to use surplus resources to provide paid services to the public in certain fields, but the Chinese government issued an order to end that practice in May this year.