Locally known as Pag-asa, meaning hope in Tagalog, Thitu is a tree-studded settlement no more than 1.5km long and 800 metres wide. A dilapidated runway takes up almost half the area.

It sits within sight of Subi reef, part of one of Beijing’s most rapidly developing military projects – a series of controversial giant bases across the South China Sea.

With Donald Trump’s top adviser warning of an imminent war over these contested waters and China angry over US training exercises in the region, this tiny island could be one of the flashpoints for a potentially global and devastating conflict.

Few, if any, stretches of ocean are more heavily militarised by so many different governments. Vietnam, Taiwan, Malaysia, Indonesia, Brunei and the Philippines claim parts of the South China Sea, with US backing. Beijing asserts ownership of most of the area through which about $5tn in ship-borne trade passes annually.

On 19 May, Philippines president Rodrigo Duterte said China had threatened to go to war if he pushed the South China Sea issue. “Well, if you force this, we’ll be forced to tell you the truth. We will go to war. We will fight you,” Duterte quoted Chinese president Xi Jinping as saying at a meeting, without giving further details.

Within the past year, Subi reef has installed surface-to-air missile sites, reinforced fighter jet hangers and a 3km runway capable of handling some of the largest bombers in China’s airforce.

Thitu’s residents know they must live by China’s rules to remain here, where the armed forces of a host of countries are in a dangerous dance with Beijing.

The investigations swirling around Donald Trump – a short guide

“We are not being harassed,” said Roberto Del Mundo, the mayor. “The Chinese fish here near us. We can also fish, but only around our area. Our boats can’t go near [Subi reef]. Military planes are also shooed away if they get near.”

There was a time when Filipino civilians lived here almost oblivious to the maritime dispute that sparks on-again-off-again tensions in the region.

The settlers on Pag-asa mainly belong to two groups – former soldiers like Del Mundo who were once deployed here and came back to build a home, and residents of nearby mainland Palawan who accepted a job on the island.

Residents receive food packages. There’s a school building for the children. And there is work at the municipal hall if they want luxuries such as cable TV.

Thitu, one of the biggest naturally occurring islands in the disputed South China Sea, is now dwarfed by Subi reef, 6km long. Residents say it shines bright at night.

Eugenio Bito-onon, a former mayor who now lives off the island, spoke of a period when fishermen could still go to Subi. Chinese officers, when they were in a good mood, occasionally welcomed Filipino fishermen inside the reef that previously had just a garrison, helipad and lighthouse.

“Our fishermen would wave at the Chinese officer and if he waved back, it means they could fish in the reef … They just started shooing us away from Subi reef in recent years,” Bito-onon said.

Events have changed dramatically in the past five years. China signalled renewed aggressiveness in the South China Sea in 2012 when it took practical occupation of Philippine-owned Scarborough shoal in its bid to control the disputed seas.

It was an incident that prompted Manila’s legal territorial case against Beijing in The Hague. China’s island building followed.

In July 2016, the court junked China’s sweeping claims, but Beijing said it does not recognise the ruling and a newly installed Duterte, closer to China than his predecessor, has not made much of the court verdict.

In April, he announced a plan to personally raise the Philippine flag on Thitu and fortify it with barracks in celebration of Independence Day on 12 June, in the area the country calls West Philippine Sea.

But a week later he cancelled. “Because of our friendship with China and because we value your friendship I will not go there to raise the Philippine flag,” Duterte said at the time.

He instead sent his defence secretary, Delfin Lorenzana, to check on the situation in the island. His C130 plane received radio challenges from China four times. 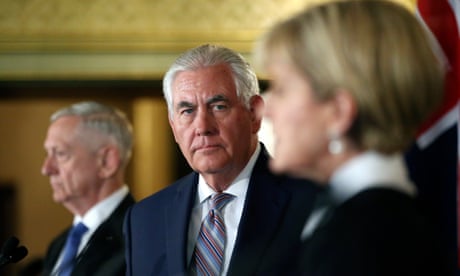 However, it is not only China whose ships sometimes chase civilian boats. Thitu resident Aisa Balidan said she got a scare when a Vietnamese vessel tailed their boat a few months ago as she returned to the island from mainland Palawan.

The residents consider these incidents isolated. They can always catch the next ship back to the mainland if they no longer want to live on the island. But why leave when jobs are scarce on the mainland and residents here get subsidies from government?

Still, the danger sometimes crosses their minds, especially when they hear in the media about tensions nearby. And all the time, the scene is set for a larger conflict.

Trump’s chief strategist at the White House, Steve Bannon, said months before he entered office that there was “no doubt” the US and China will fight a war within a decade over islands in the South China Sea.

“We’re going to war in the South China Sea in five to 10 years,” he said in March 2016. “There’s no doubt about that. They’re taking their sandbars and making basically stationary aircraft carriers and putting missiles on those. They come here to the United States in front of our face – and you understand how important face is – and say it’s an ancient territorial sea.”

More recently, secretary of state Rex Tillerson said the US would deny China access to the seven artificial islands. Experts warned any blockade would lead to war.

Residents of Thitu do not understand much about how Philippine presidents have constantly shifted their strategies on dealing with China. But, living on the frontline of the dispute, they can measure the success or failure based on what they see.

They see China turn reefs into cities while their runway in Thitu gets dilapidated over the years. The island doesn’t even have a pier or a harbour.

“We were the first to develop our island and build a runway. Now we are left behind,” said Bito-onon. “We are retreating while they are advancing. Our facilities are crumbling out of neglect while our neighbours improve their own.”

Carmela Fonbuena is a senior reporter at Rappler.com