Thousands of children are languishing in “dangerous and harrowing” conditions in detention centres across south-east Asia, a report has revealed. Children, including babies, are being held in cells 24 hours a day, alongside dozens of unrelated adults, and are frequently separated from family members.

More than 2,290 young refugees were being held without proper access to food, adequate health facilities or education in Thailand, Malaysia and Indonesia at the end of 2016, according to a joint report (pdf) by Save the Children and the Asia Pacific Refugee Rights Network. 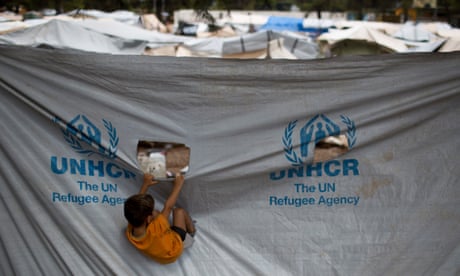 The countries are key transit routes for hundreds of thousands of refugees seeking asylum in south-east Asia and Australia after fleeing violence, poverty and conflict in countries such as Afghanistan, Bangladesh and Myanmar.

However, they are often intercepted during these journeys and treated as illegal immigrants by the authorities. They are detained for indefinite and sometimes lengthy periods without any judicial oversight, the report found.

“These children should not be treated like criminals,” said Mike Novell, Save the Children’s interim director for Asia. “The impact this type of environment has on children is extremely damaging. It can lead to developmental delays and self-harm while putting children at the very real risk of violence, sexual abuse and exploitation.”

The report, based on an analysis of immigration policies and interviews with a small number of child detainees, found young people held in “cramped and substandard conditions” were often forced to sleep on the floor or on cardboard and given “unpalatable” food.

In the most extreme cases, they were held in rooms so overcrowded that there was no space to lie down at night and fully extend their legs – or it was so hot that they found it difficult to breathe. Boys aged 12 or above were treated “as men” and children lacked privacy, were exposed to violence, and were deprived of outside space.

A boy named Elijah, who had been detained at the age of 10, told the report’s authors: “The toilets did not have any doors and in the shower they only had the tub, and where the tub was there were no walls.”

There have even been reports of some children dying from treatable illnesses due to lack of appropriate care and inadequate hygiene in the centres.

The detention of children for immigration purposes violates their rights under international law. But despite the significant human and economic costs, the undocumented detention of migrant children remains common in many countries.

In addition to the human toll, immigration detention is costly to run when compared with more humane and child-appropriate alternatives. The International Detention Coalition estimates that such alternatives may cost up to 80% less to run, as well as having many other benefits.

Evan Jones, programme coordinator at the Asia Pacific Refugee Rights Network, said the devastating physical and mental impact that detention is having on refugee children is entirely avoidable. He said: “Governments across the region must recognise this unnecessary practice is not sustainable and should prioritise the implementation of alternatives.”

The charity said the relevant authorities should consider adopting community housing or – for unaccompanied children – foster care, saying the alternatives were both cheaper and more humane.

In September 2016, global leaders condemned the detention of children for immigration purposes and pledged through the UN general assembly’s adoption of the New York declaration to work towards ending the harmful practice.

The report, Unlocking Childhood: Current immigration detention practices and alternatives for child asylum seekers and refugees in Asia and the Pacific, welcomed a decline in the number of child refugees being detained by 50% since 2014.

In particular, it notes the development of small-scale initiatives in Malaysia and Indonesia by local NGOs which are supporting unaccompanied and separated children in community settings. However, the two charities insist that governments across the region must move to end child detention entirely.

In addition to those living at detention facilities, tens of thousands of children across the region are being held in other forms of detention-like conditions or have faced serious restrictions on their freedom of movement due to their migration status.

The report says these include “those confined to closed refugee camps, closed shelters, police holding cells and isolated or remote locations”.

In Australia, where nearly all children have been released from immigration detention centres in recent years, the two rights groups have called for a review of the country’s laws that still allow the practice.

The stories you need to read, in one handy email

Australia has a complex and elaborate legal framework for responding to asylum seekers, in particular undocumented refugees who arrive by boat. The government began transferring asylum seekers using this route to the Pacific state of Nauru in 2001.

The South Pacific island, which quickly became known as a dumping ground for the unwanted arrivals, placed refugees including children in mandatory immigration detention until changes were brought in in October 2015.

The Nauru regional processing centre is now an “open centre” and currently home to 380 people (including 45 children) who are free to come and go during the day.