The Chinese premier, Li Keqiang, has warned China does not want to see a new cold war, emphasising that throughout his country’s history, peace has “always been the most precious thing”.

With increasing tensions in the South China Sea a significant backdrop to his visit to Australia, Li told parliamentarians in Canberra on Thursday that China did not want to see countries “taking sides, as happened during the cold war”. 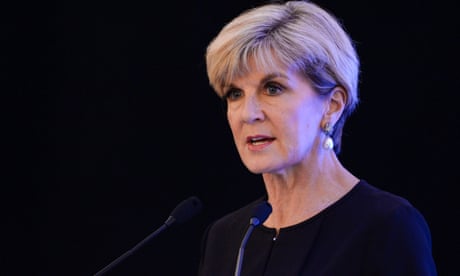 He said China respected Australia’s chosen foreign policies and that “as long as they are consistent with the United Nations charter and international rules – we will work together to maintain them”.

Li’s explicit warning against taking sides could be interpreted not only as broad ranging diplomatic advice to his host, but a rebuke to Australia’s foreign minister Julie Bishop, who recently argued the United States remained the pre-eminent global strategic power in Asia, and the “indispensable strategic power in the Indo-Pacific”.

In a rare negative public commentary about China’s political system, the Australian foreign minister also used her speech in Singapore in mid-March to suggest China’s lack of democracy was a constraint on the country reaching its full economic potential. Bishop is not in Canberra for the Chinese premier’s visit, instead attending a meeting in the US about the campaign against Islamic State.

With China’s assertive posture in the Asia Pacific region generating significant tensions, Li said Beijing was intent on executing a peaceful rise, and was not seeking to display dominance in the region. 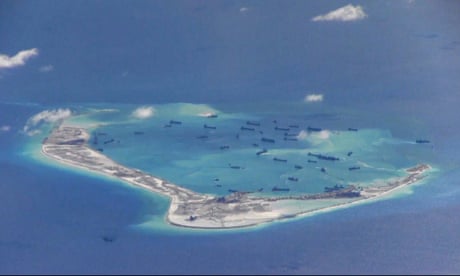 China close to finishing buildings on South China Sea islands that could house missiles, US says

He said China wanted to grow its economy, giving people a better life and boosting living standards, and that required “a stable regional environment and a stable world environment”.

“Throughout China’s history, peace is always the most precious thing,” premier Li said. “That is our tradition. Now China is firmly committed to being on the path of peaceful development.

“That is determined by our tradition, that is also driven by our reality and it will continue to remain so in the future and that serves the interests of not only the Chinese, but people across the world.”

Li said as China grows in the future, “we will never seek dominance,” and he said China stood ready to work with Australia “for peace in our region, for maritime navigation freedom and the freedom of overflight, and we will continue to do that”.

In Bishop’s Singapore speech, she noted China’s provocative behaviour in the South China Sea was one of the challenging manifestations of emerging geopolitical competition in the region, and said the region was anxious in the absence of a clear signal from the Trump administration.

China close to finishing buildings on South China Sea islands that could house missiles, US says

Bishop said the US did not have territorial disputes with other countries in the region, and the democratic and liberal rules-based order exemplified in the American political system reflected what Australia sought to “preserve and defend” in the region.

Bishop also issued a pointed warning that the importance “of liberal values and institutions should not be underestimated or ignored”.

“While non-democracies such as China can thrive when participating in the present system, an essential pillar of our preferred order is democratic community,” the foreign affairs minister said.

The Australian prime minister, Malcolm Turnbull, who welcomed Li to Canberra on Thursday before discussions on trade and regional security, said the two leaders would discuss the “importance of upholding and maintaining stability in our region”.

Turnbull said Australia and China would work together “to counter the rising tide of protectionism” but he noted that free trade could “only thrive in a peaceful and stable environment”.

“Both our countries know this well,” Turnbull said. “Australia and China have both benefitted immeasurably from the stability in our region that has been underpinned by the rules based international order.

“During this visit, premier Li and I will discuss, as we have before, the importance of upholding and maintaining stability in our region. We believe China has much to contribute to global peace and prosperity in this time of rapid change.”