Philippines president Duterte says: ‘I will not impose anything on China’ despite fresh report showing militarisation of disputed reefs

The Philippine president has said he would “set aside” a ruling by an international arbitration tribunal that invalidated Beijing’s claims to most of the South China Sea, because he doesn’t want to impose on China.

“In the play of politics, now, I will set aside the arbitral ruling. I will not impose anything on China,” Rodrigo Duterte said at a news conference on Saturday.

He made the comment when asked if a US thinktank report stating that China installed anti-aircraft and anti-missile weapons on its new artificial islands in the disputed waters would affect his perception of Beijing. The Philippines claims the reefs, which were turned by China into man-made islands.

Duterte, who took office in June, has taken steps to mend relations with China that grew hostile during the time of his predecessor, Benigno Aquino III, over the long-unresolved territorial disputes. The Aquino administration took the disputes to international arbitration in a move backed by Washington after China seized a disputed shoal in 2012.

He explained his position partly by repeating his threat to remove American forces out of the Philippines after the Obama administration criticised his government’s bloody crackdown on illegal drugs. 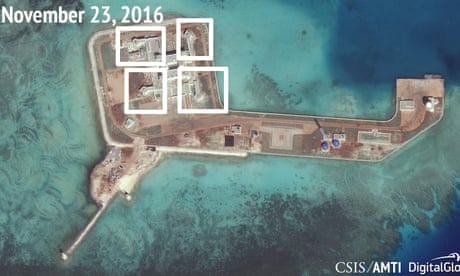 “I will demand that they go out of my country. What’s the use of keeping, hosting them when they think we are a bunch of criminals?” Duterte asked. “Go, go out. If you do not believe in us, why deal with us?”

Foreign secretary Perfecto Yasay Jr said on Friday the Philippines would not take any steps against China in response to the report by the Center for Strategic and International Studies late on Wednesday that China appears to have installed weapons to guard against missile attack on its seven newly created islands.

Asked if his department planned to issue any statement or ask China to clarify, Yasay said: “We want to make sure that there will be no further actions that will heighten the tensions between the two countries, particularly in the Scarborough Shoal.”

He was referring to a disputed fishing area off the Philippines’ north-western coast where tensions recently eased when the Chinese coastguard allowed Filipinos to fish after blocking them from the area since 2012. China’s change of tact came after Duterte met his Chinese counterpart, Xi Jinping, in Beijing in October.

Yasay told reporters in Singapore, where he and other officials accompanied Duterte on a visit: “There is nothing that we can do about that now, whether or not it is being done for purposes of further militarising these facilities that they have put up.”

“We cannot stop China at this point in time and say ‘Do not put that up.’ We will continue to pursue peaceful means at which all of these can be prevented,” he said.

His remarks differed from defence secretary Delfin Lorenzana, who expressed concerns about the thinktank report and said the government was attempting to verify it. “If true, it is a big concern for us and the international community who uses the South China Sea lanes for trade,” Lorenzana said Thursday. “It would mean that the Chinese are militarising the area, which is not good.”