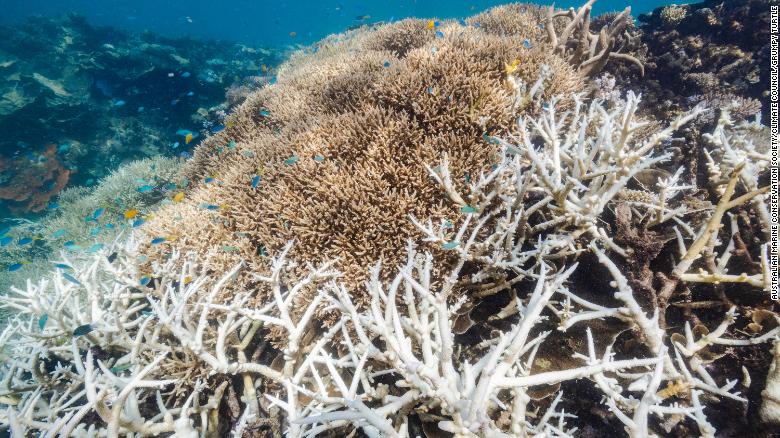 Coral at Stanley Reef, about 83 miles (133 kilometers) off Townsville in Queensland, shows signs of bleaching caused by rising sea temperatures.

(CNN)Warming waters from escalating climate change have caused coral bleaching in 91% of reefs surveyed along the Great Barrier Reef this year, according to new findings from an Australian government agency.

Scientists from the Great Barrier Reef Marine Park Authority (GBRMPA) confirmed in March this was the sixth mass bleaching event of the reef on record and the fourth since 2016.

Coral reefs are some of the most vibrant marine ecosystems on earth — between a quarter and one third of all marine species rely on them at some point in their life cycle. But the rapid warming of the planet due to human emissions of heat-trapping gases is causing above average water temperatures, leading to stress events like mass bleaching.

Coral bleaching tends to happen when water temperatures are much warmer than normal. But for the first time, this mass bleaching comes despite La Niña, a weather event which is characterized by cooler-than-normal temperatures across the equatorial Pacific Ocean, the Authority’s scientists said. 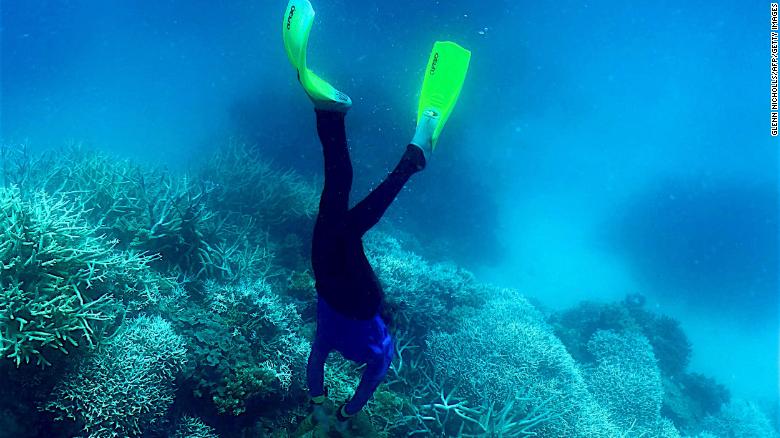 This picture taken on March 7 shows a diver swimming amongst the coral on the Great Barrier Reef, off the coast of the Australian state of Queensland.

The report surveyed a total of 719 reefs from a low flying aircraft during the Australian 2021-2022 summer season and found that 654 reefs, 91%, “exhibited some bleaching.”

The Great Barrier Reef’s waters started warming in December 2021 and exceeded “historical summer maximums.” It was hit by three distinct heat waves throughout the summer until early April 2022, which increased “thermal stress” throughout the reef’s central and northern areas, the report found.

Stressed coral ejects algae from within its tissue, depriving it of a food source. If conditions don’t improve, coral can starve and die, turning white as its carbonate skeleton is exposed.

The Great Barrier Reef is suffering a sixth mass-bleaching event. Here’s why scientists are concerned

“Even the most robust corals require nearly a decade to recover,” Jodie Rummer, associate professor of Marine Biology at James Cook University in Townsville, told CNN in March.

“So we’re really losing that window of recovery. We’re getting back-to-back bleaching events, back-to-back heat waves. And the corals just aren’t adapting to these new conditions,” she said.

The report warned that the climate crisis remains the reef’s greatest threat and “events that cause disturbances on the reef are becoming more frequent.”

It’s the fourth mass bleaching in six years and the first since 2020, when about one quarter of the reef surveyed showed signs of severe bleaching. That event came just three years after back-to-back bleaching events in 2016 and 2017. Previous bleaching occurred in 1998 and 2002.

Scientists say time is running out for the reefs to be able to recover and that governments urgently need to address the root cause: the climate crisis.

This picture taken on March 7 shows the current condition of coral on the Great Barrier Reef, off the coast of the Australian state of Queensland.

“To give our reef a fighting chance, we must deal with the number one problem: climate change. No amount of funding will stop these bleaching events unless we drive down our emissions this decade,” said Amanda McKenzie, CEO of the Climate Council in March.

The Great Barrier Reef is one of Australia’s national treasures, stretching some 1,400 miles (2,300km) down the Queensland coast, and attracting around three million tourists a year prior to the pandemic.

The Australian government has faced prolonged pressure from UNESCO to prove that it’s doing enough to save the reef and has been called out by global climate experts, among others, for not doing enough to transition Australia away from fossil fuels and slash greenhouse gas emissions.

The report’s publication comes after leading scientists called on the agency to release its findings before the federal election on May 21.