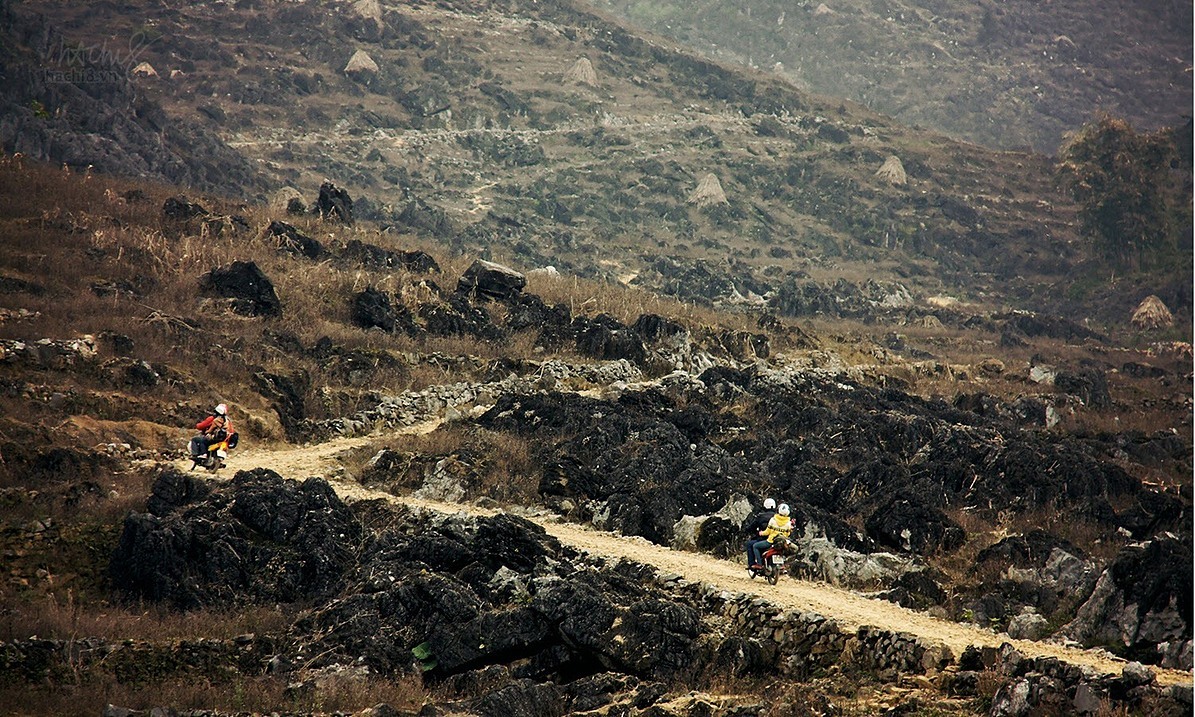 People drive on a rugged road in Ha Giang Province near China border, 2019. Photo by VnExpress/hachi8.

A Vietnamese man pretended to be seeking a wife in order to woo women and sell them into China.

He succeeded with at least one, and this case underlines some of the tricks of the trade being used by human traffickers, activists say.

Vu A Lenh, 30, met Lau Thi Say, 35, and her husband Sung Sinh Po, 42, when he was working in China. When she suggested that he tricks Vietnamese women and sell them in China, he agreed.

Lenh told his friends he was looking for a wife. In August 2019, he was given the phone number of a 34-year-old woman called Sin, who lived in the northern mountainous province of Tuyen Quang.

Lenh contacted with her via text messages and introduced himself, telling her that he lived in Meo Vac District in Ha Giang, around 160 kilometers from Tuyen Quang. Once he made contact, he asked Say and her husband to find customers to buy Sin. However, the couple told Lenh to trick her into China first so that they could arrange for customers to meet her before negotiating prices.

In September, Lenh dressed up and drove a motorbike to meet Sin in Yen Son District, where she lived. Lenh said he had been married, but was divorced and had no children. Touched by his story, Sin invited him home to meet her parents, but he declined.

After the first meeting, Lenh kept sending messages to Sin and promised to marry her, saying that after their marriage they would work in China.

Sin fell for Lenh’s sweet words. A few days later, Lenh met her for the second time and asked her to marry him. When she asked him to ask her parents for permission, as is the norm in Vietnam, Lenh pretended to be angry. He tried to persuade her to accept without her parents’ consent, but failed.

Lenh did’t give up. About two weeks later, he called Sin and promised to go to her house and seek her parents’ approval for their marriage. He also said he would take her to his home in Ha Giang to meet his parents.

On September 14, Lenh came by himself to pick Sin up, but refused to go to her house and greet her parents. He told her that according to the custom in his homeland, parents’ permission was not needed for a marriage. A couple would get married and announce it to their parents.

Somewhat convinced, Sin agreed to go with Lenh. Before leaving, she used her phone to take a picture of Lenh and his motorbike and sent the images to her elder cousin via Facebook.

On the way to Ha Giang, Lenh called Say and Po. He asked them to sell Sin for VND38-42 million ($1,640-1,812), claiming she was a virgin. Lenh and Say fixed a dawn rendezvous at the Vietnam-China border landmark in Thuong Phung Commune, Meo Vac District.

On September 15, Lenh took Sin to the border area and introduced Say and Po as his parents. He also introduced Sin to them as their daughter-in-law. When Sin showed some doubt, Say affirmed that they were indeed Lenh’s parents.

As planned earlier, Lenh told Sin that the road ahead had a funeral and passing through the area would bring bad luck. He also apparently convinced her to go along with his “parents” and that he would follow them on his bike. How this happened is not clear.

Sin paid the price for trusting Lenh. She went with Say and Po into China. The same night, Say called Lenh, saying that Sin was quite ugly and was not yet sold. Lenh urged that the transaction be speeded up and he be paid soon.

After Sin went missing, her family complained to the local police. More than a month after she was captured, Sin managed to escape and return to Vietnam.

Based on Sin’s testimonies, police arrested Lenh and Po, but Say escaped.

Three months ago, Lenh and Po were sentenced to 8.5 and eight years in prison, for human trafficking.

Lieutenant Colonel Hoang Minh Tuan, a police officer in Tuyen Quang, said Lenh was a good looking man who would find it easy to charm many women.

He would approach women, pretend to fall in love with them and promise to marry them, and when the victims accept his proposal, he would trick them to meet his parents but instead sell them to human traffickers, Tuan said.

Not new, but dangerous

Australian Michael Brosowski, founder of Hanoi-based nonprofit organization Blue Dragon, told VnExpress Wednesdaythat the issue of Vietnamese girls and young women being deceived by men is not new and it could have very dangerous consequences.

“In 2020, even with Covid-19, many young women are being manipulated by traffickers, who one day invite them to go to China. The men have many excuses prepared for why they are going to China. Some say it’s a quick holiday or shopping trip; some will say it’s to see family or to collect money from their former company. It always sounds very believable, and the trafficker does this only after they have formed a strong relationship with their victim,” he said.

Though human trafficking victims are typically from northern mountains provinces that share a long border with China, Blue Dragon is seeing victims from all around the country, including the southernmost provinces, he said.

“Traffickers are prepared to take people a very long distance, because even though that costs more money, it makes it harder for the victim to escape, and the trafficker can still earn a lot,” he explained.

Vietnam is a human trafficking hotspot with the crime generating tens of billions of dollars annually, according to the Ministry of Public Security.

The country has recorded over 3,400 victims of human trafficking since 2013, over 90 percent of them women, children and people from ethnic minority communities.

Eighty percent of victims end up in China, which suffers from one of the worst gender imbalances due to its one-child policy and illegal abortion of female fetuses by parents who prefer sons, leading to increasing trafficking of Vietnamese women and baby girls to that country.Related News: