From July 15 to 30, SCSPI’s Weibo account has released a total of 24 updates on the activity tracks of US warships and warplanes in regions including South China Sea and East China Sea. This has attracted wide domestic and foreign attention.

In an exclusive interview with the Global Times reporters Liu Xuanzun and Guo Yuandan on Thursday, Hu Bo, director of SCSPI, introduced why the SCSPI platform releases the information to the public, and the characteristics of US military activities in the South China Sea.

The guided-missile frigate Qujing (Hull 508) under the PLA Southern Theater Command fires its main gun against sea target during a maritime training exercise in waters of the South China Sea on July 11, 2020. Photo: Chinamil.com.cn

SCSPI is an open think tank and cooperative network of Chinese and foreign scholars aimed at comprehensively and objectively grasping the dynamics and news in the South China Sea by accurately probing the military, political, economic and environmental situation there.

For the purpose of research, it has established its own system of monitoring maritime and aerial situation and is continuously tracking and releasing aircraft and vessel movements from countries within and outside of the region.

Speaking on the original intention of releasing US military activities in the South China Sea, Hu said that, “We do not want to create big news. We just want to objectively present the data and often we take no position.”

Hu said an imbalance exists in terms of information disclosure in the South China Sea, as the US releases a lot more information, so the outside world only sees a South China Sea situation shaped by the US  officials and think tanks.

“Our information releases caught so much attention and this is another indication of the lack of South China Sea information,” Hu said.

According to data released by SCSPI, in July, the US military conducted 67 reconnaissance sorties in the South China Sea with large reconnaissance aircraft, ranging from multiple types of warplanes including P-8A and P-3C anti-submarine patrol aircraft. “Even so, what we have been able to monitor and release was only a tip of the iceberg,” Hu said.

“Our job is data mining. From the vast original data, we have set relevant parameters, so we can automatically gather data related to the South China Sea strategic situation, like those on warships, warplanes, public service vessels and fishing boats, and make statistics and analyses based on that,” Hu said.

Since the data sources and approaches are relatively simple, the data’s accuracy, completeness and stability cannot match official data from internal systems of related countries, he said.

“For instance, we can only track parts of trails by large reconnaissance aircraft, but not small ones. Neither can we track activities by aircraft carrier-based warplanes. And if warplanes do not open ADS-B transponder, we will be unable to track them.” Two JH-7 fighter bombers attached to an aviation brigade of the air force under the PLA Southern Theater Command taxi in close formation before takeoff during an assault flight training exercise on July 21, 2020. Photo: chinamil.com.cn

Characteristics of US military activities in South China Sea

SCSPI’s tracking data show that the US military has significantly increased large reconnaissance aircraft activities in July compared to May’s 35 and June’s 49. July’s figure 67 is almost twice as many as May’s.

Reports show that since 2009, the US military has significantly enhanced the frequency of activities in the region by boosting the presence of surface vessels by more than 60 percent, reaching about 1,000 ship-days a year. In the air, it sends on average three to five warplanes to the South China Sea a day, most of them being reconnaissance aircraft, making a total of more than 1,500 sorties a year, almost twice as many as in 2009.

In addition to this, US military activities have also become more pointed to China.

These kinds of close-up reconnaissance are obviously provocations, as “since the US military has all-round, advanced reconnaissance technologies, such a high frequency aerial reconnaissance and close distance would not be necessary if it just wants to gather intelligence on China,” Hu said.

Hu said “the reason behind the significantly increased US aerial reconnaissance in 2020 could be related to the COVID-19 outbreak. Since many US warships suffered from group infection events which resulted in a lack of warships, the US might have opted to enhance aviation reconnaissance.”

Hu pointed out that out of the strategic thinking of great power competition, the US is applying prejudice and judging others. It worries about China’s presence in the South China Sea during the pandemic, so it increased military deployment. “US military deployments and activities in the South China Sea took 60 percent of its  forward deployed forces troops in the Indo-Pacific region,” Hu noted. 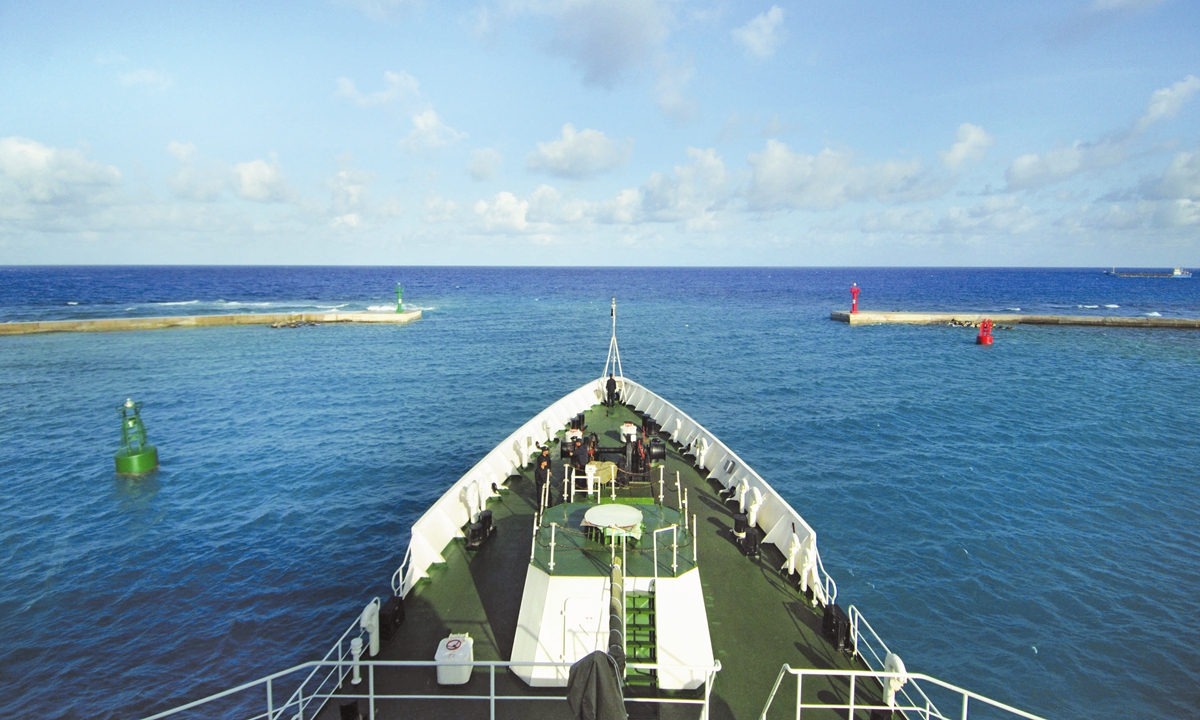 According to tracking data, the types of US aircraft that have appeared in the South China Sea have reached a rare level compared to other regions in the globe, as the E-8C battlefield command and surveillance aircraft and E-3B early warning aircraft are frequently appearing above waters near China, Hu said.

On the other hand, with China’s capabilities rapidly rising in the recent years, particularly its Navy and Air Force, the encounters between China and US military forces are becoming more frequent. Every day there are several encounters and thousands of them each year. Most of them are handled professionally and safely and only a small amount of them are risky, according to Hu.

Hu said that there are mainly three kinds of risks. While the Chinese and US militaries have a series of codes including Code for Unplanned Encounters at Sea to avoid risks, these rules are set up for literally unplanned encounters.

In reality, many encounters are intentional: First, US warships frequently trespass into waters within 12 nautical miles of islands and reefs of China’s Nansha Islands or territorial waters and inland waters of Xisha Islands, and China has to expel and intercept them, in which no guarantee could be made that no accident will occur during confrontation.

Third, both China and the US conduct all kinds of military training and exercises every year, and both sides usually would conduct reconnaissance and monitoring on each other. This is understandable on a military perspective, but frictions are bound to occur if distance is not well kept. In December 2013, when China’s Liaoning aircraft carrier task group was training in the South China Sea, USS Cowpens cruiser sailed abnormally close and crossed into the Chinese flotilla, and a Chinese landing ship was left with no choice but to force the US ship to a stop. The closest distance was only 50 meters.

In recent years, the US has been paying increasingly less attention to safe distance, and a crisis would very easily take place, according to Hu.

“Given the current overall relations between China and the US, if any maritime or aerial accident takes place, the friction could likely not be effectively managed and result in an escalation. Therefore, the uncertain factors in Chinese and US militaries’ interactions in the South China Sea are large, and the risks are becoming higher,” Hu said.