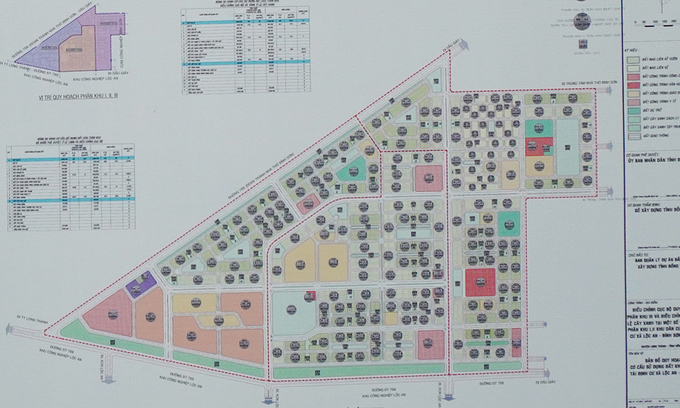 An artist’s impression of the Loc An – Binh Son resettlement area for residents affected by the Long Thanh International Airport project in Dong Nai Province. Photo by VnExpress/Phuoc Tuan.

Work began Monday on a 280 hectare resettlement area for the Long Thanh International Airport project, with residents set to receive their land lots in August.

The Loc An – Binh Son resettlement area, located in the southern province of Dong Nai, where the new airport is to be built, consists of over 5,000 land lots for 29,000 residents.

Dong Nai authorities will build roads, utilities, schools, markets, community centers and religious facilities before handling the land lots to residents to construct their own houses.

The first 700 households are set to receive their land lots in August.

This is the first of two resettlement areas that will be built for residents affected by the Long Thanh Airport project.

The total resettlement cost is estimated at over VND23 trillion ($981 million).

Dong Nai authorities last week approved the compensation rates for land to build the airport ranging from VND161,000 ($7) to VND6.5 million ($277) per square meter. Residents are expected to receive the money in May.

The Airports Corporation of Vietnam (ACV) had said earlier that construction of the first phase of the airport could begin in May 2021 and be completed late 2025 in case it is assigned to be the project investor.

Last November, over 90 percent of lawmakers voted in favor of a government proposal to build the first phase of the Long Thanh International Airport. After the first phase is complete, the airport will have one runway and one terminal with the capacity of handling 25 million passengers and 1.2 million tonnes of cargo a year.

Investment in the first phase of Long Thanh is set to cost almost VND111.69 trillion ($4.8 billion). After all three phases of the airport are completed by 2050 at a total cost of VND336.63 trillion ($16 billion), it will be able to handle 100 million passengers a year, picking up overflow from the Tan Son Nhat International Airport in Ho Chi Minh City, which is currently operating at far above its designed capacity.