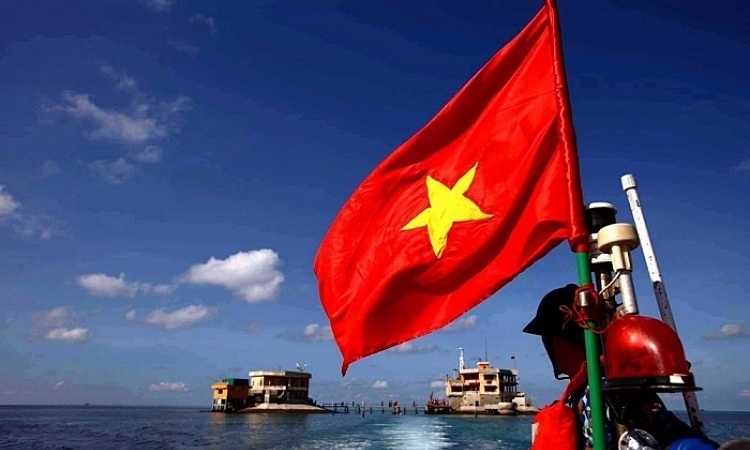 A Vietnamese soldier at the Spratly Islands. Photo courtesy of the World & Vietnam Report under Vietnam’s Ministry of Foreign Affairs.

Vietnam has rejected and protested China sending two diplomatic notes to the U.N., laying claim to Vietnamese territories in the East Sea.

One of the diplomatic notes was sent by China to the United Nations (U.N.) on March 23 in response to the Philippines. It claimed illegally that China has sovereignty over the Spratly Islands and adjacent waters, has sovereignty and jurisdiction rights over relevant sea areas, seabeds and subsoil. It also said that it has “historic rights” in the East Sea, internationally known as the South China Sea, based on “historical and legal evidences.”

The other note was sent December 12 last year in response to Malaysia. It also made the illegal claim that China has sovereignty over islands in the East Sea, including the Pratas, Spratly and Paracel Islands and the Zhongsa Qundao. What China calls the Zhongsa Qundao are the Macclesfield Bank and the Scarborough Shoal. China also mentioned its “historical rights” in the East Sea.

A diplomatic note sent by Vietnam’s Permanent Mission to the U.N. on March 30 said: “Vietnam protests China’s claims in the aforementioned diplomatic notes. These claims seriously violate Vietnam’s sovereignty and jurisdiction rights over the East Sea.”

Vietnam has full legal basis and historical evidence to assert its sovereignty over the Spratly and Paracel Islands in accordance with international law, the note stressed.

Vietnam considers the United Nations Convention on the Law of the Sea (UNCLOS) to be the sole legal basis that comprehensively and absolutely dictates the scope of rights over sea areas between Vietnam and China.

“Vietnam protests claims on the East Sea that go over boundaries as stated in UNCLOS, including claims regarding historical rights. These claims hold no legal value,” Vietnam asserted in is diplomatic note.

Vietnam’s consistent stance on the aforementioned issues has been affirmed multiple times in several documents issued at the U.N., as well as in statements sent to relevant international entities. Vietnam requests that the U.N. Secretary General issues its diplomatic note to all member nations of UNCLOS as well as members of the U.N., the note said.