On July 5, 2015, the first of six thermal power generation units at the Parli Thermal Power Station in Maharashtra, India shut down. Unable to draw enough water from the nearby Majalgaon dam, which had nearly run dry, the coal-powered unit was unable to run its cooling system and was forced to halt electricity production. This was just the start, as each of the five additional units subsequently shut down as well. Between July 2015 and December 2016, Parli stopped generating electricity entirely for 226 days solely due to water shortages, and during the days it wasn’t entirely shut down, it was largely paralyzed.

Imagine this picture replicated in other parts of India and around the world. Recent research is beginning to link climate change to drought, which suggests that risks to water availability will likely get worse.

Our research is part of a larger effort by WRI and other organizations to better understand and measure how climate-related risks can impact the financial system — including the performance of companies and investments — both now and in the future. Understanding this relationship will be critical to help market participants, companies, regulators and governments mitigate their risks and better focus their efforts to build resilience against the impacts of climate change.

We analyzed the effects of water shortages on five publicly traded Indian thermal power companies and found that in some cases, drought caused significant financial impacts from FY 2014-2017. In one quarter, water shortages caused Adani Power to lose 17% of its earnings (approximately $50 million), and in another, 6% (approximately $17 million). Water shortages caused generation outages in half of the quarters we analyzed, highlighting that this is a recurrent issue. 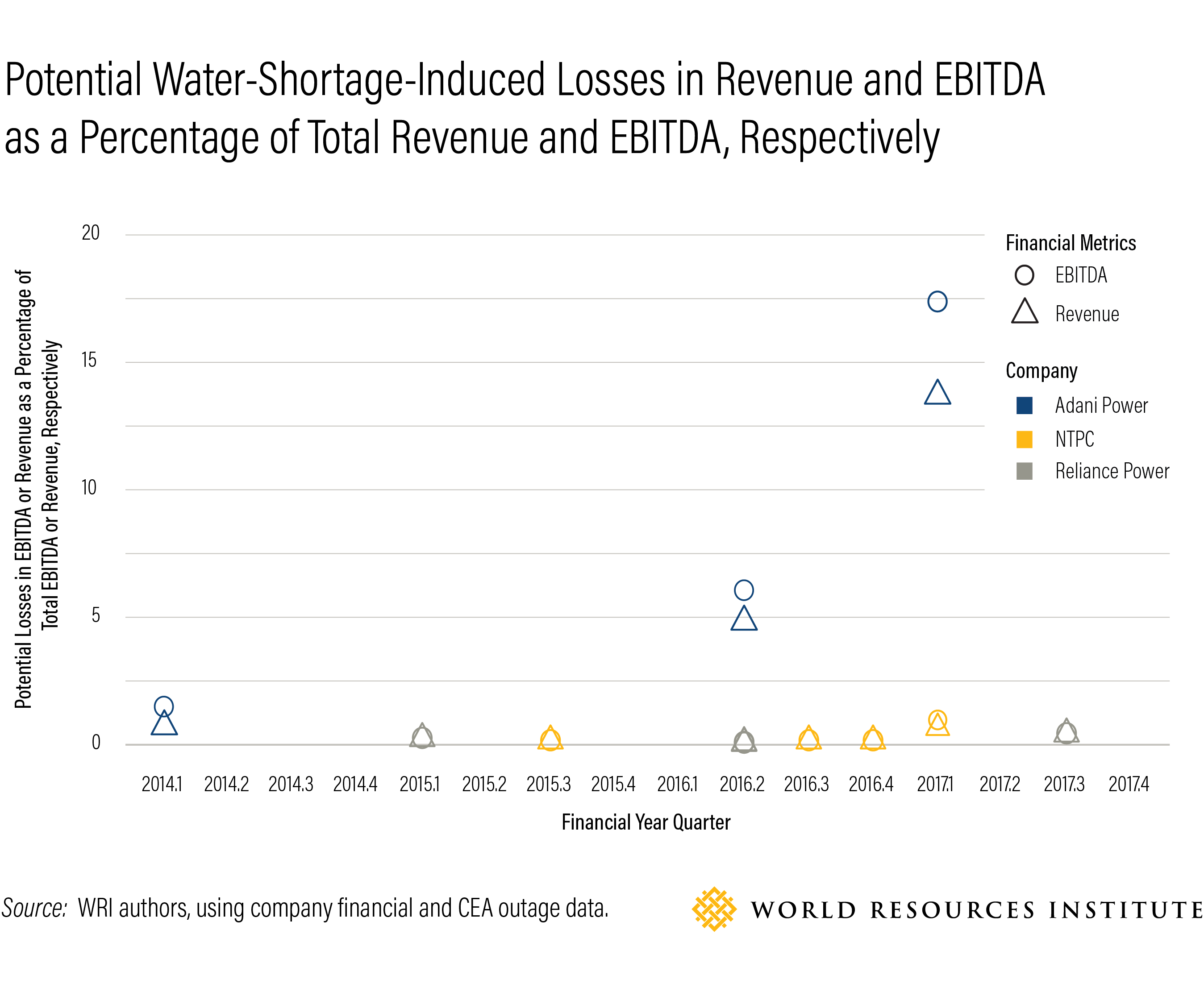 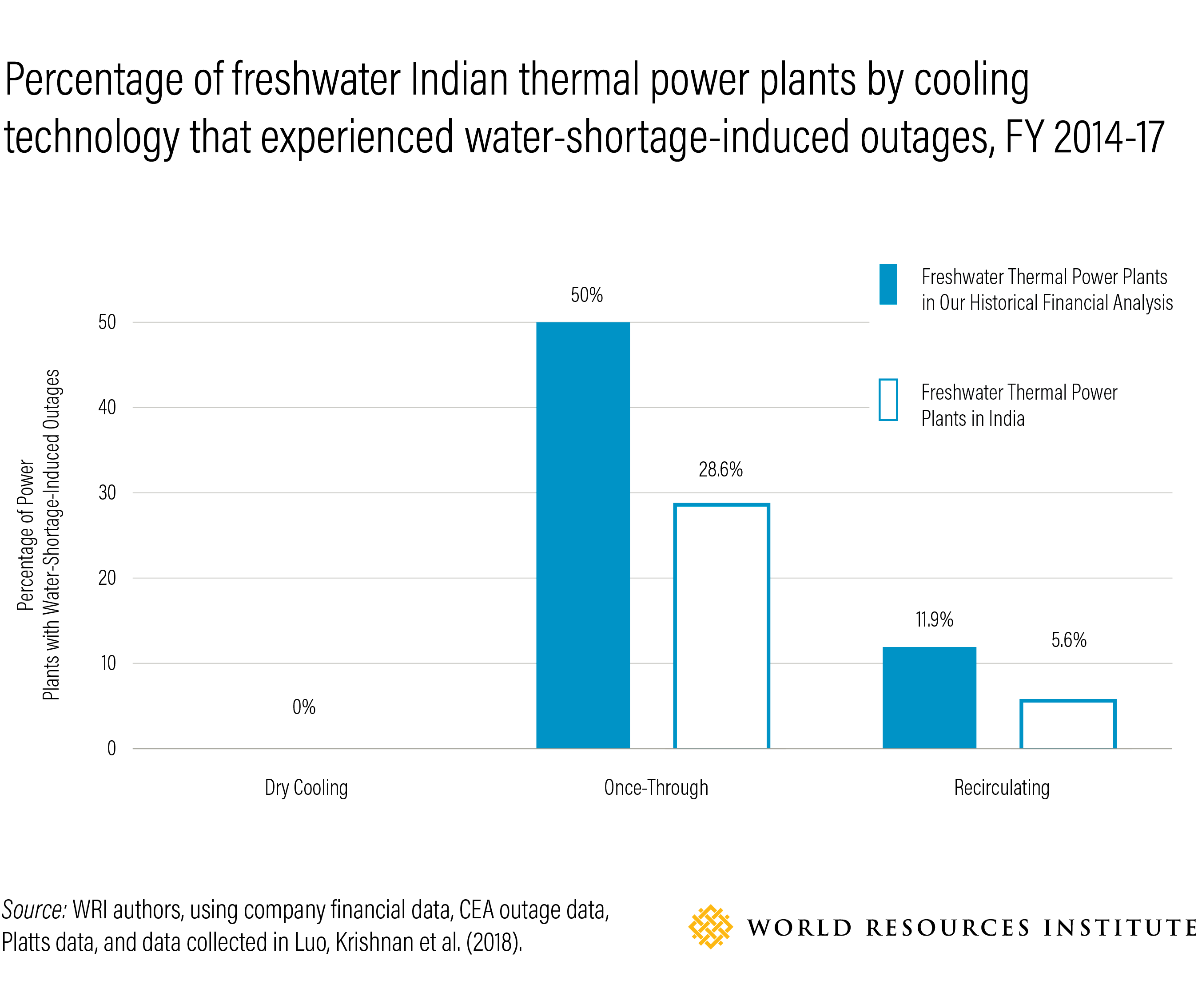 Investors refer to climate risks which pose direct physical impacts to the economy and to their investments as physical risks. These include water shortages. But overall, physical risks are not well understood. Better data and guidance is needed to account for the potential costs caused by physical risks.

A key insight from our research is about using the appropriate metrics to measure physical risks. Exposure to baseline water stress has emerged as a widely-accepted indicator for water risk. This measure is used or recommended by many investor-focused organizations, including the Task Force on Climate-related Financial Disclosures (TCFD).

Yet, though baseline water stress is a useful indicator to measure chronic water risk, it is not enough to provide a complete picture of a company’s water risk exposure. More information is often needed. We find that drought indexes are essential to supplement the TCFD’s recommended baseline water stress metrics if investors want to anticipate and manage drought risks at thermal power plants.  Drought indexes estimate relative dryness levels at specific locations using inputs such as precipitation, evapotranspiration, groundwater levels, and temperature.

How will future climate change influence drought? In our research, we use outputs from climate models to analyze potential future changes to water availability in India, which could increase the risk of water shortages. This exercise attempts to incorporate physical risks into forward-looking climate-related scenario analysis, as recommended by the TCFD.

We find that the impacts of climate change are highly uncertain across time and geography. Projections from some climate models suggest that drought could increase in many parts of India, while others find that water availability could improve. But in scenarios in which drought gets worse, companies could experience water shortage-induced generation outages as high as 2.5 times more than historical levels. This could heighten the direct financial impacts to thermal power companies (and that does not include the wider impacts of power shortages to productive activity). Despite the uncertainty in the projections — or indeed, because of it — investors and companies need to start planning now.

What Investors, Regulators, and Companies Can Do

Investors can incorporate drought indexes — which can be constructed for future time periods using climate model outputs — in forward-looking scenario analysis. Given uncertain projections, it is vital that investors stress-test their energy portfolios to ensure they are resilient to a wide range of future scenarios.  Investors should also engage directly with companies, including by asking thermal power companies about the water withdrawal intensities and cooling technologies of their power plants. They can also ask for records on water shortage-induced generation reductions and outages, water management policies and drought contingency plans.

Power-industry and financial regulators should require the disclosure of climate-related risks. For example, electricity regulators could require power companies to report on outages and their causes. We found these types of data are not available in many countries outside India.

The TCFD should provide more detailed disclosure guidance for the energy sector (and potentially other water-intensive sectors, as relevant) to help companies disclose more useful information as mentioned above.