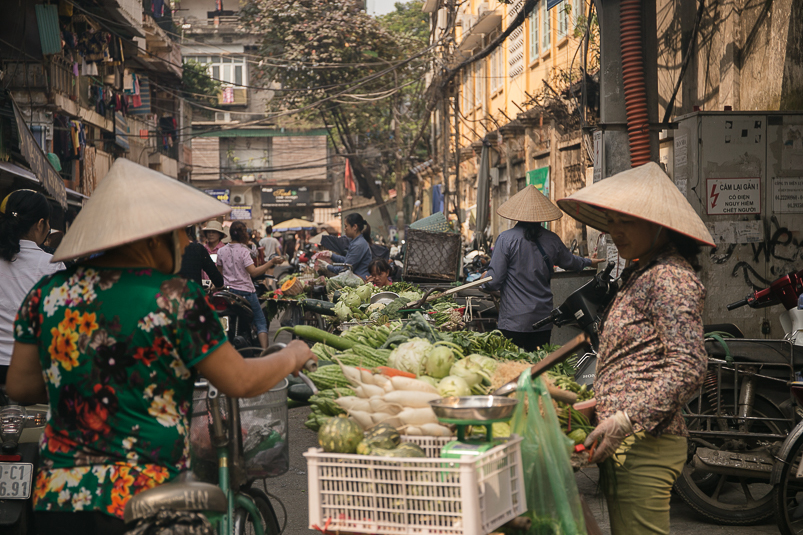 Vietnamese women at a wet market in Hanoi. Photo by VnExpress/Valentina Aru

An ‘other’ reflects on the ways in which he and many others feel they belong, why Vietnam is home.

I have spent over 40 percent of my adult life outside of my home country, never content with having my soul controlled by geography, to paraphrase George Santayana. I carry a U.S. passport but it doesn’t define me. I am a U.S. ex-patriot and global citizen who calls Vietnam home.

It was during my first visit to Hanoi 23 years ago this month that this country – with its tragic yet inspirational millennia-long history – cast its spell on me.  After moving here in 2005, I joined a select group of expats – an estimated 100,000 of them, according to official sources – who live in the midst of 97 million Vietnamese.

Love us, love us not

As a foreigner, I am one of those strange creatures from a distant planet, walking enigmas who evoke a panoply of emotions, ranging from interest and curiosity to indifference, contempt, and fear. As outsiders, we are sources of income, role models, fonts of wisdom, bearers of all things good, easy marks, and importers of evil trends and tendencies.

Our “beauty” lies in the eyes of the beholder: multifaceted and, at times, schizophrenic. Sometimes, they love us, sometimes they love us not, often with good reason, based on past experience or collective memory.

Why have so many foreigners – tourists, travelers and expats alike – flocked to Vietnam in recent years? In abridged alphabetical order: adventure, business, charity, cultural heritage, curiosity, development, forgiveness, love, penance, profit, reconciliation, religion, scholarship, sex, and study. Some of us come here to take, others to give (back), still others to experience the dawn of a new age in a country that is making up for lost time in stunning fashion.

Greig Craft, a U.S. social entrepreneur who first came to Vietnam in 1989, set up the Asia Injury Prevention (AIP) Foundation to combat the public health crisis arising from motorbike use without a helmet. In the spirit of doing good and doing well, Craft echoes the views of other expats in Vietnam, when he speaks of the obligation to “not only plant the seeds of prosperity for developing countries like Vietnam, but to also balance it with social initiatives and programs to improve the lives of the people.”

Lady Borton is a Hanoi resident and arguably the most legendary U.S. expat living and working in Vietnam.  During the war, she administered a Quaker Service project that treated civilian amputees in Quang Ngai, a heavily-contested province in the former South Vietnam. She also worked in the North on war-relief projects. In addition, Lady Borton is among a handful of US Americans who worked with post-war Vietnam during what she calls the “Hard Times” of a debilitating post-war U.S.-led embargo.

Fluent in Vietnamese, Lady Borton has collected stories over the past half-century from countless Vietnamese from all walks of life. “I am constantly surprised,” she says. “I hear a story and realize, ‘Oh! Their situation was not what I thought. And not what we Americans thought or think we know.'”

Among those who have come to Vietnam for one or more of the aforementioned reasons are thousands of overseas Vietnamese. Hao Tran, a HCMC-based Vietnamese-American entrepreneur who runs a media company, Vietcetera.com, and invests in food and beverage businesses, credits his time here with helping him discover “the better part of my Vietnamese identity. I previously wasn’t very proud to be Vietnamese.”

Not cut from the same cloth

I am aware, sometimes painfully so, of those who have come before me, which has helped me become more closely attuned to the Vietnamese perspective. For centuries, foreigners, mainly people who look like me (i.e., white and male), have come to Vietnam in the name of God, Civilization, Country, Ideology, and Profit. While a few have streets named after them (e.g., Pasteur, de Rhodes, Yersin and Morrison*) because of their landmark contributions to Vietnam and the world, many exploited, violated and murdered. Both their demise and their departure were cause for rejoicing.

While I live among the Vietnamese, most expats live a ghettoized and insular existence that tells a tale of two worlds. They watch the “locals” as if in a movie or a museum, barely scratching the cultural surface. Many complain incessantly about why “they” are not more like “us.” They offer unrelenting and unsolicited advice about what Viet Nam could and should be doing. or doing better. They come and go like clockwork; precious few are here for the long haul.

US Americans:  similar but different

I am an expat but also a U.S. American, which places me in a special category. Contrary to what my fellow citizens are told (i.e., the official line is that all Vietnamese are forward-looking, the past is past), or like to believe, because it assuages their guilt, there are Vietnamese who are either suspicious of us or do not like us. Can you blame them?

The U.S. military, in what is logically known here as the American War, since it was the U.S. and its allies waging war on Vietnamese soil, after all, turned large areas of Vietnam into killing zones, dropping million tons of munitions on a country half the size of Texas, in line with General Curtis LeMay’s infamous quote that “we’re going to bomb them back into the Stone Age.” An estimated 3.8 million people were killed, more than half of them civilians, in a war in which body count was deemed a metric for progress.

The U.S. also wrought massive environmental destruction and spawned horrific war legacies such as Agent Orange (AO) and Unexploded Ordnance (UXO) that continue to maim, deform and kill, over four decades after the bombs stopped falling and the guns fell silent.

Some U.S. Americans, including veterans, have come back to help deal with these war legacies, and stayed longer than they expected.  Much longer, in some cases. My friend, Chuck Searcy, a U.S. Army veteran during the 1968 Tet Offensive in Saigon, came here in 1995 to work with mobility-impaired children for three years.  Over two decades later, he is still here, helping clean up bombs and mines, and assisting families suffering from the consequences of Agent Orange as International Advisor for Project Renew.

“The Vietnamese have never demanded anything of us except peace, friendship, and mutual respect, even after the devastation they suffered during the war,” Searcy says. “They are surprisingly gracious and generous in their appreciation for the small contributions we do make when, actually, we’re only doing what we have a moral obligation to do. I have learned a lot from the Vietnamese about humility and understanding,” he adds.

I often feel like a secular missionary whose interactions with the Vietnamese occasionally break down stereotypes, melt ice, and defy expectations. I am from the USA but am not “American” in many respects because of my extensive international experience and global (i.e., non-U.S.-centric) perspective. Whenever I look in the mirror, I realize I will always be an outsider, but one who is accepted, respected and has found his way.

Vietnam: A nation on the move

It is my privilege to be an eyewitness to history in the making, a participant-observer in an exhilarating and unfolding ethnographic research project. Vietnam will at times bend you, break you and put the pieces back together again, sometimes in the course of a day. Every day whets your appetite for more and heightens anticipation about what the coming weeks and months will bring.

This is a nation on the move, always in motion, rarely taking time to reflect. Life is lived to the fullest, tangible, raw, unprocessed and real. There are times when it seems as if the word serendipity was invented in Vietnam.

In spite of a range of societal problems, many of which are the “growing pains” of a rapidly developing country such as environmental pollution, food hygiene issues, and income/wealth inequality, and some that are the result of forces beyond Vietnam’s control like climate change and global trade wars, as well as perennial concerns about Big Brother to the North, there is a palpable and well-documented sense of optimism and forward momentum.

In recent years, Vietnam has boasted the fastest-growing economy in Southeast Asia and will, I hope and pray, be successful in charting a course for genuinely sustainable development. Life is better, much better, for the vast majority of people.

Most importantly, Vietnam is at peace and belongs to the Vietnamese.

(Author’s note: Norman Morrison, an American Quaker who set himself on fire below Robert McNamara’s Pentagon office in November 1965, is the only U.S. American I know of who has a street named after him in Vietnam.)

*Mark A. Ashwill is an international educator who has lived in Viet Nam since 2005. He served as country director of the Institute of International Education (IIE)-Vietnam from 2005-09 and is the co-founder and managing director of Capstone Vietnam, a full-service educational consulting company with offices in Hanoi and HCMC. The opinions expressed here are his own.