Protests erupted across Vietnam on Sunday against government plans to introduce a concession on new special economic zones (SEZs) that would allow land to be leased to foreign investors for a 99-year periods. END_OF_DOCUMENT_TOKEN_TO_BE_REPLACED

China has warned its citizens in Vietnam after protesters clashed with police over a government plan to create new economic zones for foreign investment that has fuelled anti-Chinese sentiment in the country.

HANOI: China has warned its citizens in Vietnam after protesters clashed with police over a government plan to create new economic zones for foreign investment that has fuelled anti-Chinese sentiment in the country.

More than 100 protesters were arrested and dozens of police injured at a protest in central Vietnam on Sunday, one of several demonstrations nationwide against the special economic zones opponents fear will be dominated by Chinese investors. 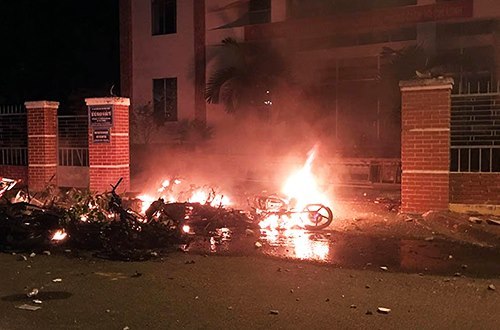 Officers dispersed a rowdy protest in Binh Thuan Province near midnight on Sunday.

Police in Binh Thuan Province announced that they have detained 102 people pending investigation into Sunday’s vandalism at the local government office.

“There were no casualties. But dozens of police officers were injured,” police spokesman Nguyen Van Nhieu said.

Hundreds of protestors had stormed the office of the People’s Committee in Binh Thuan on Sunday, burnt vehicles, destroyed other property and clashed with the police, authorities said.

The situation was resolved near midnight with help from forces from the Ministry of Public Security, Nhieu said.

The vandalizing of the office took place at around 8 p.m., and authorities could only watch helplessly.

Earlier that night, authorities used smoke bombs and firefighting hoses to diffuse the protest after local officials could not convince the crowd to disperse, but such tactics also proved ineffective.

Nguyen Trung Truc, vice chairman of the People’s Committee of Tuy Phong District, said that traffic patrols had to direct vehicles to take detours because Highway 1A had been immobilized from the afternoon. Some of the protestors threw rocks at public vehicles.