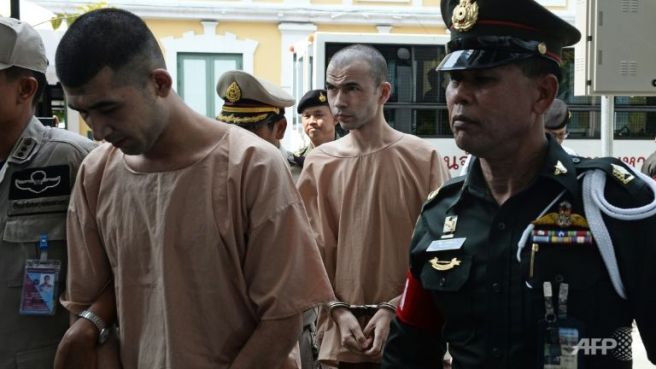 Two Uighur suspects in the 2015 Erawan shrine bombing were arrested by police over August and September 2015. (Photo: AFP)
In December 2015, the elite Indonesian counter-terrorist unit Densus-88 raided a suspected Islamist safe-house in West Java where they arrested 11 militants who were allegedly planning attacks in several cities on the main islands of Java, Sumatra and Kalimantan.

Among those detained was a 35-year-old Uighur identified simply as Alli. According to then chief of police Badrodin Haiti, he had entered the country with two accomplices via the island of Bantam after transiting through Thailand and Singapore and was being groomed as a suicide bomber by a cell of the Mujahidin Indonesia Timur (MIT).

Alli has since been investigated for complicity in the 2015 Erawan Shrine bombing in Bangkok as well as his putative involvement with Bahrun Naim, an Indonesian national who is one of the key leaders of Khatibah Nusantara (KN), a special Malay-speaking umbrella unit with a 100-men set-up within Islamic State in Syria and the Levant (ISIL). Naim is also the alleged mastermind behind the January 2016 attacks in Jakarta that left eight dead and 24 injured.

The bombing of the Erawan Shrine in Bangkok in 2015 killed 20 people and left more than a hundred injured. (Photo: AFP)

The 2015 incident has raised fears that Southeast Asia, which for several years has acted as an important trans-shipment hub for illegal Uighur migration, may now also be metastasising into a new operational theatre for Islamist militants previously based in the Xinjiang Autonomous Region (XAR).

One particular worry is that extremists from this restive area of China’s northwest are moving to exploit refugee and migrant flows as a means of covertly joining up with local militants in the region, similar to the same manner the Islamic State has operated in France and Belgium.

At the forefront of these concerns is MIT, Indonesia’s most active and dangerous terrorist group, which just last year publicly pledged to accept 100 Uighurs into its ranks. While it is true that the group has suffered as a result of an intense crackdown on its activities as well the death of founder and leader Santoso, who was shot and killed by police and military forces during a gunfight in Poso in July 2016, it continues to routinely threaten domestic security and is still thought to have a functioning base in the jungles of central Sulawesi. According to national intelligence officials. MIT retains both a willingness and capacity to absorb foreign fighters.

Uighurs are known to constitute a component of this external network, with security authorities putting the number at around 14 by mid-2016. Although not especially large, these militants have symbolic import, as they are believed to have ideological and at least some nascent operational and personal ties with the Islamic State.

The possibility of this nexus taking on a more practical and concrete dimension could well increase if some of the estimated 3,000 to 4,500 experienced Chinese-Muslims who have volunteered to fight in Syria and Iraq start returning to Asia as a result of territorial setbacks that have increasingly beset the Islamic State in these two theatres.

In 2016, Islamic State leader Abu Bakr al Baghdadi saw nearly a quarter (or 23 per cent) of his self-proclaimed “caliphate” recaptured. Western intelligence analysts have warned that, while welcomed, this reversal in fortune is liable to trigger an exodus of foreign combatants from Middle East, many of whom will likely seek other conflict zones in continuing their violent jihad.

Raqqa, Syria, remains the stronghold of the Islamic State and its de-facto capital. (Photo: Reuters)

Although Uighurs would doubtless aim on returning to XAR, for several reasons, Indonesia could be viewed as a viable alternative option. There are numerous ungoverned spaces scattered across the country, the archipelago’s borders are highly porous and there are several radical entities that have openly pledged an oath of allegiance to al Baghdadi.

Arguably most important, however, are the spreading ties that have developed between Uighurs and Indonesians in KN. Regional commentators believe this umbrella group is already being used as a principal vehicle for transporting Chinese militants back from the Middle East and linking them up with their Islamist brethren in MIT. Naim is thought to be the principal person facilitating these reverse flows, allegedly operating in conjunction with Amin Baco, a Malaysian who is suspected to be al Baghdadi’s key linkman in Southeast Asia.

If in fact KN is being leveraged to entrench an Islamic State-affiliated Uighur presence in this manner, it could have severe ramifications. Within Indonesia, these veterans could help to breathe new life into a weakened MIT and, drawing on the tactics used in Syria and Iraq, disrupt communal relations by spearheading attacks on Shi’a Muslims to incite sectarian hatred.

Regionally, they could work to rekindle Southeast Asian transnational Islamic extremism by conducting cross-border strikes in the same manner as Jemaah Islamiyah (JI) has. Many would remember JI as the group responsible for the worst terrorist attacks to have ever been perpetrated in Southeast Asia, including the 2002 mass suicide bombings in Bali.

SOUTHERN PHILIPPINES AN ATTRACTIVE REAR BASE

While much of the focus has been on Indonesia, there is some speculation that Uighurs may also be looking to establish a logistical presence in Southern Philippines. Concerns in this regard were first aroused in 2014 when five Chinese Muslims traveling on false Turkish passports were arrested in Manila. During their initial interrogation, the group claimed they were political refugees fleeing persecution in XAR.

Subsequent investigations, however, revealed that before arriving in the capital, they had first traveled to Basilan and Cotobato City in Mindanao where intelligence authorities believe they had attempted to make contact with members of the Abu Sayyaf group (ASG) and the Bangsamoro Islamic Freedom Fighters (BIFF) – two active albeit disaggregated rebel organisations that have sworn allegiance to Islamic State.

Since then, there have been several social media postings from young members of the ASG expressing support and solidarity for the plight of Uighurs in Xinjiang. A visual recording of a chant in Mandarin entitled “Mujahid” that was released by the Al Hayat Media Center of the Islamic State in late 2015 has also apparently reached followers of the ASG and BIFF – as well as two smaller movements that have similarly pledged loyalty to al Baghdadi, Ansar Khilafah Philippines (AKP) and Khilafah Islamiyah (KIM). This affinity could be indicative of a nascent extremist ideological cross-pollination that combines the interests and sympathies of Muslim militants in the wider Mindanao Basin with those in China.

Although there is as yet no definitive evidence of such a development, there are at least two facets of southern Philippines that could conceivably make it attractive as a rear base for Uighur rebels operating in Sulawesi.

First, like Indonesia, porous borders, numerous ungoverned spaces, and the presence of active terrorist groups are all characteristic features of the region.

Second, the Rodrigo Duterte administration’s current pre-occupation with the war on drugs has greatly impeded the ability of the police and intelligence services to track the movement of foreigners entering or leaving the southern Philippines, as virtually all resources have now been diverted to the counter-narcotics mission.

The one major challenge confronting Uighurs seeking to independently penetrate Mindanao and integrate with the local population is their distinct ethnic features, which would be sure to stand out.

To be successful another entity would be needed to facilitate their entry and in the south’s current militant context one is of relevance: the ASG, and particularly the Basilan-based faction led by Isnilon Hapilon.

Apart from being far more outward-looking and religiously pious than Radullan Sahiron – the commander of the group’s Sulu-based branch – Hapilon was appointed Islamic State’s Southeast Asian emir in 2016, which has greatly elevated his stature as an Islamist “magnet” for attracting outside jihadists. As one former member of the ASG summed up: “If there is going to be a Uighur connection with the Philippines it will be (established) to access camps in Mindanao and it will be forged through the Basilan-based faction of Hapilon.”

Any Uighur presence in Mindanao would have direct relevance for militant activity in Indonesia as it could avail jihadists fighting in Sulawesi – local and foreign – with an important rear base for the triple purposes of refuge, training and arms procurement. And President Duterte’s prioritization of the war on drugs has significantly elevated this potential threat.

Peter Chalk is an independent security consultant based in the United States. He is the Associate Editor of Studies in Conflict and Terrorism, one of the foremost journals in the international security field, and acts as a subject matter expert for several organizations that provide professional executive education to military and government officials around the world. He is also author of numerous publications and books on various aspects of low intensity conflict in the contemporary world.