Two years ago, some European and US experts gathered to discuss China in an elegant English country house. The setting was seductive, but the mood was dark. Two years into Xi Jinping’s presidency, China’s politics were turning away from the liberalising trend of the previous three decades, towards a hard-edged nationalism that was discomfiting China’s immediate neighbours and their western allies.

China was getting more powerful but less friendly, squeezing foreign competition out of its internal markets, throwing its weight around the South China Sea, crushing internal dissent and enforcing loyalty to the regime.

The mostly liberal-minded scholars had assumed that the spectacular success of China’s economic opening and partial political relaxation would lead to a more open society, greater rule of law and more political inclusion. They were dismayed to discover that Xi’s mission was not to steer China towards political pluralism and tolerance, but to shore up the Communist party, in defiance of what the scholars had assumed was an inevitable trend: that an emerging middle class would always force a political opening.

If that was not going to happen, given China’s vastly increased influence in the world, a global conflict between the systems, values and norms of the pluralist, democratic United States and China’s Communist party seemed inevitable. It would be unpleasant, but nobody doubted that US values would prevail.

The group discussed whether China could succeed. What might go wrong? Would China reset the world’s economic and security arrangements in its favour? What could the US do to defend its norms and values beyond concluding the Trans Pacific Partnership (TPP), the huge US-led Pacific trade initiative, and shoring up political security guarantees to its close regional allies, Japan, South Korea and Vietnam, to limit the growth of China’s influence? 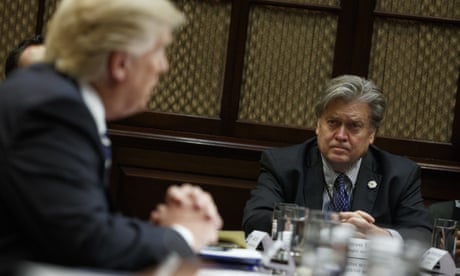 Steve Bannon: ‘We’re going to war in the South China Sea … no doubt’

The one scenario not discussed was that the US would tear up its own rules, leaving the field open to China to consolidate its dominance of the Asia Pacific and extend its global influence. Nobody even imagined such a far-fetched possibility. Donald Trump’s actions seem to have surprised Beijing as much as they have dismayed America’s allies. Now the challenge for China is how to reap the benefits and contain the inevitable damage.

In terms of international diplomacy, things are going well. It’s hard to imagine Trump quoting Thucydides, or Stephen Hawkins or Herman Hesse, or cramming references to Pandora’s box, the Peace of Westphalia and the sword of Damocles into a 58-minute plea for peace and international cooperation. Such a carefully crafted speech might have been delivered by previous US presidents, since it paid fulsome homage to the core values the US has promoted since 1945. But this was delivered by the general secretary of the Chinese Communist party and president of the China, to an audience at the United Nations in Geneva in January. China’s proposition to the world, Xi said, was to “build a community of shared future for mankind and achieve shared and win-win development”.

Such a claim might previously have encountered polite scepticism. Today, it receives an almost uncritical welcome.

Trump has charged China with “raping” the US, a word he might have avoided for other reasons. Xi reminded his audience of China’s contribution to global economic stability since the financial crisis, of an average of 30% of global growth each year. “In the coming five years,” he predicted, “China will import $8tn of goods, attract $600bn of foreign investment, make $750bn of outbound investment, and Chinese tourists will make 700 million outbound visits.”

Xi’s commitment to global capitalism is convincing, given China’s dependence on exports. More audacious was his contention that “we always put people’s rights and interests above everything else and have worked hard to advance and uphold human rights”. Human rights organisations were excluded from the occasion.

But if Xi’s claim is contestable, it pales in comparison with the exaggerations, false claims and threats by Trump and his circle.

There will be few winners in a world of escalating tensions and disruption. China would not have picked this moment for a fight with the US. But if it can consolidate its own economic arrangements in the region and beyond, using its economic muscle to its diplomatic and political advantage while escaping the burden of censure that its internal repression has provoked to date, it will be a huge win for China.

Trump’s singular achievement in his short time as president has been to trash US soft power assets and make China’s regime look less objectionable. Before Trump, even as western countries scrambled to access the Chinese market, they regarded Beijing with scepticism. Why should anyone believe the global message of a regime that does not tolerate dissent or domestic challenges?

But that is now a question we must begin to ask of the US. China’s official untruths seem modest in comparison with those of a man who can barely get through a sentence without a lie. For Beijing, the question now is how far an attempt to replace US influence is possible or desirable. For US allies, the question is how far should we wish Beijing success?