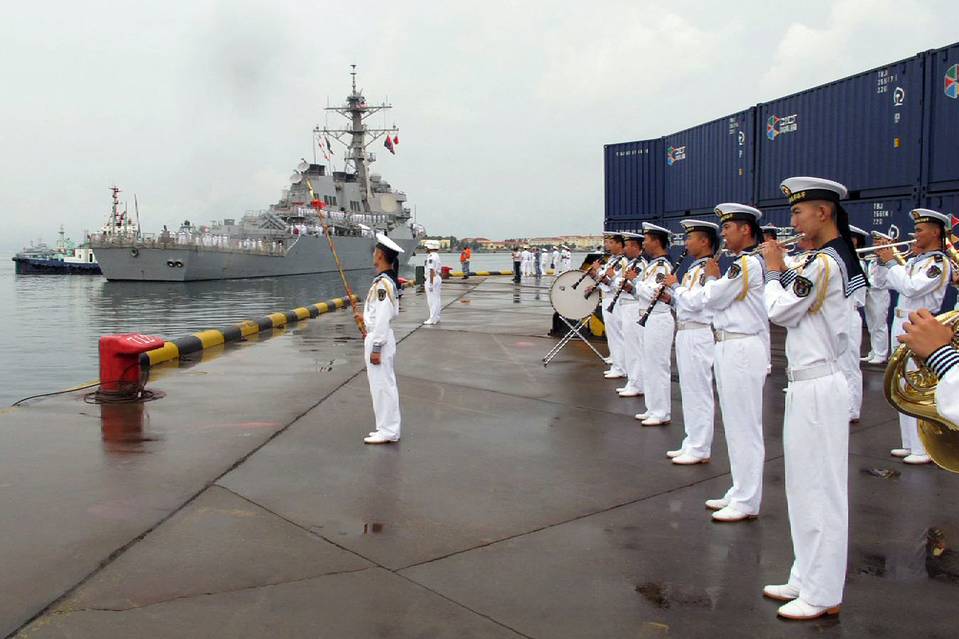 A recent think-tank report says that America must “expand communications with China in times of peace, crisis, and war.” Above, a Chinese military band plays as a U.S. destroyer arrives on Aug. 8 at the port of Qingdao, in eastern China, on a scheduled visit. Photo: Associated Press

SHANGHAI—The last time America and China went to war—in Korea in 1950—they fought each other to a standstill.

Later that decade, as the Cold War ramped up, they came close to blows again; the Eisenhower administration repeatedly threatened “Red China” with nuclear devastation as tensions bubbled over Taiwan. END_OF_DOCUMENT_TOKEN_TO_BE_REPLACED

Indonesia will prioritise development in its outer regions in a bid to “secure sovereignty” over the archipelago’s vast waters, as tensions continue in the South China Sea.

In the annual state address to parliament on Tuesday, President Joko Widodo, commonly referred to as Jokowi, covered a range of topics from the country’s ongoing battle with addressing poverty to terrorism and security.

Among the issues that gained applause were efforts to secure the nation’s sovereignty. END_OF_DOCUMENT_TOKEN_TO_BE_REPLACED

While the aftershocks of an international arbitration ruling against its South China Sea territorial claims are still being felt across East Asia, Beijing must now grapple with the prospect of an apparent “trilateralization” of defense mechanisms between Washington, Tokyo and Seoul in the region. Moscow finds itself in a more delicate position than Beijing since US anti-missile network covers its western and eastern territories.
China and Russia find themselves in the same boat while opposing the United States’ recent efforts to advance its missile defense complex along both flanks of Eurasia. Some already envisage a possible cooperation between Beijing and Moscow to counter what many Russian analysts have dubbed Washington’s “double containment” from the Euro-Russian border to the East China Sea.

However, as it is hard not to see a single thread connecting the US and US-related defense shields in the Western Pacific and Eastern Europe, in particular regarding their industrial development, it is not a foregone conclusion that the Chinese communist leadership and the Kremlin will manage to coordinate a common response to Washington’s anti-missile challenge. END_OF_DOCUMENT_TOKEN_TO_BE_REPLACED

Lawyers are public speakers. This article includes some new rules on public speaking. No fig leaves gentlemen, and ladies too.

Aug. 17, 2016 – As a lawyer, your words matter. From the courtroom to the boardroom, from conferences to cocktail parties, words tell a story about you, and potential clients want to know your story. Are you credible? Are you a power player? Are you a leader? END_OF_DOCUMENT_TOKEN_TO_BE_REPLACED

Hanoi’s streets (in 2007, above) are now full of motorcycles and scooters, and shop shelves are no longer bare. Photograph by Chau Doan/Getty Images

harvardmagazine – A RECENT Monday morning, during a class on global trade, the professor reviewed the effects of nations’ limits on such commerce: tariffs, quotas, and the “voluntary” restraints exporting countries impose on their shipments to eager customers (lest protected interests in the importing area wilt). His students, arrayed in a teaching amphitheater laid out like the classrooms at Harvard Business School (HBS)—complete with laminated placards bearing each END_OF_DOCUMENT_TOKEN_TO_BE_REPLACED

English: The job for life model is dead. Here’s what millennials need to know