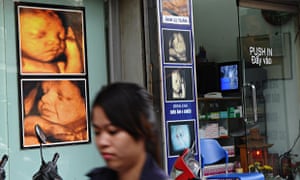 On a Saturday morning, about 100 people gather for mass at Thai Ha church in Hanoi. During the sermon, the priest talks about the dangers of sex before marriage and the sin of killing an unborn child. Behind the pews, on a table, sits a small coffin containing foetuses and stillborn babies collected by volunteers over the week from private clinics. Today there are 13 in the box.

“Sometimes we collect over 100,” says Tran Thi Huong, a woman in her 50s, who is among a small but growing group of anti-abortion activists in north Vietnam. Huong says more young people are having premarital sex and that the prevalence of abortion in Vietnamese society encourages women to do it freely. “The education system for the last 60 years has taught people that abortion is normal,” she says.

The activists hand out leaflets at student residences warning young people about having sex before marriage. They provide a phone number and offer “consultation” services for women seeking abortions.

The phone number belongs to 45-year-old Maria Nguyet Thi Huyen. “We teach people not to have sex before marriage,” she says. “We try to advise young people the true value of love. If they are already having sex, we tell them to be responsible, to protect life and build a family.”

Her advice includes having sex on “safe” days and other methods prescribed by the Catholic church. They also offer a place at a mo nha (open house) where the mother will be looked after until her baby is born.

Vietnam has a high abortion rate, although exact figures are difficult to obtain because many procedures take place at private clinics, from which official data is not collected.

A survey by the Population Council in 2012 of 901 women in Thai Binh province said 43% of respondents had had at least one pregnancy terminated; a third had two or more.

The high abortion rates have been attributed to a preference for sons, and to not using contraception. However, Huong says abortion has also been “promoted” by the government as a form of contraception because of its widespread availability and as a result of its two-child policy.

In the 1980s, the government encouraged small families, ideally with two children, which meant some state workers and members of the Communist party could risk losing their positions if they had more than two.

Ton Van der Velden has worked in sexual and reproductive health in Vietnam for nearly 10 years, and is now country director of Medical Committee Netherlands-Vietnam.

He says education is a problem, but argues for a different approach. Church activists want educators to teach abstinence, but Van der Velden says educators should say: if you have sex, use proper contraception. “Education is too limited to the biological, and abstinence is still strongly promoted,” he says. Vietnamese society is a very conservative, he says, adding: “School is a public place and people don’t want to state those subjects publicly.”

Trang*, 32, from Hanoi, had an abortion 10 years ago. “When I was in the ninth grade in school, we should have been taught about this but all we were told is that a baby is made when the sperm and the egg meet together – we weren’t told how they met.”

However, by the time she was in a sexual relationship, she knew about contraceptives from a book that her mother had surreptitiously left in a bookcase. She became pregnant despite taking a morning-after pill. “I discovered I was pregnant one month before our wedding,” she says. “I wanted to have an abortion because I didn’t want people asking questions when the baby was born. Also, I had taken some antibiotics and I was worried about the baby’s health.”

Despite conservative attitudes at school, awareness of contraception is high. According to a survey conducted by the Vietnamese government, the World Health Organisation and the the UN Children’s Fund (Unicef) in 2010, more than 90% of respondents knew about contraception. Yet the high abortion rate persists.

Van der Velden says there are several reasons for this. Social stigma can make it difficult for young people to buy contraceptives, and discussing contraception is difficult between couples. Rumours about the health risks of contraceptives are also to blame.

Abortion may be common – Trang says only one of her friends has not had a termination – but the emotional burden is not adequately addressed. Trang says she was offered no advice before the procedure. She wore her wedding ring at the health clinic so she could “avoid questions”, but that didn’t stop the doctor from expressing her disdain. “I don’t think the doctor gave me any painkillers, it was so painful. But when I cried out, she told me I had done something bad and I should pay the consequences. She said I would not be able to have a child after that and I was so worried.”

Linh* had an abortion when she was 26 at a private hospital in Hanoi. “The staff didn’t tell me anything. They pinned the photo of the ultrasound on my hospital gown and I had to walk through the hospital with it there like a badge or something. I was really upset,” she says.

Anti-abortion activists argue that they are providing help and advice to women who would otherwise be left on their own. But Van der Velden argues that support is available from medical professionals. “If you go to any hospital and say ‘I’m pregnant but I’m not sure and I’d like to talk about it’, that service is there,” he says. “But the problem is that young people don’t know that service is there. Government agencies don’t reach out in that way.”

Linh says she is glad she was not approached by church activists. “If someone told me I was committing a sin or something, it would not have helped me at all,” she says. “I just wanted support before and after the abortion, not someone blaming me.”

• Names have been changed to protect people