China has said it will not accept a ruling against it in a key international legal case over strategic reefs and atolls that Beijing claims would give it control over disputed waters of the South China Sea.

The judgment by an international tribunal in The Hague came down overwhelmingly in favour of claims by the Philippines and is likely to increase global diplomatic pressure on Beijing to scale back military expansion in the area. By depriving certain outcrops of territorial-generating status, the ruling from the permanent court of arbitration effectively punches holes in China’s all-encompassing “nine-dash” line that stretches deep into the South China Sea.

The Chinese president, Xi Jinping, said China’s “territorial sovereignty and marine rights” in the seas would not be affected by the ruling, which declared large areas of the sea to be neutral international waters or the exclusive economic zones of other countries. He insisted China was still “committed to resolving disputes” with its neighbours.

Chinese state media reacted angrily to the verdict. Xinhua, the country’s official news agency, hit out at what it described as an “ill-founded” ruling that was “naturally null and void”. The Communist party mouthpiece newspaper the People’s Daily said in an editorial that the tribunal had ignored “basic truths” and “trampled” on international laws and norms.

“The Chinese government and the Chinese people firmly oppose [the ruling] and will neither acknowledge it nor accept it,” it added.

The Philippine foreign affairs secretary, Perfecto Yasay Jr, said the country welcomed the ruling and called for “restraint and sobriety”. The US State Department called on both parties to comply with their obligations, according to a statement from spokesman John Kirby.

The ruling makes grim reading for Beijing and contains a series of criticisms of China’s actions and claims. The tribunal declared that “although Chinese navigators and fishermen, as well as those of other states, had historically made use of the islands in the South China Sea, there was no evidence that China had historically exercised exclusive control over the waters or their resources.

“The tribunal concluded that there was no legal basis for China to claim historic rights to resources within the sea areas falling within the ‘nine-dash line’.”

None of the fiercely disputed Spratly Islands, the UN body found, were “capable of generating extended maritime zones … [and] having found that none of the features claimed by China was capable of generating an exclusive economic zone, the tribunal found that it could — without delimiting a boundary — declare that certain sea areas are within the exclusive economic zone of the Philippines, because those areas are not overlapped by any possible entitlement of China.”

The tribunal found that China had violated the Philippines’ sovereign rights in its exclusive economic zone by interfering with Philippine fishing and petroleum exploration, constructing artificial islands and failing to prevent Chinese fishermen from fishing in the zone. At Scarborough Shoal, where it said fishermen from the Philippines and China had traditional fishing rights, it said China had restricted these rights. It added that China had created a serious risk of collision when its patrol boats had physically obstructed Philippine fishing vessels.

Analysis South China Sea dispute: what you need to know about The Hague court ruling

Beijing asserts sweeping ownership in these contested waters. Now an international tribunal has ruled in favour of the Philippines in case over territorial control
Read more

The tribunal also condemned China’s land reclamation projects and its construction of artificial islands at seven features in the Spratly Islands, concluding that it had caused “severe harm to the coral reef environment and violated its obligation to preserve and protect fragile ecosystems and the habitat of depleted, threatened, or endangered species”.

Land reclamation “was incompatible with the obligations on a state during dispute resolution proceedings”, it added, since it involved causing “irreparable harm to the marine environment”, building a “large artificial island in the Philippines’ exclusive economic zone”, and destroying “evidence of the natural condition of features in the South China Sea that formed part of the parties’ dispute”.

Paul Reichler, of the law firm Foley Hoag LLP, who who coordinated the Philippines’ legal team, said: “The tribunal’s ruling not only benefits the Philippines, it also benefits other states bordering the South China Sea like Indonesia, Malaysia and Vietnam. If China’s nine-dash line is invalid as to the Philippines, it is equally invalid to those states and, indeed, the rest of the international community.”

Beijing claims 90% of the South China Sea, a maritime region believed to hold a wealth of untapped oil and gas reserves and through which roughly $4.5tn of ship-borne trade passes every year. Vietnam, Malaysia, Brunei and Taiwan also contest China’s claims to islands and reef systems closer to their territory than Beijing’s.

China says it follows a historical precedent set by the “nine-dash line” that Beijing drew in 1947 following the surrender of Japan. The line has been included in subsequent maps issued under Communist rule.

Sporadic violence between Chinese vessels and those of south-east Asia militaries have broken out in recent decades and the verdict, the first international legal decision on the issue, could have unpredictable consequences.

Ashley Townshend, a scholar at the University of Sydney’s United States Studies Centre, said the tribunal’s decision to disqualify China’s “nine-dash” claim on the basis of historic rights was “a huge setback for Beijing”. China had stirred up so much nationalism over the South China Sea issue that it would now have to respond in some way. 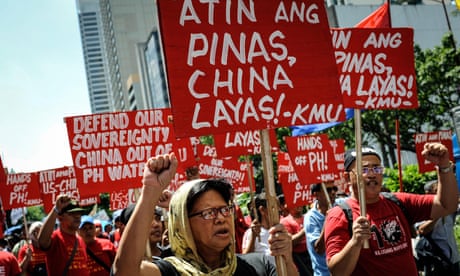 ‘We won’t have to live in fear anymore’: readers on the South China Sea ruling

“In terms of China’s domestic politics [the ruling] is unacceptable to the regime and unfortunately the regime will perceive that the Chinese people view that as unacceptable,” Townshend predicted.

“So there will be huge pressures on Beijing to respond, to save face, to demonstrate with more than just words that it doesn’t abide by and doesn’t credit the ruling with any legal validity and will not adhere to it and will defend its ‘sovereign space’ in the South China Sea.”

Townshend said he did not expect Beijing to lash out militarily but believed further military drills in the South China Sea were possible as well as the establishment of an air defence identification zone somewhere over the region.

Xu Liping, a pro-Beijing scholar from China’s National Institute of International Strategy, told the Guardian he believed the ruling was “biased and unfair”, “absolutely terrible” and “a joke”.

The nationalistic Global Times tabloid attacked the ruling in an English language editorial on Tuesday night as “more radical and shameless than many people had ever expected”, saying it had “brazenly violated China’s territorial sovereignty and maritime rights.”

The newspaper, which is controlled by the Communist party and sometimes reflects its thinking, also warned of a military escalation. “If the US and Japan use [the ruling] to pile military and political pressure on Beijing, Chinese people will firmly support our government to launch a tit-for-tat counterpunch,” it said. “We trust Chinese law enforcement and military forces have been well-prepared.”

The case at the permanent court of arbitration in The Hague, the UN-appointed tribunal that adjudicates in international disputes over maritime territory, has been running since 2013. Philippe Sands QC, who represented the Philippines in the hearing, said: “This is the most significant international legal case for almost the past 20 years since the Pinochet judgment.”

The judgment does not allocate any of the outcrops or islands to rival countries but instead indicates which maritime features are capable under international law of generating territorial rights over surrounding seas.

Last year, US officials claimed the Chinese had built up an extra 800 hectares (2,000 acres) on their occupied outposts across the South China Sea over the previous 18 months. The main focus of activity has been on Mischief Reef, where satellite images reveal the island is growing bigger, and is surrounded by fleets of dredgers and tankers.

China has previously stated that it “will neither accept nor participate in the arbitration unilaterally initiated by the Philippines”. The tribunal ruled, however, that China’s refusal to participate did not deprive the court of jurisdiction.