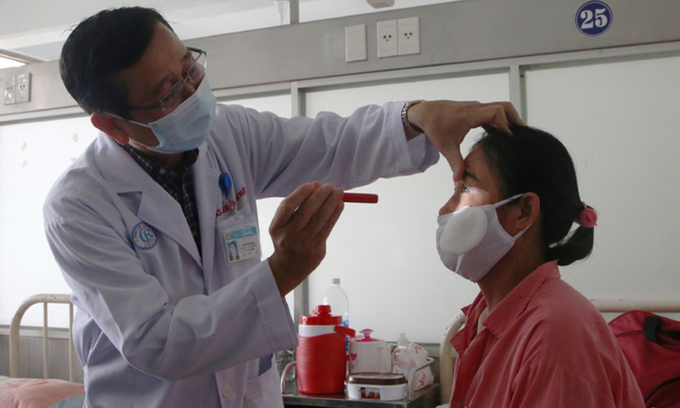 A doctor checks the eyes of a 53-year-old woman in Vietnam after she received corneas from a brain-dead man at a hospital in HCMC. Photo by VnExpress/Thu AnhThe number of people registered to donate organs after brainstem death has kept increasing over the years to almost 50,000.

When the Vietnam National Coordinating Center for Human Organ Transplantation was established in 2014, it received just 200 registrations, most including center officials and staff while the rest comprised medical workers.

In the past, Vietnamese were not willing to share parts of their bodies as many believed one should die wholly to prepare for the afterlife, said Center Director Dong Van He at its meeting in Hanoi on Monday.

However, in recent years, many “touching” stories about donations following brainstem death have inspired people to change their views about dying, he said.

Donors on the list come from all walks of life and are of various ages. Many are members of one family.

He said 95% of organ transplants in Vietnam have a living person as donors and just 5% get organs from a deceased person, which goes completely against the global trend.

Vietnam now has around 300 hospitals that treat patients with traumatic brain injuries and if each of those facilities can persuade one patient to donate one organ, there would be 300 more donors per year on average.

Since the first organ transplant in 1992, Vietnam has carried out 6,500 more such operations.