Vietnam has grabbed international headlines over the past week for the country’s quick and transparent actions to contain the spread of the novel coronavirus disease (COVID-19) outbreak.
VNA Tuesday, March 24, 2020 11:18 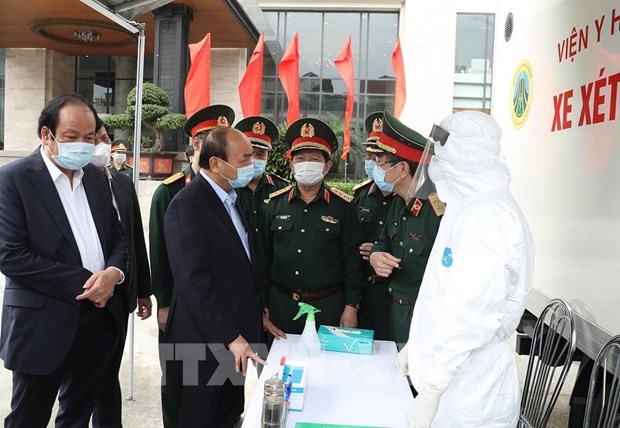 Hanoi (VNA) – Vietnam has grabbed international headlines over the past week for the country’s quick and transparent actions to contain the spread of the novel coronavirus disease (COVID-19) outbreak.

The Communist Party of Vietnam has earned local and foreign plaudits for its firm COVID-19 containment measures, according to an Asia Times story written by columnist David Hutt.

The party has won hearts and minds by touting its quick, effective and transparent management of the viral outbreak, the story said.

“While Vietnam’s confirmed cases have risen in recent days, mostly due to tourists arriving from Europe, the new epicenter of the global pandemic, Hanoi’s strict containment measures have conveyed a bunker spirit that has arguably united the communist-run country.”

The Asia Times quoted Carl Thayer, a Vietnam expert and emeritus professor at the University of New South Wales in Australia, as saying Vietnamese Prime Minister Nguyen Xuan Phuc “has been proactive in taking action.”

“He has established a task force to oversee national, provincial and local levels. The government has gone into overdrive with an information campaign to advise citizens what actions they should take to retard the spread of the virus,” Thayer said.

He added that the military, which enjoys huge respect and trust in Vietnamese society, has been mobilized to assist with public health measures through medical specialists and the provision of quarantine facilities.

The Ministry of Health has been active in announcing new infections and providing sanitation guidance, Michael Tatarski, a journalist based in Ho Chi Minh City, told Asia Times.

The global health community agrees with Vietnam’s measures, said Kidong Park, the Hanoi-based representative of the World Health Organization (WHO), who has praised the Vietnamese government for its “proactiveness and consistency throughout the response.”

Meanwhile, the Diplomat has hailed Vietnamese authorities for remaining transparent about the disease information as well as allowing unrestricted information on Facebook.

“In fighting the epidemic, the government put the existence and life of the people first and foremost. In that spirit, the government has been remarkably transparent, briskly addressing the psychological crisis among the people,” the Washington-based magazine said.

Many foreign news outlets have reported on Vietnam’s preventive measures against the COVID-19 spread, which include suspension of visa-free access for foreigners and closures of schools, cinemas, bars and clubs, massage and karaoke parlours and gaming centres in major cities until the end of March.

The New York-based Bloomberg last week reported that Vietnam’s military was expanding its quarantine capacity to house thousands of Vietnamese returnees from abroad with facilities able to accommodate about 60,000 people./.