Human activity has made an ocean circulation pattern misbehave—triggering a weird confluence of events that has caused the infestations.

Desert locusts have swarmed into Kenya by the hundreds of millions from Somalia and Ethiopia, where such numbers haven’t been seen in a quarter-century. The insects are decimating farmland, threatening an already vulnerable region.

East Africa is in the midst of a crisis that sounds like something out of the Book of Exodus: A plague of locusts is spreading across the region, threatening the food supply of tens of millions. City-sized swarms of the dreaded pests are wreaking havoc as they descend on crops and pasturelands, devouring everything in a matter of hours. The scale of the locust outbreak, which now affects seven East African countries, is like nothing in recent memory.

The insects behind the mayhem are desert locusts, which, despite their name, thrive following periods of heavy rainfall that trigger blooms of vegetation across their normally arid habitats in Africa and the Middle East. Experts say a prolonged bout of exceptionally wet weather, including several rare cyclones that struck eastern Africa and the Arabian Peninsula over the last 18 months, are the primary culprit. The recent storminess, in turn, is related to the the Indian Ocean Dipole, an ocean temperature gradient that was recently extremely pronounced, something that’s also been linked to the devastating bushfires in eastern Australia. 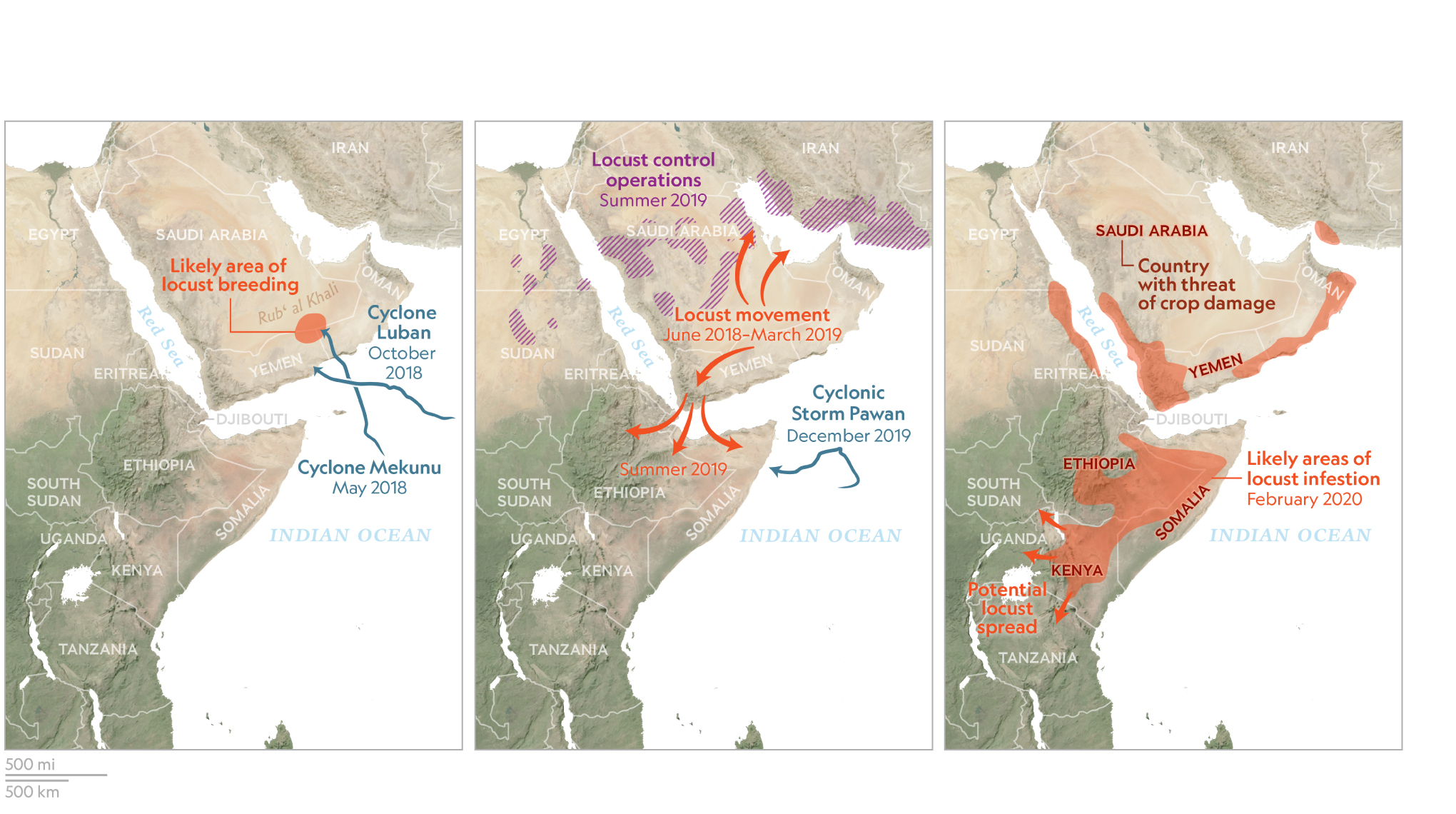 February 2020: Locust swarms threaten to damage the crops of five countries in the region.

Kenya and Ethiopia are experiencing their worst infestation in decades. Locusts are now spreading into Uganda and Tanzania.

Large-scale control operations use pesticides to combat locusts but these efforts were not possible in Yemen and Somalia. Locust breeding continues.

Unfortunately, some experts say it may be a harbinger of things to come as rising sea surface temperatures supercharge storms and climate change tips the scales in favor of circulation patterns like the one that set the stage for this year’s trans-oceanic disasters.

“If we see this continued increase in the frequency of cyclones,” says Keith Cressman, senior locust forecasting officer with the Food and Agriculture Organization, “I think we can assume there will be more locust outbreaks and upsurges in the Horn of Africa.”

According to Cressman, the desert locust crisis traces back to May 2018, when Cyclone Mekunu passed over a vast, unpopulated desert on the southern Arabian Peninsula known as the Empty Quarter, filling the space between sand dunes with ephemeral lakes. Because desert locusts breed and reproduce freely in the area, this likely gave rise to the initial wave. Then, in October, Cyclone Luban spawned in the central Arabian Sea, marched westward, and rained out over the same region near the border of Yemen and Oman.

Desert locusts live for about three months. After a generation matures, the adults lay their eggs which, under the right conditions, can hatch to form a new generation up to 20 times larger than the previous one. In this way, desert locusts can increase their population size exponentially over successive generations, Cressman says. Ultimately, these two 2018 cyclones enabled three generations of wildly successful locust breeding in just nine months, increasing the number of insects buzzing over the Arabian desert roughly 8,000-fold.

Then the locusts started to migrate. By the summer of 2019, swarms were leapfrogging over the Red Sea and the Gulf of Aden into Ethiopia and Somalia, where they enjoyed another bout of successful breeding in subsequent months, Cressman says. This might have been as far as the locusts got were it not for the fact that last October, East Africa experienced unusually widespread and intense autumn rains, which were capped in December by a rare late season cyclone that made landfall in Somalia. These events triggered yet another reproductive spasm.

As the locusts continue to multiply, they’re invading new areas. By late December, the first swarms were starting to arrive in Kenya, moving quickly throughout the country’s northern and central areas; by January, the country was experiencing its worst infestation in 70 years. Djibouti and Eritrea also started developing locust infestations, and on February 9, swarms of the insects started arriving in northeast Uganda and northern Tanzania.

Bracing for the worst

The worst of the outbreak may be yet to come. The fall rains, Cressman says, “tipped the situation into something not only very usual but very dangerous” by effectively enabling at least another two generations of locust breeding.

By June, he fears the desert locusts will have increased their numbers 400-fold compared with today, triggering widespread devastation to crops and pastures in a region that’s already extremely vulnerable to famine. Over 13 million people in Djibouti, Eritrea, Ethiopia, Kenya, and Somalia experience “severe acute food insecurity,” according to the FAO, while another 20 million are on the brink.

“It’s all about timing,” Cressman says, explaining that most crops are planted at the beginning of East Africa’s first rainy season, in March or April. “When that rainy season starts and farmers are ready to plant, that will coincide with this new generation of swarms.”

A confluence of unusual weather and climate conditions have helped stoked the outbreak.

Each of the 2018 cyclones that fueled locust breeding in the Arabian Peninsula was unusual. As NASA notes, the Arabian Sea can go years without a single cyclone forming. But while 2018 was a fairly stormy year, 2019 was extreme, with the North Indian Ocean shattering many records, including most hurricane days and most “accumulated cyclone energy,” a measure of the season’s destructive power. The rare December storm was but one symptom.

Throughout the fall of 2018, the Indian Ocean Dipole was positive. It then dipped slightly negative for a few months before roaring with a vengeance, rising to its second most positive state since 1870 by last fall, according to Wenju Cai, a climate scientist at the Australian national science agency CSIRO. The conditions that both East Africa and Australia have experienced of late are exactly what we’d expect as a result.

“The hyperactive cyclone season that brought heavy rain to the Arabian Peninsula was driven by a strong positive phase of the Indian Ocean Dipole–the same pattern that stoked record drought in Australia,” says Bob Henson, a meteorologist at Weather Underground.

Whether that will lead to more plagues of locusts is an open question, but it’s a worrying possibility. Ocean circulation patterns aside, climate change is warming the oceans everywhere, which is expected to trigger more intense downpours. In the Arabian Sea, recent research suggests global warming is already making fall cyclones more intense. At the same time, other research has tied climate change to worsening droughts and failing rains across East Africa, painting a picture of an uncertain future, but one that’s almost certainly more dangerous.

While scientists continue to explore where East Africa’s climate is headed, aid organizations are scrambling to prevent the locust crisis from getting worse. Last month, the FAO called on the international community to pony up $76 million for pest control operations and to protect farmers and pastoralists in five countries afflicted by locusts. Cressman is hopeful the money will come, but he’s concerned about the timing. As the insects continue to multiply, the need for aid could rise considerably, especially if more aggressive control measures aren’t implemented soon.