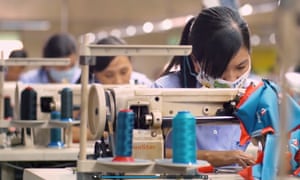 Gold standard: Deuter’s factory in Vietnam. Deuter is an outdoor wear company that has dealt with excessive overtime (a major trigger for harassment and abuse) and is an example of good practice and how brands can influence change. Photograph: Deute

Female factory workers producing clothing and shoes in Vietnam – many probably for major US and European brands – face systemic sexual harassment and violence at work, the Observer can reveal.

Nearly half (43.1%) of 763 women interviewed in factories in three Vietnamese provinces said they had suffered at least one form of violence and/or harassment in the previous year, according to a study by the Fair Wear Foundation and Care International out on Monday.

The abuse – which ranged from groping and slapping to rape and threats of contract termination – sheds a light on working conditions endured by women in some Vietnamese factories with as many as 20,000 employees, said Dr Jane Pillinger, a gender-based violence expert and author of the study.

“I am shocked that nearly 50% of the women interviewed had experienced some form of violence in the past year, and I’ve been working on this issue for 30 years,” she said. “There’s a significant culture of silence around this, and as a result the numbers are probably even higher: we know from feedback that some women wouldn’t answer the questions in the interviews, perhaps because they feared their responses would somehow get back to their employers or husbands.”

The age, education and migrant status of the employee – as well as her type of contract – determined the level of abuse, with younger and better-educated women, as well as migrant workers, worse off, the study found.

“We were shocked by the detrimental effect it had,” said Meurs. “Violence and harassment affect productivity, competitiveness and company reputation, as well as women’s integrity, health and wellbeing. It sounds simple, but most garment brands are not aware that they have so much influence on factory floor conditions.”

Although the names of the factories and the brands they supply were kept secret to encourage participation in the study, there is a “strong likelihood” that they include European and US brands, said Pillinger.

“The Vietnamese government has a strategy of attracting the [international] garment industry, and it has built massive factories that are producing fast turnarounds for mainly European and US markets in clothing, footwear and outdoor wear,” she said. “There is a strong likelihood they are involved because they’re major suppliers in Vietnam, but we can’t say which brands they are exactly. Regardless, they are linked to the brands in one context or another.”

About 2 million people are employed in Vietnam’s garment sector, more than 80% of them women. But women suffer disproportionately, the study found. Of the women interviewed, 43.1% claimed to have faced violence in the past year. The majority (87.7%) of them had experienced unwelcome verbal abuse and harassment, defined as inappropriate or offensive comments about their or someone else’s body, sexual jokes or activities. While 49.5% had experienced violence or harassment travelling to and from work; 34.3% had experienced physical harassment, such as kissing or touching, hitting, punching, or leaning; and 28.9% had experienced non-verbal harassment such as obscene gestures, sounds or stares, or offensive emails, texts or behaviour that impacted on their safety, such as being followed home.

Women described high-pressure working environments, so tense they were afraid to take toilet breaks for fear of repercussions. “I don’t dare to go to the toilet,” said one worker in Ho Chi Minh City. “If we go to the toilet too much, it’s recorded for attendance and our pay is deducted.”

“When they shout at us and scold us, it just makes it worse,” said an employee in Hai Duong province. “There’s a lot of shouting to get us to work harder.”

Despite the rising popularity of social media campaigns in Vietnam to raise awareness of sexual harassment, such as #MeToo and #ngungimlang (stop silence), most garment workers said they were too afraid to speak up, fearing the loss of their jobs or further harassment, according to the study.

Although Vietnam has a code of conduct on workplace sexual harassment, few suppliers were aware of the code or complied by it, the study found. But change is afoot: new trade agreements between the EU and Vietnam are in negotiation as the country prepares for new labour legislation, including a move to ratify International Labour Organisationconventions on collective bargaining and freedom of association.

Negotiations on a new ILO convention on workplace sexual violence and harassment are taking place in June. The convention is seen as crucial in advancing better conditions in garment factories around the world.

“Violence and harassment can be especially widespread in global value chains such as the garment industry, where high numbers of women work in low-skilled positions for low pay. These workers have little power or voice and need the protection of national and international law,” said the ILO’s workers’ group chair Catelene Passchier.

“A legally binding standard [sends] the clear message that violence and harassment are not to be accepted in the workplace, and that public authorities and employers have a responsibility to act on it.”

Encouragingly, the study found that women working in factories with clear complaints procedures recorded far lower levels of abuse than those without such procedures (25% compared with 58.7%), the study found. FWF is calling on brands which source in Vietnam to ensure suppliers fight workplace abuses by including clauses on sexual harassment and violence in their contracts, and by alleviating pressures by changing their contracting and purchasing practices.

Mark Held of the European Outdoor Group, whose members include some of the world’s best-known outdoor brands, said the outdoor industry’s seasonal demands could be blamed for some of the abuse described in the report.

My supervisor hits me and beats my hands with a stick. He throws things at me

“It’s clear that the key drivers for some of this violence and harassment has been caused by us – by the [garment] industry at large and by the fact that the outdoor industry is seasonal, so instead of having a steady flow of orders, there are distinct spikes that drive overtime and pressure to deliver,” said Held.

“It’s a never-ending task to try to get the evidence to drive the change that’s needed. And although we don’t know what factories the interviewees came from, it’s clear you’ll find examples of this all over. This evidence will help us drive the argument that there needs to be change.”

Marco Huenh, head of CSR at German outdoor equipment brand and FWF member Deuter, said the company revamped its contracts in 2015 with its Vietnamese factories after learning how high employees’ overtime hours were.

“We know that excessive overtime is a factor that can increase the presence of sexual harassment or verbal abuse of women workers on the production line. Workers who experience verbal abuse require almost one additional hour per day to reach their daily targets, which also reduces production,” Huenh told the Observer.

“To remove the trigger of production stress – one of the most common triggers for harassment – Deuter made radical changes to its purchase and ordering practice and developed a strong, stable partnership with our Vietnam supplier. As a result, we have radically reduced excessive overtime. Deuter has not had any complaints of harassment and our new production strategy has definitely reduced risks. It is just one reason why workers stay working in our factories for much longer than is usual in the Vietnam garment industry.”