A third of the planet’s land is severely degraded and fertile soil is being lost at the rate of 24bn tonnes a year, according to a new United Nations-backed study that calls for a shift away from destructively intensive agriculture.

The alarming decline, which is forecast to continue as demand for food and productive land increases, will add to the risks of conflicts such as those seen in Sudan and Chad unless remedial actions are implemented, warns the institution behind the report.

“As the ready supply of healthy and productive land dries up and the population grows, competition is intensifying for land within countries and globally,” said Monique Barbut, executive secretary of the UN Convention to Combat Desertification (UNCCD) at the launch of the Global Land Outlook.

“To minimise the losses, the outlook suggests it is in all our interests to step back and rethink how we are managing the pressures and the competition.”

Why meat eaters should think much more about soil

The Global Land Outlook is billed as the most comprehensive study of its type, mapping the interlinked impacts of urbanisation, climate change, erosion and forest loss. But the biggest factor is the expansion of industrial farming.

Heavy tilling, multiple harvests and abundant use of agrochemicals have increased yields at the expense of long-term sustainability. In the past 20 years, agricultural production has increased threefold and the amount of irrigated land has doubled, notes a paper in the outlook by the Joint Research Centre (JRC) of the European commission. Over time, however, this diminishes fertility and can lead to abandonment of land and ultimately desertification.

The JRC noted that decreasing productivity can be observed on 20% of the world’s cropland, 16% of forest land, 19% of grassland, and 27% of rangeland.

“Industrial agriculture is good at feeding populations but it is not sustainable. It’s like an extractive industry, said Louise Baker, external relations head of the UN body. She said the fact that a third of land is now degraded should prompt more urgent action to address the problem.

“It’s quite a scary number when you consider rates of population growth, but this is not the end of the line. If governments make smart choices the situation can improve,” Baker said, noting the positive progress made by countries like Ethiopia, which has rehabilitated 7m hectares (17m acres). 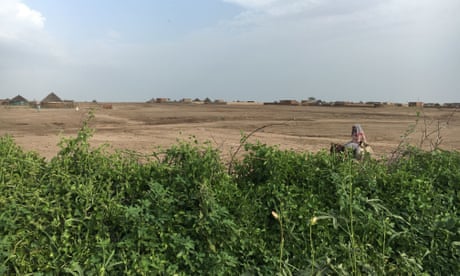 The impacts vary enormously from region to region. Worst affected is sub-Saharan Africa, but poor land management in Europe also accounts for an estimated 970m tonnes of soil loss from erosion each year with impacts not just on food production but biodiversity, carbon loss and disaster resilience. High levels of food consumption in wealthy countries such as the UK are also a major driver of soil degradation overseas.

The paper was launched at a meeting of the UNCCD in Ordos, China, where signatory nations are submitting voluntary targets to try to reduce degradation and rehabilitate more land. On Monday, Brazil and India were the latest countries to outline their plan to reach “land degradation neutrality”.

However, the study notes that pressures will continue to grow. In a series of forecasts on land use for 2050, the authors note that sub-Saharan Africa, south Asia, the Middle East and north Africa will face the greatest challenges unless the world sees lower levels of meat consumption, better land regulation and improved farming efficiency.