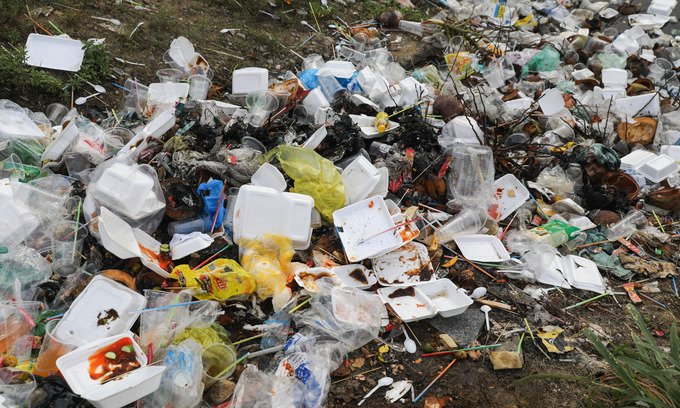 Agriculture- and medical-related plastics comprised only about 1 percent in number and 3 to 8 percent in weight, said the report, conducted from July 2020 to April 2021 in response to a request from Vietnam’s government to deepen knowledge about the different plastic waste types leaking into the country’s rivers and ocean, and identify their market alternatives for potential substitution.

The waste amount was surveyed in 24 river sites and 14 coastal sites, in 10 different cities and provinces: Lao Cai and Hai Phong in the north, Thua Thien Hue, Da Nang, Quang Nam, Khanh Hoa in the central region, and Ho Chi Minh City, Can Tho, Kien Giang and Soc Trang in the south.

In each location, three to four survey sites were selected, comprising both coastal and river areas, with each site spreading at least 100 meters long in parallel with the water. For each location, at least two team members, together with six to ten local volunteers, carried out the surveys.

The report suggested that addressing plastic pollution caused by single-use items should not be based on replacing those items with non-plastic single-use items, or plastic multi-use items, because “both may have negative impacts, and not align with Vietnam’s goal of a more circular economy.”

Thus, in promoting alternative products, the focus should be on promoting reusable, non-plastic items that support the overall reduction in the generation of plastic waste.

“Much greater effort is required to educate Vietnam’s population about waste reduction, reuse, and halting littering, in order to reduce the demand for low-utility plastic, support more cost-effective waste management infrastructure, and reduce littering that ends up in rivers and the ocean,” it said.

According to data released last year by the Ministry of Natural Resources and Environment, plastic waste accounts for 7 percent of the solid waste discharged every day in Vietnam, or nearly 2,500 tons.

Some 0.28-0.73 million tons of plastic waste enter the country’s seas every year.