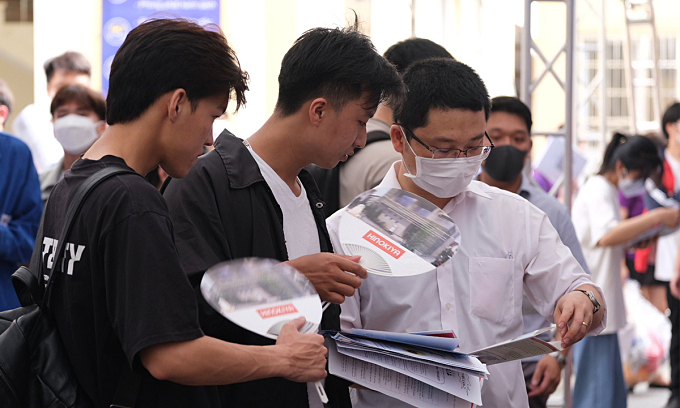 A recruiter (with mask) interacts with students at a job fair held at the Hanoi University of Industry, June 4, 2022. Photo by VnExpress/Duong Tam

Companies in Vietnam continue to face difficulties in recruiting both white and blue collar workers to fuel their post-Covid recovery operations.

“Every meeting, my boss asks me which position has been filled,” Vu Yen Phuong, Human Resources & General Affairs (HR&GA) leader of IT company Infoplus told VnExpress.

Normally, January-June period is the peak season for IT sector recruitment and job hopping is rife, Phuong said, adding that this year had bucked the trend.

“The number of applicants was down by 50-60 percent for all positions.

“Many candidates called for interviews, said they “no longer intended to change their jobs,” Phuong said.

FPT Telecom, a subsidiary of IT giant FPT Corp, recruits up to a thousand new employees every year.

“The quality of applicants has also declined,” Linh said, adding that firms now had to compete hard for candidates with the needed knowledge, skills and attitude.

The Japanese retailer requires 1,000 full-time workers and another 2,000 part-time workers for the second half of this year, she said.

Pham Quang Anh, director of Vietnam-based clothing manufacturer Dony, said workers were more eager to work seasonally and receive payment on a weekly basis since the beginning of this year.

They are less loyal to their factories and always ready to hop jobs, which can wreck the manufacturing sector’s post-Covid recovery, he said.

Current labor supply is unable to meet the post-Covid recovery demands of companies, the Ministry of Labor – Invalids and Social Affairs has said.

There was a shortage of 120,000 employees in the first quarter this year, or 10 percent of demand and 2-3 percentage points higher than that of previous years.

After the economic havoc wreaked by Covid-19 last year, many workers have begun favoring job stability.

Minh, 31, said he opted out of looking for a new job – which he had intended for over two years.

“I had my CV updated and scouted several new workplaces prior to the pandemic. My old job was stable but boring, so I wanted a more challenging position.”

But he changed his mind after the pandemic hit Vietnam hard. Many of his friends had their salaries reduced or even lost their jobs, while his old company never delayed paying his dues.

“As a result of the pandemic, employees are more attracted to stable jobs with good welfare and protection,” said Phuong of Infoplus.

Today, employees are more invested in a long-term workplace rather than a temporary one, and favor well-known firms, she added.

This has made hiring more difficult for to lesser-known firms that desperately need more workers.

Many workers have also gained insights into balancing their work and personal lives while working remotely.

Le Xuan Truong, 23, who worked for electronics manufacturer Top Opto in HCMC’s District 7, decided to quit and become a driver for a ride hailing firm while learning to be a barber.

The new job offers him freedom of time and a chance to pursue his dream job, he said.

“Flexibility” and “freedom of time” are the two of the most important factors in choosing a new job, besides “salary” and “training”, a March-April survey by recruitment platform Viec Lam Tot showed.

The rise of the internet and digital platform further accommodates those wishing to shift to a less formal sector, including online sales or content creators.

“Workers and their parents like finding work close to their family,” Ngoc said.

Huyen, a 28-year-old office employee, said she has just resigned from her job to “have more time for myself” after working for her firm for over six years.

She said she “realized there are more things to care about besides job” after struggling with it for two Covid-hit years.

“My boss has offered that I work part-time remotely, and I’m considering it.”