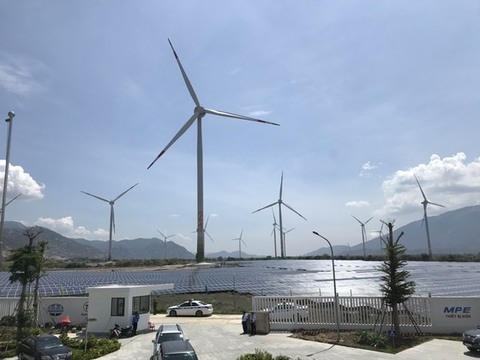 Nguyen Tam Tien, general director of the Trung Nam Group, the first and only enterprise so far allowed to invest in national grid transmission infrastructure, highly appreciated the Politburo’s Resolution No 55-NQ/TW on Viet Nam’s strategic orientations for national energy development through 2030 because it encourages private enterprises to invest in building renewable energy infrastructure.

In addition, Tien told the Voice of Viet Nam (VoV) that according to the resolution, Viet Nam would eliminate monopolies and barriers for the private sector joining the energy sector, including in the electricity transmission stage.

However, Tien said private enterprises need to have specific regulations for investment in power transmission infrastructure.

He has also proposed that Viet Nam should have a pricing mechanism for power businesses to take bank loans because the banks need those businesses to ensure power consumption while the electricity transmission system is not available to connect from the alternative power projects to the national power grid.

“The Ministry of Industry and Trade (MoIT) and Vietnam Electricity (EVN) must have this pricing mechanism,” Tien said.

Pham Dinh Thang, general director of the Asia Industrial Technology Joint Stock Company, one of the leading companies manufacturing equipment for electrical systems in Viet Nam, said that Vietnamese enterprises can apply new technology for producing electric equipment, however, core equipment is still produced by leading brands in the world.

The domestic support industry has not been able to meet the needs of industrial production, especially for the electricity industry, he said.

“The Government needs to support domestic manufacturing enterprises in this industry, such as mechanisms for capital mobilisation and tax,” Thang said.

Le Duy Hai, director of the Corporate Banking Division, Vietnam Joint Stock Commercial Bank for Industry and Trade, said that in the past two years, renewable energy emerged as a key investment channel for the bank. It also is expected to continue attracting investment in the near future.

However, when conducting evaluation and investment research, the bank realised that some renewable energy projects in Viet Nam are still risky.

The infrastructure, including electric lines and transformer stations, is not synchronised, so many projects fail to generate their full capacity on the national electricity grid, he said.

The electricity industry and the authorities need to have more specific and long-term mechanisms to encourage the private sector to invest in renewable energy projects.

The Public Private Partnership (PPP Law) effective from 2021 is also a legal framework to allow private investors to invest in power production and transmission projects, he said.

According to Resolution 55, by 2030, total power generation capacity is expected to increase to 125-130GW and electricity output is estimated to rise to 550-600 billion KWh.

Many solar power plants have managed to get hooked to the power grid early to enjoy the high electricity ….

Experts warn of scorching-hot growth of solar power in Vietnam