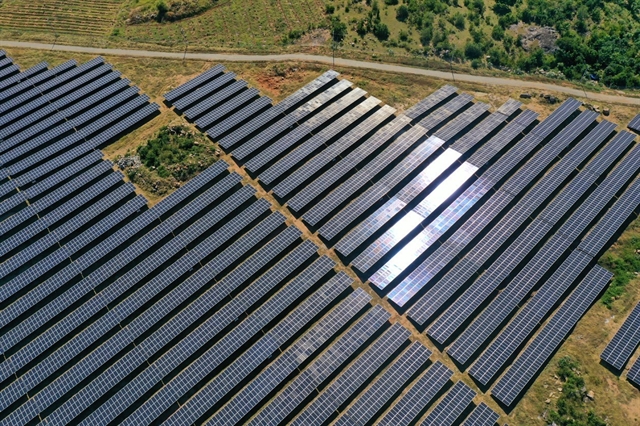 The Government Office has released this PM direction on this issue for the MPI, the Ministry of Industry and Trade and relevant agencies after local media has reported that a Thai investor has acquired solar power projects in Bình Phước.

According to reports, Thailand’s Super Energy Corporation Company Limited (Super Energy) has announced it has acquired the Lộc Ninh 1, 2, 3, 4 solar power projects in Bình Phước by buying those plants’ shares from intermediary companies with a total investment of US$456.7 million.

Super Energy’s power projects in Việt Nam have had a return on investment (EIRR) of 12-13 per cent while the Lộc Ninh 1,2,3,4 solar power projects have much higher EIRR between from 16.59 per cent to 17.4 per cent.

The Thai investor has also purchased shares in a series of other solar projects in other provinces, including Ninh Thuận and An Giang and shares in four wind power projects in Bạc Liêu, Sóc Trăng, Phú Yên and Gia Lai provinces.

These projects are expected to be in full or partial operation from the fourth quarter of 2021.

With the forms of joint venture or share transfer with Vietnamese enterprises, many foreign energy and investment groups have owned dozens of solar and wind power projects enjoying preferential rates of 9.35 US cents per kWh for 20 years in Việt Nam, the Tiền Phong (Vanguard) newspaper reported.

Of which, Thành Thành Công Group and Gulf Energy Group (Thailand) have set up a joint venture from mid-2019 to put investment to two solar power plants in Tây Ninh Province, TTC 1 and TTC 2.

Besides Thailand, many investors from Singapore, China and Philippines have owned many solar and wind power projects in Việt Nam.

According to experts, Việt Nam has had a strong development of solar projects after the State announced the attractive power purchase price at 9.35 US cents per kWh equivalent to VNĐ2,086 per kWh for solar power projects starting operation before June 31, 2019. This price would be for those projects within 20 years.

As a result, more than 300 solar power projects have been registered after this decision, breaking the Electricity Development Plan VII.

The Ministry of Industry and Trade (MoIT) noted the hot development of solar power projects has created a lack of synchronisation with development of transmission infrastructure at present.

Việt Nam is expected to have a total solar power output of at least 7 GW this year, too higher than the 0.8 GW national target for this year, according to the studies conducted by the GIZ German development cooperation agency’s Renewable Energy and Energy Conservation Project and the MoIT’s Department of Electricity and Renewable Energy.

Ninh Thuận, an attractive investment destination for power companies, has 30 solar power projects with a total capacity of up to 1,817 MW and a total investment capital of VNĐ50 trillion approved by the Prime Minister and the MoIT.

This province estimates to have 26 more solar power projects with a total capacity of 3,600 MW.

With massive solar power projects landing to many localities such as Ninh Thuận, Bình Thuận, Tây Ninh, Gia Lai, Hậu Giang and Quảng Ngãi, the MoIT reported, by the end of 2019, a total capacity of about 15,000 MW from solar power projects have been approved by the Prime Minister and the MoIT to put into the Electricity Development Plan VII.

That has created difficulties in developing the electrical grid in the regions nationwide and building electric transmission infrastructure for solar power projects connecting the national electrical grid, according to MoIT. — VNS