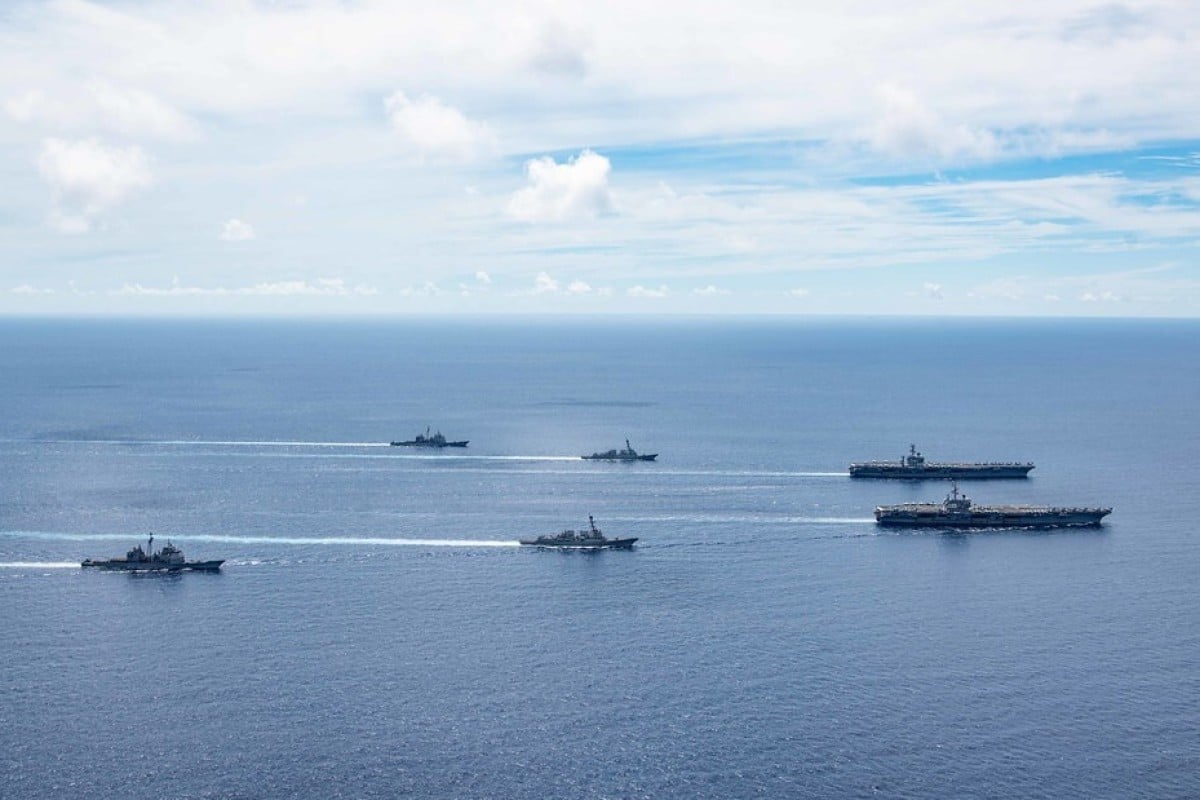 The US Air Force E-8C aircraft, which is fitted with specialist radar, communications, operations and control systems, was seen reconnoitring as close to 72 nautical miles off the coast of Guangdong province, according to the South China Sea Strategic Situation Probing Initiative, a think tank based at Peking University.

The sighting was the third this week, it said. Analysts said the plane was probably monitoring Chinese troop deployments and movement along the coast.

The think tank said also that a US Air Force E-3 Sentry early warning and control aircraft, which provides all-weather surveillance, command, control and communications, was spotted over the South China Sea.

Also on Friday, the US Navy said two of its aircraft carrier strike groups had conducted dual exercises in the South China Sea to boost their combat readiness.

The groups, led by the USS Nimitz and USS Ronald Reagan, were showing their “operational commitment to allies and partners in the region, providing combatant commanders with significant operational flexibility if needed in response to regional situations”, according to a report published on Friday on cpf.navy.mil, a news portal for the US Navy.

Rear Admiral Jim Kirk, commander of the Nimitz strike group, was quoted as saying the warships had been “operating in the South China Sea, wherever international law allows, to reinforce our commitment to a free and open Indo-Pacific, a rules based international order, and to our allies and partners in the region”.

The two groups conducted tactical air defence exercises to maintain combat readiness, the report said, adding that they trained “to the highest levels of readiness to ensure responsiveness to any contingency through power projection”.

“Security and stability is essential to peace and prosperity for all nations, and it is for that reason the US Navy has been present and ready in the Pacific for over 75 years,” Kirk said.

The US Navy said on July 4 that the two aircraft carrier strike groups had been deployed to the South China Sea “in support of a free and open Indo-Pacific”, while Chinese forces were staging a drill near the Paracel Islands, which are claimed by mainland China, Taiwan and Vietnam. 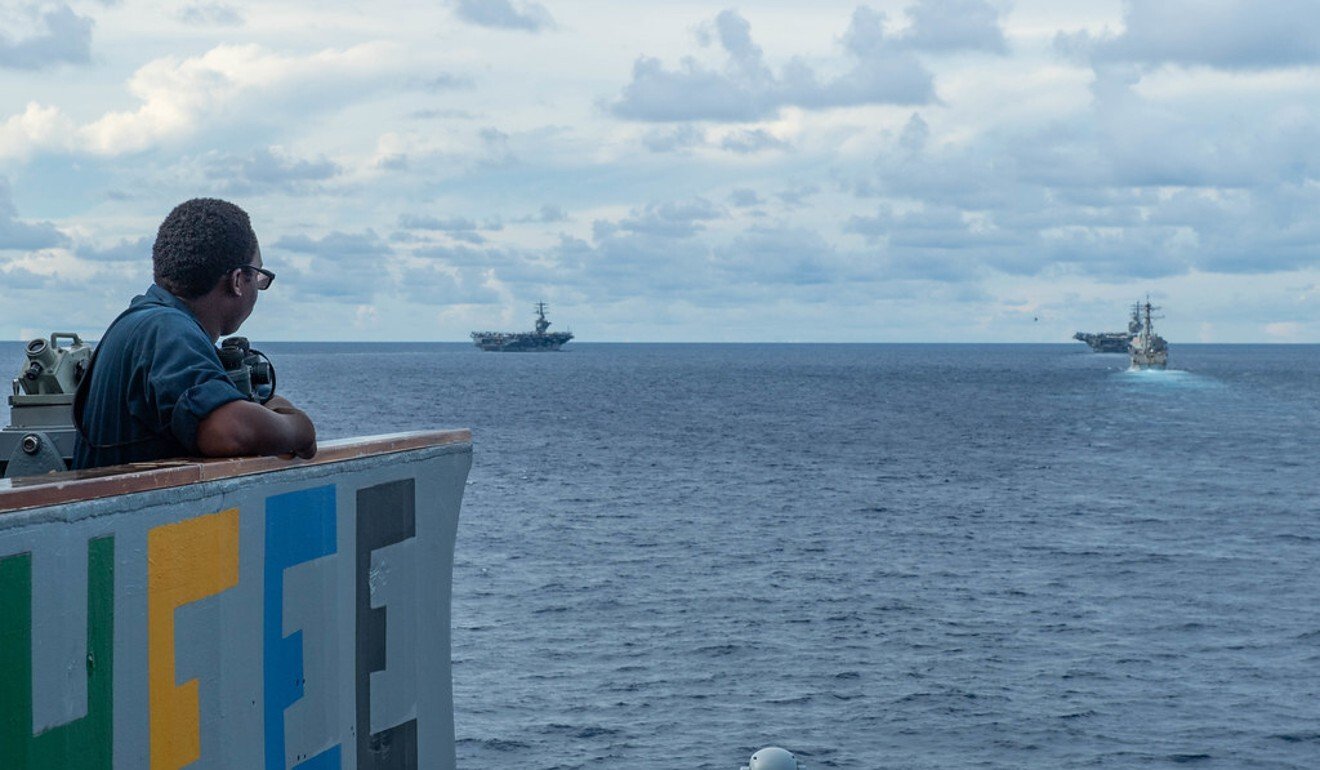 On July 10, the defence ministry in

, claiming the US had “carried out navigational hegemony” through its repeated deployments of warships to the region and describing Washington as the biggest driver of militarisation in the strategic waterway.

Kirk’s comments on the latest naval activity came after US Secretary of State Mike Pompeo said the US formally opposed Beijing’s territorial claims within the so-called nine-dash line that encompasses almost all of the South China Sea – in line with a 2016 ruling by an international tribunal at The Hague.

to the disputed waters but observers say most are unlikely to openly choose sides between the US and China.

Collin Koh, a research fellow at the S Rajaratnam School of International Studies at Singapore’s Nanyang Technological University, said the carrier strike groups’ operations showed the US Navy was intent on maintaining its freedom of navigation in the South China Sea regardless of the rising challenge from the Chinese military.

“The US Navy remains operationally ready and has been able to bring the Covid-19 contagion under control,” he said.

“The intended audience of such signalling isn’t just China, but also other regional governments to underline continued US security commitments.”

Purchase the 120+ page China Internet Report 2020 Pro Edition, brought to you by SCMP Research, and enjoy a 30% discount (original price US$400). The report includes deep-dive analysis, trends, and case studies on the 10 most important internet sectors. Now in its 3rd year, this go-to source for understanding China tech also comes with exclusive access to 6+ webinars with C-level executives, including Charles Li, CEO of HKEX, James Peng, CEO/founder of Pony.ai, and senior executives from Alibaba, Huawei, Kuaishou, Pinduoduo, and more. Offer valid until 31 August 2020. To purchase, please
This article appeared in the South China Morning Post print edition as: US military making waves in China’s backyard A US Navy MQ-4C Triton drone was seen flying towards the southeast of Taiwan on Wednesday. Photo: Handout

The United States has sent a high-altitude spy drone over

, a Chinese think tank said on Thursday, days after Washington declared most of Beijing’s claims in the hotly contested waterway were “unlawful”.

The US Navy MQ-4C Triton – a long endurance unmanned aerial vehicle – was seen flying towards the southeast of Taiwan at about noon on Wednesday, according to the SCS Probing Initiative (SCSPI), a Peking University think tank.

It said a US P-8A anti-submarine aircraft and a KC-135R aerial refuelling aircraft were also seen on Thursday flying southwest of Taiwan over the South China Sea.

While details of the air patrols were unclear, military observers said the US Navy appeared to be stepping up reconnaissance efforts in the strategic waterway that is

seen as a potential flashpoint between Beijing and Washington

The Triton drone seen on Wednesday is part of the US Navy’s Maritime Patrol and Reconnaissance Force. Operated autonomously using maritime sensors, it can work with the manned anti-submarine aircraft to carry out intelligence, surveillance and reconnaissance missions over vast ocean and coastal regions.

Song Zhongping, a Hong Kong-based military expert, said the US Navy could be seeking to track underwater activities by the Chinese navy.

“The deployment of surveillance aircraft such as the MQ-4C, P-8A and P-3C [Orion maritime patrol and anti-submarine warfare aircraft] could help the US Navy to reconnoitre warship, submarine and other underwater activities in the region as they are able to detect sound pulses and track submarines,” Song said.

. The move has raised concerns about a possible military confrontation between the two superpowers that are already at odds over issues ranging from trade to human rights and Hong Kong.

A day after Pompeo’s statement, guided-missile destroyer the USS Ralph Johnson carried out a freedom of navigation operation in the South China Sea, sailing near the disputed Spratly Islands, the US Pacific Fleet said in a statement. Known as the Nansha Islands in Chinese, they are also claimed by the Philippines, Malaysia, Taiwan and Vietnam.

According to the SCSPI, the US warship sailed within 12 nautical miles of Beijing-controlled Cuarteron Reef for the first time since 2016, and Fiery Cross Reef for the sixth time this year. A US warship sailed within 12 nautical miles of Cuarteron Reef on Tuesday, according to the SCSPI. Photo: Weibo

The US has increased its so-called freedom of navigation and overflight operations in the South China Sea as part of efforts to challenge China’s military build-up and land reclamation projects in the disputed waters. Beijing has rejected these patrols and accused the US and its allies of raising tensions in the region.

According to the Asia Maritime Transparency Initiative (AMTI) at the Centre for Strategic and International Studies, a Washington-based think tank, China has significantly expanded Cuarteron Reef since 2013, building helicopter pads, radar facilities and possible gun or missile emplacements.

China has also carried out land reclamation work at Fiery Cross Reef since 2014, turning it into one of its biggest artificial islands with an airbase, 3,000-metre runway and shelters that could house mobile missile launchers, according to AMTI.