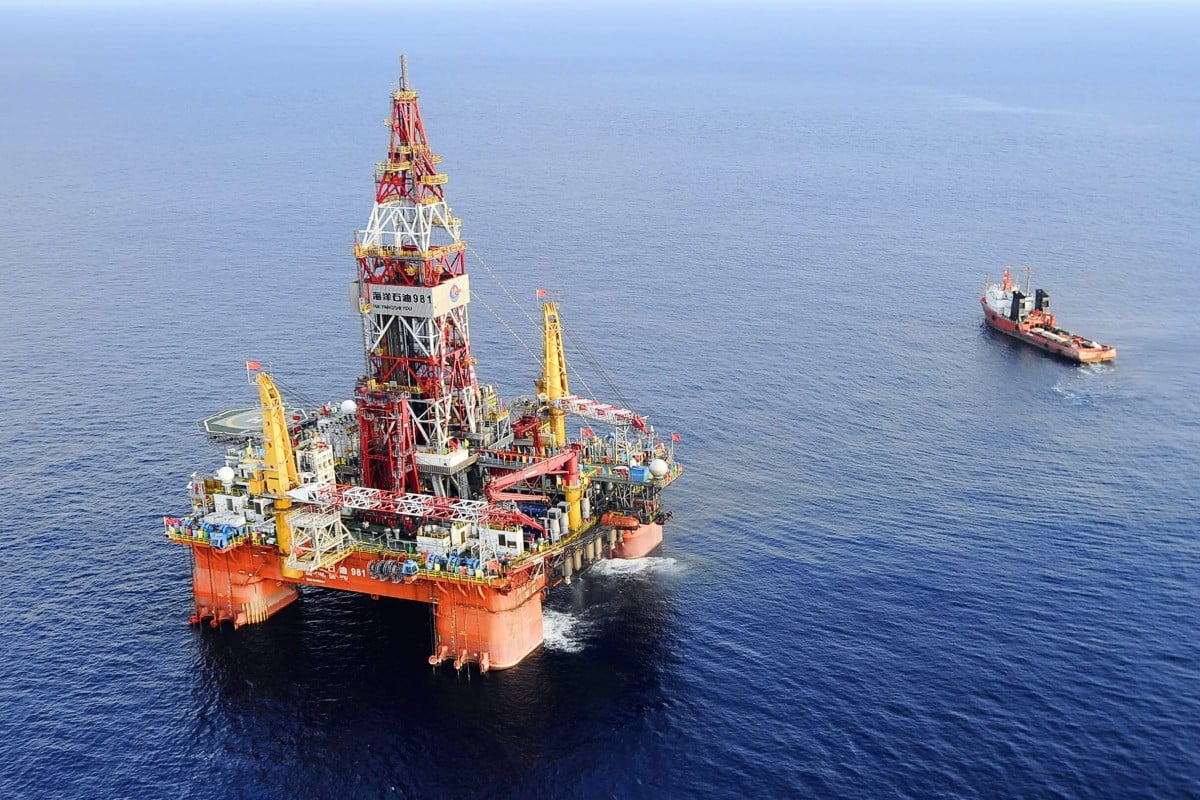 The US has accused Beijing of bullying its regional neighbours in the South China Sea. Photo: AP

South China Sea. David Stilwell, the US assistant secretary of state for East Asia and Pacific affairs, this week accused China of using its state-owned firms to bully its regional neighbours to secure oil and mineral reserves. He also hinted that the US might respond with sanctions against the officials and enterprises involved.

During a speech at the Centre for Strategic and International Studies on Tuesday, Stilwell named state-owned China Communications Construction Company (CCCC), which has helped to develop many of the man-made islands in the South China Sea, and

, which has positioned a massive drilling rig in disputed waters also claimed by Vietnam.

While he did not say what the sanctions might involve, US Senator Marco Rubio earlier pushed for sanctions against a number of Chinese state-owned companies – including CNOOC, CCCC and two of its subsidiaries – demanding the US government block their assets in the US and exclude company officials from doing business in the US.

, raising the risk of a possible confrontation between the two countries.

Beijing claims most of the South China Sea and its offshore resources based on its so-called nine-dash line, but many of its neighbours, including Vietnam, the Philippines, Malaysia and Brunei, hold opposing views.

Observers said any sanctions would depend on how the US and Southeast Asian countries defined China’s actions.

“Agreement between the US and Southeast Asian countries about when and where China can be considered to be acting unlawfully … sets the stage for negotiations or judicial action by the aggrieved states,” said Jay Batongbacal, an international maritime affairs professor at University of the Philippines.

“For example, if CNOOC were to try to award exploration blocks over an area of Malaysia’s continental shelf, Malaysia and the US would be justified in taking legal action against CNOOC, if CNOOC had other business with them,” he said.

CCCC has worked closely with Southeast Asian countries, and in December won a US$10 billion deal to build an international airport outside Manila under the belt and road programme.

Soon after the Philippines filed a lawsuit against China in The Hague in 2013, Beijing launched unprecedented dredging in the Spratly Islands in the South China Sea to create seven artificial islands, International Financial News, a newspaper affiliated with Chinese Communist Party mouthpiece People’s Daily, reported in 2015.

In May 2014, shadowed by as many as 86 Chinese vessels, including a navy frigate and two amphibious landing ships, the US$1 billion Haiyang Shiyou 981 drilling rig was moved to waters near the Paracel Islands in South China Sea.

Beijing said the rig was operating within its territory, but Hanoi said its position was within Vietnam’s exclusive economic zone. It also accused Beijing of using bullying tactics and trying to ram Vietnamese fishing boats in the energy-rich waters.

The drilling platform was removed in July the same year, which Beijing said was in line with its original plans.

Beijing has been widely criticised for its island-building and militarisation of the South China Sea. Chinese state-owned companies have been widely involved in the development, with satellite images analysed by defence consultancy IHS Jane’s showing Tianjin Dredging Company – a CCCC subsidiary – as playing a part in developing coral atolls – including Mischief, Suba and Fiery Cross reefs – into larger islands that are now home to airstrips and military installations.

Purchase the 120+ page China Internet Report 2020 Pro Edition, brought to you by SCMP Research, and enjoy a 30% discount (original price US$400). The report includes deep-dive analysis, trends, and case studies on the 10 most important internet sectors. Now in its 3rd year, this go-to source for understanding China tech also comes with exclusive access to 6+ webinars with C-level executives, including Charles Li, CEO of HKEX, James Peng, CEO/founder of Pony.ai, and senior executives from Alibaba, Huawei, Kuaishou, Pinduoduo, and more. Offer valid until 31 August 2020. To purchase, please
This article appeared in the South China Morning Post print edition as: State firms face threat of US sanctions over their roles in South China Sea