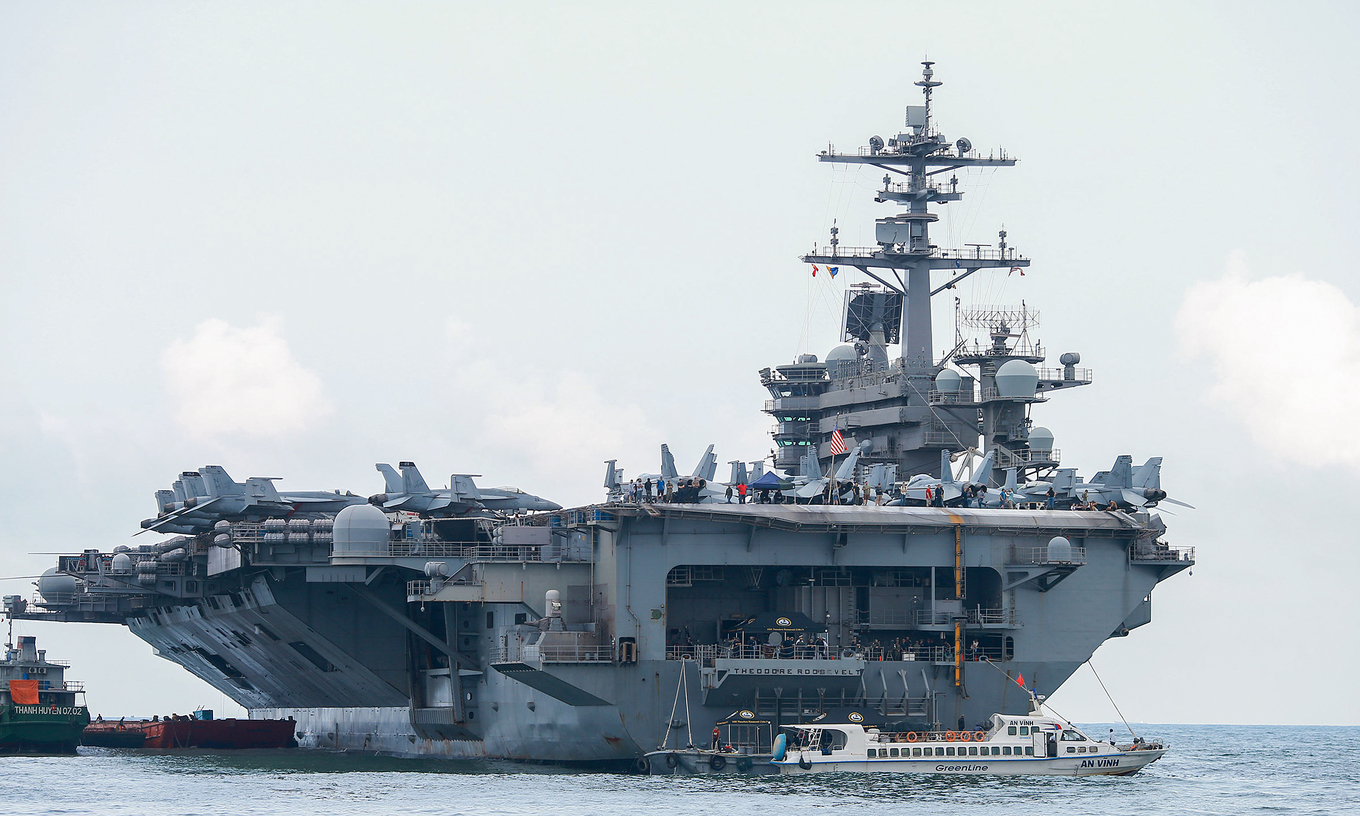 U.S. military officials are almost certain that Vietnam is not the source of a deadly Covid-19 outbreak on aircraft carrier Theodore Roosevelt.

They believe that the outbreak, which has seen almost 600 sailors on board get infected, was caused by a series of flights conducted by the carrier’s air wing, the Wall Street Journal reported Wednesday.

The aircraft recorded its first infections of the novel coronavirus in three sailors on March 23. From then on, the virus was transmitted rapidly, forcing the carrier to suspend a deployment in Asia and switch to port in Guam, a U.S. island territory in Micronesia, in the Western Pacific.

More than 4,000 crew members were moved ashore and enough people kept on board to attend to the ship’s nuclear reactors and other systems.

Last Tuesday, a sailor was admitted to an intensive care unit (ICU) in Guam, a day after another sailor from the carrier died after contracting the virus.

The sailor who died had become infected while he was on the carrier.

In a statement Tuesday, the U.S. Navy said the sailor had been moved to the ICU for “increased observation due to shortness of breath.” Three other sailors from the carrier are being treated at the U.S. Naval Hospital in Guam for coronavirus symptoms.

There was some speculation that the carrier’s trip to Da Nang in early March might have triggered the outbreak with one of the sailors contracting the virus.

Speaking on April 4 about a decision to relieve the ship’s captain Brett Crozier off his command, President Donald Trump said: “I guess the captain stopped in Vietnam and people got off in Vietnam. Perhaps you don’t do that in the middle of a pandemic, or something that looked like it was going to be, you know, history would say you don’t necessarily stop and let your sailors get off.”

Crozier was relieved of command after writing a letter regarding Covid-19 cases aboard ship on March 30.

A Reuters report said the U.S. Navy relieved the captain of his command as a way of “punishing him for the leak of a scathing letter he sent to superiors that sought stronger measures for curbing a coronavirus outbreak aboard the ship.”

An April 5 Asia Times commentary said a close reading of Captain Crozier’s March 30 letter makes it clear that the Navy did not equip the carrier with proper testing capabilities or provide instructions on what to do if anyone got sick.

The USS Theodore Roosevelt docked at the Tien Sa Port in Da Nang in central Vietnam on March 5, beginning a five-day visit. It had docked at the port along with cruiser USS Bunker Hill.

The carrier alone has 5,000 crew members and along with the cruiser, a total of 6,500 military personnel visited Vietnam, their visit an event marking the 25th anniversary of U.S.-Vietnam diplomatic relations.

Military officials are now saying that they do not think the coronavirus outbreak aboard the aircraft carrier was a result of the ship’s visit to Vietnam, because no crew member appeared to contract the virus until March 24 or March 25, which means more than two weeks after the Da Nang visit.

Given the incubation periods observed for the Covid-19 virus, the two-week time frame eliminates the port visit as a source of what has become the U.S. military’s largest outbreak among service members, they said.

The five-day period when the aircraft carrier was in Vietnam was a period when the nation enjoyed 22 straight days of no new infections, starting from mid-February and lasting until March 6, when some cases were reported in Hanoi.

When the carrier and cruiser visited the country, Vietnam had confirmed just 16 infections and all of them had been discharged from hospitals.

During their stay in Da Nang, the officers and crew members attended various meetings and events, played games with their Vietnamese naval counterparts and took part in community activities.

City officials and reporters had been invited for a tour of the aircraft carrier. Everyone going on the tour had been checked for Covid-19 and anyone who had traveled through or from China or had direct contact with infected patients were not allowed on board.

Only after the aircraft carrier had left Vietnamese shores did a new wave of infections break out in the country, with all the confirmations comprising Vietnamese citizens returning from abroad, and foreign tourists visting the country. It was not until early this month that health authorities confirmed Vienam has entered the third stage of the epidemic with several cases of community transmission cases.

U.S. military officials, as the Wall Street Journal report said, now assume that outbreak on board the aircraft carrier originated from trips made by the carrier’s flight crew.

U.S. aircraft carriers normally have dozens of aircraft on board, along with flight crew and pilots.

The first cases of coronavirus on board the Roosevelt were among members of the carrier’s air wing, they noted.

The USS Carl Vinson visited Da Nang for five days in 2018. That visit marked a milestone in diplomatic ties between the two former enemies. It was the first time a U.S. Navy aircraft carrier docked in Vietnam, four decades after the end of the Vietnam War.