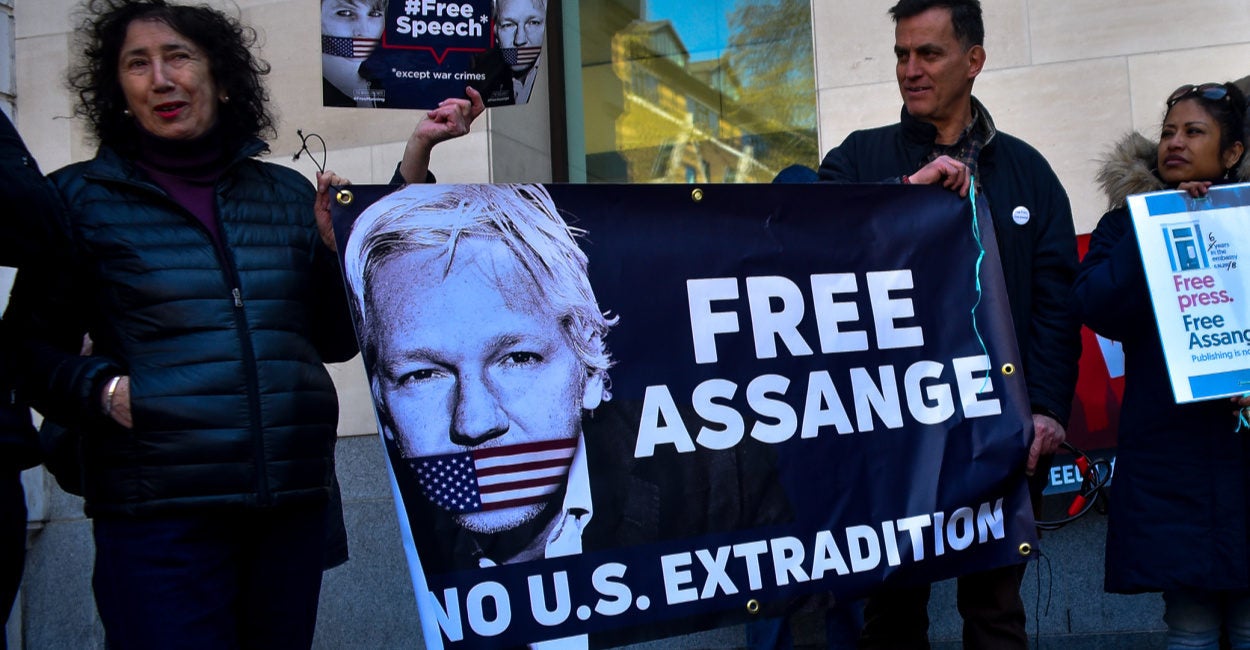 Julian Assange supporters demonstrate outside of Westminster Magistrates’ Court in London on April 11. After weeks of speculation, the WikiLeaks founder was arrested by Metropolitan Police inside the Ecuadorian Embassy in London. (Photo: Alberto Pezzali/NurPhoto/Getty Images)

WikiLeaks founder Julian Assange is finally going to face the music. According to many across the political spectrum, he is no hero. To a handful of others, he is.

For the last seven years, Assange has avoided accountability for his conduct by holing up in the Ecuadorian Embassy in London, at a cost of over $3 million. But that ended this week. At a news conference on Thursday, Ecuadorian President Lenin Moreno said, “We’ve ended the asylum of this spoiled brat.”

The serial publisher of classified and other material was, according to news reports, a horrible guest. Assange reportedly had horrible hygiene, and faced allegations that he physically harassed his caretakers, smeared his own fecal matter on the walls, and reportedly compromised the embassy communications system, which allowed him to access and intercept the official and personal communications of staff.

Now that his asylum is officially over, he must confront his legal challenges, as the United Kingdom, Sweden, and the United States each has filed charges against him for various alleged crimes.

Recall that in 2012, Assange took refuge at the Ecuadorian Embassy in London to avoid extradition to Sweden over a sexual assault case, and he has been there ever since.

Immediately after his asylum was revoked, a bearded and disheveled Assange was dragged out of the embassy by British police and arrested on the U.K. warrant for skipping bail. He was also arrested pursuant to the U.S./U.K. Extradition Treaty, in connection with a U.S. federal charge of conspiracy to commit computer intrusion.

Assange was taken to a courtroom in London, where he was found guilty of the bail-skipping offense. He will be sentenced on May 2. He faces up to a year in jail and remains in a British jail pending sentencing.

That’s where things get interesting, as there is an open question as to what happens to Assange after he is sentenced on the U.K. bail-skipping charge. Will he go to Sweden to face the sexual assault charges, or the United States for the computer conspiracy charge, or what?

Assange’s legal team has vowed to fight extradition to any country, and somepredict it could take years, and that his legal woes are just beginning. And since he is a political cause celebre who has a fan club, he may have the financial means to sustain his efforts to avoid extradition, at least for a while.

The reason Assange may be fighting extradition is because the charges against him in the United States and Sweden are quite serious.

As for the allegations against Assange in the United States, the Department of Justice issued a press release this week that included the indictment against Assange, and its intent to extradite him to answer for the charge. If convicted, Assange faces a “maximum penalty of five years in prison.”

According to the Justice Department press release, “the charge relates to Assange’s alleged role in one of the largest compromises of classified information in the history of the United States.”

Assange engaged in a conspiracy with Chelsea Manning, “a former intelligence analyst in the U.S. Army, to assist Manning in cracking a password stored on U.S. Department of Defense computers connected to the Secret Internet Protocol Network (SIPRNet), a U.S. government network used for classified documents and communications.”

According to the indictment, Manning (who was convicted at a court-martial for her conduct), “between … January 2010 and May 2010 … downloaded four nearly complete databases from departments and agencies of the United States. These databases contained approximately 90,000 Afghanistan war-related significant activity reports, 400,000 Iraq war-related significant activity reports, 800 Guantanamo Bay detainee assessment briefs, and 250,000 U.S. Department of State cables.”

Assange’s alleged assistance in helping Manning crack the passwords to the government computers “allowed Manning to log on to the computers under a username that did not belong to her. Such a deceptive measure would have made it more difficult for investigators to determine the source of the illegal disclosures,” according to the press release.

The Washington Post, a recipient and publisher of some of WikiLeaks material, editorialized that Assange is “not a free-press hero.” According to the Post, “contrary to the norms of journalism … Assange sometimes obtained such records unethically—including … by trying to help now-former … soldier Manning hack into a classified U.S. computer system.”

Rebutting the notion that WikiLeaks is a journalist, the Post goes on, saying: “Unlike real journalists, WikiLeaks dumped material into the public domain without any effort independently to verify its factuality or give named individuals an opportunity to comment.”

Over in Sweden, the director of public prosecution, Eva-Marie Persson, issued a statement saying that the counsel for the alleged rape victim has requested the investigation to be resumed. “We will now examine the case in order to determine how to proceed. The investigation has not yet been resumed, and we do not know whether it will be.”

The statute of limitations for rape in Sweden would expire in August 2020, so they have time to re-bring the charges if they decided to do so.

One thing is for sure: Assange will be in the news again for some time.

Some blame him for contributing to Hillary Clinton’s 2016 presidential loss because WikiLeaks published emails hacked from John Podesta and the Democratic National Committee. Others blame him for his reckless publications of the Afghanistan, Iraq, Guantanamo, and State Department information that harmed our national security, put lives in danger, and sullied diplomatic relations. Others defend him, claiming he is a journalist and brave defender of the free press.

Only time will tell how history judges him.