Washington (CNN) – Secretary of State Mike Pompeo announced the US will deny or revoke visas for International Criminal Court staff.

The move is meant to deter a potential investigation by the judicial body into alleged war crimes and crimes against humanity committed by US troops in Afghanistan.

Pompeo, speaking from the State Department Friday, said the restrictions include “persons who take or have taken action to request or further such an investigation.” He said the policy had already taken effect, but declined to say who had been restricted or would face future restrictions.

Pompeo also warned about potential economic sanctions “if the ICC does not change its course.”

ICC spokesperson Fadi El Abdallah told CNN that the court was aware of Pompeo’s speech. In a statement he said that the court is “non-political and “an independent and impartial judicial institution crucial for ensuring accountability for the gravest crimes under international law.”

“The ICC, as a court of law, will continue to do its independent work, undeterred, in accordance with its mandate and the overarching principle of the rule of law,” he added.

In November 2017, ICC prosecutor Fatou Bensouda sought authorization to open an investigation into crimes connected to the conflict in Afghanistan. According to a statement from the time, Bensouda’s office “determined that there is a reasonable basis to believe” that members of the US armed forces and the CIA committed “war crimes.” The ICC has not yet made a decision on whether to authorize that investigation. 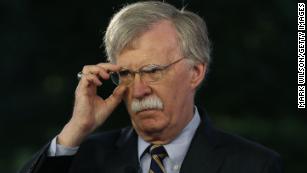 US threatens sanctions against International Criminal Court, will close PLO office in Washington

Pompeo slammed the potential investigation an example of “politically motivated prosecutions of Americans.”

“The first and highest obligation of our government is to protect its citizens and this administration will carry out that duty,” Pompeo said Friday.

The secretary of state also warned that “these visa restrictions may also be used to deter ICC efforts to pursed allied personnel including Israelis without allies’ consent.” The Palestinians have asked the ICC to investigate Israel for alleged human rights abuses.

Friday’s actions by the State Department followed a September 2018 threat from National Security Adviser John Bolton that the US would “use any means necessary to protect our citizens and those of our allies from unjust prosecution by this illegitimate court.”