A coalition of environmental groups in the Netherlands said Tuesday that they will hand over a court summons on April 5 if Shell does not change its business model to comply with the Paris climate accord.
The groups have accused Shell of “deliberately obstructing” efforts to keep global warming well below 2 degrees Celsius, the key goal of the Paris agreement. Pressure on companies has been building since the UN warned last year that the world has only 12 years to avert a climate disaster.
The oil giant was first threatened with a lawsuit last year by the Dutch branch of Friends of the Earth. Greenpeace and ActionAid joined the initiative on Tuesday, along with four other groups.
Shell (RDSA), which is headquartered in the Netherlands, has said it “strongly supports” the Paris agreement. It has committed to halving the carbon footprint of the energy it sells by 2050.
But the climate activists argue that its fossil fuel activities are inconsistent with the document signed by nearly all of the world’s governments in Paris in 2015.
“The company has no concrete plans to align its business strategy with the commitments contained in the agreement,” Joris Thijssen, the director of Greenpeace Netherlands, said in a statement.
The legal action threatened by the groups would seek to establish that Shell is responsible under Dutch law for its contributions to climate change and for associated environmental damage.
BP will link bonuses for 36,000 workers to climate targets
The activists are hoping to obtain a court ruling that would force Shell to make a major shift toward renewable energy.
Shell last year rejected changes to its business demanded by Friends of the Earth. On Tuesday, it said that legal action would not produce the change wanted by activists.
“Tying up individual companies in a lengthy court process cannot replace policies that will encourage lower-carbon choices by all business and consumers,” the company said in a statement.
Major oil producers including Shell have come under increasing pressure from consumers and shareholders over their role in climate change. 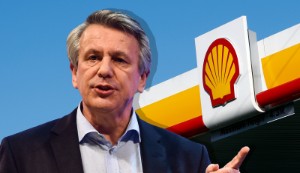 Shell is tying executive pay to carbon emissions. Here’s why it could create real impact
Shell agreed in December to establish short-term carbon emissions targets starting in 2020 following pressure from investors. It will also link executive pay to hitting the targets.
Rival energy producer BP (BP) pledged in February to align its business more closely with global climate goals and link the bonuses of 36,000 employees to greenhouse gas reduction targets.