vietnamnet
VietNamNet Bridge – Hai Phong is the main port of northern Vietnam and a commercial and industrial centre. It is the third most populous metropolis in the country.

100km from Hanoi, Hai Phong is a lovely city that retains a colonial look. The city is also known as ‘The City of Flame Flowers’ because most of its streets are lined with flame flower trees.

Hai Phong serves as a pleasant base when visiting other north-eastern spots such as Cat Ba and Halong Bay.

In Hai Phong, there are many places worth visiting and these include temples, shrines, pagodas and mausoleums. There is also a beach and communal house that tourists often frequent. The town is also known for a handful of festivals, including one which involves buffalo fighting.

Hai Phong is also known as a tourist hub and features good hydrofoil and ferry links to Halong Bay, Cat Ba Island and many popular islets nearby. In the past it was an important international seaport and nowadays serves as the country’s fastest-developing industrial city.

Still, it has its share of attractions, such as Du Hang Buddhist Temple, Nghe Temple, Hang Kenh Communal House and the French influenced Municipal Theatre. The popular Do Son Beach casino is only some 20km from Hai Phong. It is a well-liked resort town frequented by domestic tourists, many of whom come to watch the choi trau (Do Son Buffalo-Fighting Festival) which draws a large crowd of spectators each year.

Bao Dai Villa was the summer palace of Bao Dai, Vietnam’s last emperor. Located on top of Vung Hill, the villa was original built in 1928 by the French Governor-General of Indochina who later in 1949 offered it to Bao Dai.

The emperor frequently used the villa when he visited this part of Vietnam, especially during summer.

Now the villa is a hotel and guests can enjoy not only the same beautiful views of Do Son Peninsula as the last emperor but also admire the vintage royal family photos as well in their living quarters. One of its main attractions is Bao Dai’s throne. Don’t miss the chance to try on the royal-like costumes and pose for the camera as a special souvenir to bring home.

Opening Hours: All year round
Location: Vung Hill in Do Son Zone II

Cat Ba is located about 50km to the east of Hai Phong and is the largest and most frequented of the 366 islands in Lan Ha and Ha Long bays.

Beaches and tropical green forests are the key attractions that draw people to Cat Ba and it has also been named by UNESCO as a ‘World Biosphere Reserve’.

The island is charming, with friendly locals, fresh air, clear water, lots of seafood and many outdoor activities. Most of the islanders still lead a simple way of life and are in harmony with Nature; they were fishermen and farmers long before tourism and newer industries such as shrimp farming arrived.

Opening Hours: All year round.
Location: About 50km to the east of Hai Phong

Do Son Beach is situated between the Van Uc and Lach Tray Rivers and 22km from the southwest of Hai Phong City.

It was a popular resort town for the French and influential Vietnamese during the colonial days. All three of Do Son’s beaches are popular for swimming, kite flying or sunbathing among many other beach activities.

Since it is only a two-and-a-half-hour drive from Hanoi, Do Son gets many Hanoians during weekends. Known also as the only place in the country with a casino, Do Son is equally famous for its traditional annual Buffalo Festival (usually falling in September or October). 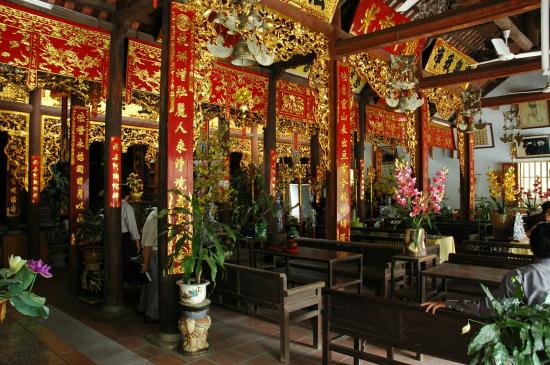 Du Hang Buddhist Temple was established in the 17th century under the Ly Dynasty and went through several reconstructions over the years. It features a pagoda, a bell tower, many sophisticated carvings of guardians, Buddha images, lovely gardens with an interesting bonsai collection and some important vintage objects.

Bring along some bread if you want to feed the turtles and fishes in a small pond within the compound too. Basically, a ‘dress with respect’ attitude is best when entering any religious sites in Vietnam.

Hang Kenh Communal House (also referred to as Nhan Tho Communal House) is a must-see landmark in Hai Phong and is located in Du Hang Kenh Ward, Le Chan District not far from Du Hang Pagoda.

The long and narrow structure was built in 1717 as a communal house of the then Kenh Village and is used as a temple. It’s famous for its remarkable woodwork, including huge ironwood pillars that support the roof.

The pavilion also houses many interesting items such as fantastic dragon images and statues (there more than 300 of them). Hang Kenh Communal House is also where many important festivals and religious ceremonies are held each year.

Hai Phong Museum features Gothic-style architecture and was founded around 1900. The items displayed might not be huge in terms of variety but it offers enough inside knowledge about Hai Phong in general and explains the city’s role in ancient times, why it is an important seaport as well as its role in recent wars.

Due to its unusual opening hours, the museum attracts fewer visitors than most.

The Municipal Theatre or the Great Theatre,is conveniently located in the city centre. The two-story building was constructed in 1904 with a French design. The interior is splendid and is able to seat 400 people while outside the building is more of a modern set up with a big square, a lovely flower garden, water fountains and twinkling lights. Many important events are regularly held here each year.

The Museum of Military Region III was founded in 1969, under the Political Bureau of Military Region III. Visitors will see many interesting war exhibitions showing how throughout history the Vietnamese struggled to defend themselves against various intruders; for example their resistance against French colonialism between 1945-1954 and American imperialism between 1954-1975.

Hai Phong’s Navy Museum features a large ship adjacent to Rao Bridge on the main road that links Do Son Resort to downtown Hai Phong. This navy museum founded in 1975 displays many interesting articles from its war years.

Nghe Temple, located not far from the Municipal Theatre, is more than just a religious site. It has strong historical symbolism as it was devoted to Le Chan, the founder of Hai Phong City.

Le Chan was a female general who fought the Chinese alongside Vietnamese national heroines, the Trung Sisters in the year 43 AD. The temple started as a small shrine but was later rebuilt and expanded and has long been an important religious site for many local worshipers.

One of the most remarkable facets of this place are the stone works. They are outstanding.

Tam Bac Lake is located not far from the old colonial quarter and is a nice place to relax or even go fishing.

The trees along the lake banks make the visit a pleasant walk. Visitors will see an interesting flower market or quán hoa at the eastern side of the lake. It was established around 1941 by the French as a small centre selling fresh flowers and is made up of five beautiful arched-roof kiosks.

Also within easy walking distance not far from the lake area stands the Le Chan Woman General Statue, the founder of Hai Phong. The brass-cast statue weighs 19 tons – one of the heaviest statues in the country.

Hai Phong suffered during the Vietnam War but it has still managed to keep its own colonial charm as seen along Dien Bien Phu Street and Tran Hung Dao Street. The area is known as the Colonial Quarter and has interesting French-style architecture as well as broad avenues.