China’s president Xi Jinping, who had been in the former British colony on a three-day tour, flew out of Hong Kong just hours before the annual protest kicked off in Victoria Park on Saturday afternoon.

But organisers said they remained determined to let Hong Kong’s political masters in Beijing know how they felt after two decades of Chinese rule.

“We know he has gone back to Beijing but we still want to show that they cannot ignore our voice,” said Howard Cheng, 28, one of the leaders of the group that organises the rally, the Civil Human Rights Front (CHRF). “He came to Hong Kong but he didn’t want to hear the real voice of the Hong Kong people.”

Cheng accused Beijing of offering “fake democracy” to Hong Kong’s 7.3 million residents. “We are here to fight for democracy and universal suffrage.”

Organisers said more than 60,000 people joined the 3km march, which has been held nearly every year since Hong Kong returned to China in 1997.

Saturday’s rally, which will be followed by a massive pro-Beijing firework display celebrating the anniversary, kicked off at about 3.30pm local time.

A column of protestors surged westwards from the park towards Hong Kong’s financial centre, carrying flags, banners and yellow umbrellas – the symbol of 2014’s mass protests – stamped with the words: “Power to the people”.

Many demonstrators carried messages of dissent on black and white T-shirts emblazoned with slogans such as: “Never back down”, “fight for Hong Kong,” and, more poetically, “being born in uncertain times carries certain responsibilities”.

The protesters and their leaders said they hoped to use the anniversary of Britain’s departure to voice their disgust at Beijing’s refusal to grant them genuine democracy and its alleged erosion of their autonomy and freedoms.

A series of political scandals – including the abduction of a group of local booksellers by mainland agents – have left many convinced that Beijing is preparing to take a harder line with those who question its rule over the former colony.

Eddie Chu, a 39-year-old environmentalist and pro-democracy politician, said the rally was “the most important chance to show the power of the people”. “My message is: give us the power that we deserve,” he said. 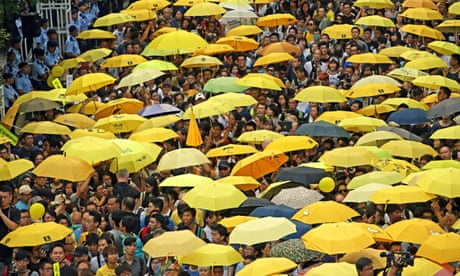 ‘We wanted democracy’: is Hong Kong’s two-systems experiment over?

Michelle Wang, a 58-year-old protester, had come armed with a homemade placard that read: “July 1 is no celebration”.

“One country, two systems: what a lie!” she fumed, referring to the system under which Hong Kong returned to China’s control, but with far greater freedoms than the authoritarian mainland.

“I was born in Hong Kong. I see everything changing,” Wang went on. “Year after year things are happening. We don’t want to see so much influence from mainland China. We do not have universal suffrage. Maybe we will never have it. That’s why we are so angry.”

Jaco Chow, an activist from the New School for Democracy group, said that unlike many of the marchers, the Communist party was not his main focus.

“The biggest problem is always the capitalists,” the 33-year-old said. “The Chinese Communist party is another serious problem of course. But capitalists are the real problem.”

As the crowds surged past, through Hong Kong’s Wan Chai neighbourhood, Chow declared himself a proud Corbynista. “He’s cool. I hope Hong Kong can have a political icon like Jeremy Corbyn one day. [He’s] hardcore. An old school leftist. This is what we need.”

Jason Leung a 16-year-old protestor, was marching with a poster carrying a rather different message. “Don’t walk and smoke at the same time,” it read.

“I think it is very selfish,” explained the teenager, who was at his first rally and said he had come because he wanted to experience first-hand Hong Kong’s vibrant democracy movement.

“I have no bad feelings [about China],” Leung said when asked to describe his politics. “But sometimes I hate to see the China flag on buildings. Hong Kong is not China.”

Xi Jinping was hundreds of kilometres away by the time Saturday’s protest began but he left demonstrators a clear message before his departure.

He said in an address before the protests began that Hong Kong must not be used as a launchpad to challenge Beijing’s authority and any questioning of China’s sovereignty in the territory “crosses a red line”.

His remarks were a clear warning to increasingly vocal political factions calling for greater autonomy from China or even outright independence.

“Any attempt to endanger China’s sovereignty and security, challenge the power of the central government and Hong Kong’s Basic Law, or use Hong Kong to carry out infiltration and sabotage activities against the mainland is an act that crosses a red line,” he said. “It is absolutely impermissible.”

Little more than an hour before Xi’s speech, democracy protesters were attacked by pro-China demonstrators and hauled away by police as they attempted to march on the daily flag-raising ceremony.

Avery Ng, the chairman of the League of Social Democrats, said activists had suffered “a whole new level of intimidation and direct violence” during Xi’s visit, designed to shield the Communist party leader from dissenting voices. “I urge the people of Hong Kong: do not give up … Once we give up then we will for certain slowly deteriorate into what is becoming of China today,” he said.