Over the past year, Belarus — one of Russia’s steadfast military allies — began slowly warming up to the West. But the political changes going on in the United States and Europe could give the nation, and other former Soviet states, cause to reconsider. (MAXIM MALINOVSKY/AFP/Getty Images)

After enduring three years of a foundering economy and feuds with the West, things may be looking up for Russia. The Brexit vote in June exposed the deep discord in the European Union, giving Moscow a glimmer of hope that dissenting member states might break the bloc’s consensus on its sanctions against Russia in a future vote on their renewal. Though EU members decided unanimously in July to extend the measures, upcoming elections on the Continent could undermine the bloc’s unity. In the United States, meanwhile, Donald Trump’s victory in the presidential election has opened a potential path to warmer relations between the United States and Russia, and perhaps even an end to Washington’s sanctions on Moscow. The turning political tides in Brussels and Washington could give the Kremlin the leeway to increase its influence in the former Soviet Union, leading the countries in Russia’s periphery to re-evaluate their foreign policy positions.

Many of Russia’s recent setbacks trace back to 2014. In February of that year, the Euromaidan protests in Ukraine culminated in an uprising that ousted President Viktor Yanukovich from office. The next month, Crimea declared its independence from Ukraine, and Moscow annexed the region and extended support to a separatist rebellion in Ukraine’s eastern part of the country. In response, the European Union and United States imposed sanctions on Russia. A few months later, global oil prices began a precipitous decline, and by year’s end had fallen nearly by half. The combination of lower oil prices and sanctions plunged Russia into recession and put it on a collision course with the West. At the same time, countries such as Ukraine, Moldova and Georgia worked to strengthen their ties to the European Union and NATO. In the span of a year, the Ukrainian conflict and the oil slump conspired to reverse the gains that Moscow had made over much of the past decade in re-establishing its influence in its former Soviet periphery.

Taking Another Look at the West

But now, Russia’s fortunes could change. Countries throughout the former Soviet Union have taken notice of the shifts occurring in Europe and the United States and are likely re-evaluating their positions with respect to the West as a result. In Moldova, the results of the Nov. 13 presidential election, which ushered the pro-Russia leader of the country’s Socialist Party into power, have already demonstrated the country’s ebbing interest in drawing closer to the West. Because Moldova’s parliament and prime minister still favor integration with the West, however, the president-elect, Igor Dodon, is unlikely to steer the country full sail toward an alliance with Moscow. Nevertheless, he will try to foster deeper economic and political ties with Russia. Georgia, too, has already begun to soften certain aspects of its stance on the breakaway territories of Abkhazia and South Ossetia, which were at the center of the country’s short-lived war with Russia in 2008. Furthermore, in the wake of its own parliamentary elections in October, Georgia is also likely to increase its economic ties with Moscow in the coming year. 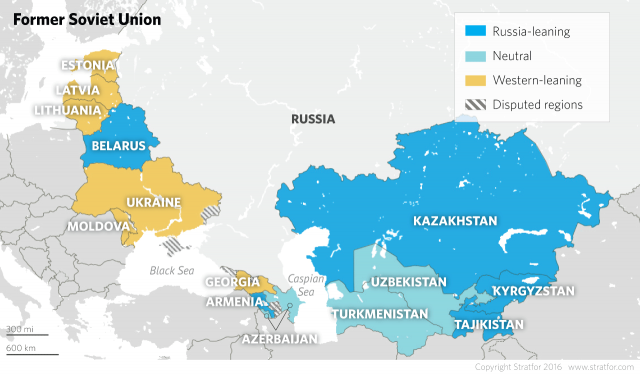 Though Ukraine has relied on economic and political support from the West — along with the assurance of sustained pressure on Moscow through sanctions — throughout its conflict with Russia, the government in Kiev cannot be certain that the backing will continue uninterrupted. Unlike Moldova, Ukraine is unlikely to elect a pro-Russia leader, given the enduring conflict in eastern Ukraine. But the changing political circumstances in Europe and the United States could force the Ukrainian government to temper its position on the Minsk protocols and take a more conciliatory approach to negotiations with Russia over eastern Ukraine. In the meantime, Kiev may try to redouble its military integration with Poland and the Baltic states in case NATO members, in particular the United States, scale back their security presence in Central and Eastern Europe.

Former Soviet countries that were already firmly aligned with Russia will also take stock of their ties to Moscow and the West in light of the political changes afoot. Despite its long-standing military alliance with Russia, Belarus began slowly but surely warming to the West over the past year — a process that could now be stalled or even reversed. By contrast, Armenia came to question its steadfast loyalty to Russia when fighting with Azerbaijan over the contested Nagorno-Karabakh region erupted anew in April. The feud escalated perhaps in part because Russia was too distracted at the time with the conflicts in Syria and Ukraine to intervene. If the West offers Moscow fewer challenges under new administrations in the United States and Europe, however, it will be in a better position to assert its authority as the dispute’s primary arbiter.

Even countries that have stayed more or less neutral in the standoff between Russia and the West may adjust their stance. Russia recently held talks aimed at strengthening military cooperation with Uzbekistan and Azerbaijan, former Soviet states that have increasingly looked to expand their relationship with Moscow in areas such as arms purchases and training. Moscow may also have a chance to reinvigorate integration initiatives such as the Eurasian Economic Union or the Collective Security Treaty Organization, since Europe’s growing political rifts are likely to interfere with the European Union’s focus on its Eastern Partnership program.

Over the next year, as a new administration takes over in Washington and the European Union’s splits widen, Russia may seize the opportunity to regain influence in many of its borderland states. But its comeback in the former Soviet states will fall far short of the one it experienced in the late 2000s, when Russia’s economy was thriving and its political system was free of the turmoil currently bedeviling it. Even if the West eases sanctions on Moscow in 2017, moreover, the United States and NATO are hardly likely to abandon their allies in Russia’s periphery. Still, the political transformations underway in Europe and the United States could give Moscow more room to restore its standing throughout Eurasia.