John Hemmings (john@pacforum.org) is Senior Director of the Indo-Pacific Foreign and Security Policy Program at the Pacific Forum.

The Biden administration released America’s new National Security Strategy (NSS) on Oct. 12. For those who read such documents regularly, there were few surprises. Values were mentioned in the context of the United States’ position in the world and vis-a-vis perceived adversaries, such as Russia, Iran, and the People’s Republic of China, while the administration’s lines of effort were laid out in a typical ends, ways, and means format. There were also sections on each region of the world, where the strategies laid out a bit more context.

If one compares the Biden NSS with three other NSS—1994 under President Bill Clinton, 2002 under President George W. Bush, 2017 under President Donald Trump—released early in the president’s term, one can see the evolution of US national strategy over time. By doing a word count of key terms in all four documents—such as “alliance,” “Asia,” “China,” “Russia,” “Europe,” “democracy,” “freedom,” “free trade,” and “terrorism”—it is possible to discern an administration’s priorities by how many mentions a key term gets in each document. Seen across time, it’s interesting to note the variation in use of these terms and indicative of differences and commonalities between different administrations.

For all the differences between the two parties in the US system and the yawning gulf of the culture wars, the four NSS analyzed are fairly similar. Not because they are mundane documents written by bureaucrats—they are usually led by the White House of each administration who work hard to put the president’s stamp on US security posture. Rather, they are similar because the two parties—despite their domestic differences—share a common worldview and a similar conception of the US role within that world.

The four strategies all stress the importance of values and the democratic system to its foreign policy. US policymakers continue to stress the role of US values in achieving its paramount position and making the world a better place, though different strategies vary in how the administration expresses those values. Democratic administrations seem to mention “democracy” more than “freedom,” while the reverse is true for Republican administrations. There are also differences in whether the US is determined to export or defend those values.

The major tension point for the Biden administration is knowing there is going to be a drawn-out ideological struggle with the PRC and Russia, while wanting to avoid the term “cold war” due to its long-term implications. Despite a clear rejection of the concept, the NSS nevertheless heavily from US values language from the 1950s by dividing values into two forms—freedoms of liberalism (voting, political freedoms, free media) and freedoms from coercion and oppression. This approach was prominent in President Truman’s 1947 speech to Congress and makes sense because it widens the US appeal to global partners. While the first form would be attractive to fellow democratic liberal states in Europe, the second is more attractive to small and medium-sized non-democratic states whose sovereignty may be threatened by Moscow or Beijing. If one is to fight a long ideological competition with a powerful authoritarian power, then one must frame that power by its coercive practices while having a broad base of support.

The 2022 NSS asserts that its goal is, at the systemic level, to create an order that is free, open, and prosperous—language echoing that found in the Indo-Pacific Strategy, and language developed with allies such as Japan over the past decade to frame Chinese actions in the South China Sea, its Belt and Road Initiative, and Russian efforts to destabilize and dominate Europe.

While previous strategies connect values with the overall international system, the Biden version follows that laid out in the Trump NSS by noting that China is also projecting its (authoritarian) values as it seeks to re-order the system.

Consequently, it lays out an architecture for out-competing the PRC across all domains, and this is the administration’s priority. Despite this, “Russia” still gains 71 mentions compared to “China” and “the PRC,” which had 54 between them. The most likely explanation is Russia’s renewed aggression against Ukraine, which dominates the section on Europe.

Speaking of Europe, one might expect to see the word “Europe” mentioned more than “Asia” or “Indo-Pacific” in earlier strategies but fade out as the PRC’s rise became a more pressing issue for US strategists, and this is borne out by analysis. Dropping from a high of 48 in the 1994 strategy, “Europe” is only mentioned 35 times in the 2022 NSS, while “Asia” and the “Indo-Pacific” are mentioned 43 times.

It notes that the lines between domestic and foreign policy are blurring in the age of social media, insecure supply chains, and data-related technologies. These, like 5G, artificial intelligence, quantum, and other emerging and critical technologies have grown in importance as Xi Jinping has accelerated the Digital China strategy. “Technology” was mentioned six times in 1994, nine times in 2002, 25 times in 2017, and 41 times in the 2022 NSS. This is a truly impressive marker of the importance of tech to the new era of competition.

The NSS also stresses the importance of allies, fairly common to most American strategic documents. However, the Biden administration’s strategy mentions “alliances” 17 times, only matched by the Bush administration’s, which was waging a global “war on terror” in 2002.

For those who track US trade policy, it will come as no surprise to see that “free trade” has also almost disappeared from the document, garnering only two mentions, a divergence between the United States and its allies. This reflects the United States’ continuing domestic debate over free trade agreements, sparked during the 2016 presidential election, which remains divisive among US policy elites.

Overall, the 2022 NSS is in line with those that came before it, but one can see the evolution towards a United States that must compete long-term with the PRC and Russia in the ideological, technological, military, and economic domains, and one that a United States that needs its allies to succeed. One can also see a glimpse of the values language used by former President Truman—which became the Truman Doctrine and laid the foundations for the generational competition with the Soviet Union. For those in the region who might view the United States as more obsessive about values—freedom and democracy—the document goes out of its way to create a non-liberal definition of freedom—one of freedom from coercion, a sort of support for sovereignty that underpinned US support for Turkey (a non-democracy in 1947). Surely, this is a definition that any regional state should support. If the United States can work with its partners and allies to make clear this is behind the term “free and open” with elements of open maritime access, the United States will begin to soften the resistance from regional friends and partners who do not share our democratic and liberal values. On the other hand, the lack of an economic framework is a key concern, given China’s pivotal role in the global economy and trade system—a very different challenge to that posed by a Cold War-era USSR.

A pragmatic strategy that lays the foundations for a decades-long competition but one that still needs to resolve key issues. 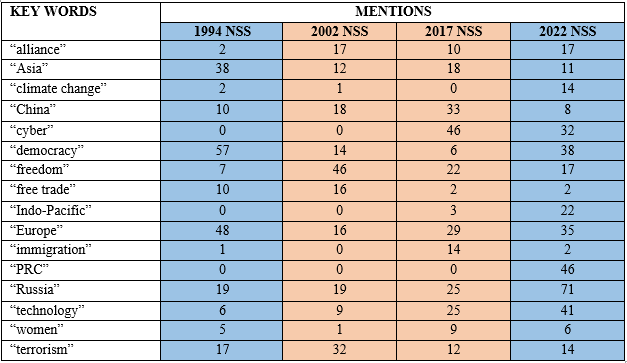 PacNet commentaries and responses represent the views of the respective authors. Alternative viewpoints are always welcomed and encouraged