Hong Kong (CNN)
For Adila Yarmuhammad, the release of a damning new report from the United Nations’ top human rights official on the treatment of Uyghur and other Muslim minorities in Xinjiang brought relief, and sadness.
The Australian-born 22-year-old, whose family comes from the region in the northwest of China, woke up Thursday to a flurry of WhatsApp messages about the report from other young Uyghurs worldwide.
“Everyone is relieved that something like a report came out … (but) the sense of relief doesn’t come with complete relief,” said Yarmuhammad, a leader in an Australian Uyghur youth group. 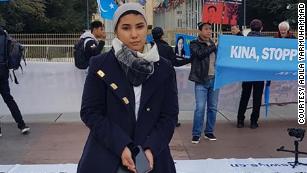 Adila Yarmuhammad attends a 2018 protest at the UN in Geneva.

For years, members of the Uyghur diaspora and rights groups have pushed for a strong response within the UN system to repeated allegations of major human rights abuses in Xinjiang. But member countries have not voted to establish a probe into the claims, which China has regularly pushed back against with firm denials.

The report from the UN Office of the High Commissioner for Human Rights was based on a years-long assessment of those allegations and made a strong statement: China has committed “serious human rights violations” against Uyghur and other predominately Muslim groups, which may amount to “crimes against humanity.”
“It’s a long-awaited recognition of the Uyghurs’ unimaginable suffering from the most authoritative voice on human rights in the world,” said human rights lawyer Rayhan Asat, whose brother, jailed Uyghur entrepreneur Ekpar Asat, has been held in Xinjiang since 2016.

“No government is above scrutiny and immune from accountability. Despite China’s efforts to destroy or defang it, this report from the UN body is an honest indictment of China’s crimes against humanity,” said Asat, who lives in the United States.

China has repeatedly denied accusations of human rights abuses in the region, and on Wednesday decried the UN report as “based on the disinformation and lies fabricated by anti-China forces.”

There are also stark questions about what impact the report will have on the ground within China and on Beijing, where Chinese leader Xi Jinping — under whom policies in Xinjiang were rolled out and who has strove to cement China’s role on the global stage — is expected to break tradition and step into a third term next month.

Many Uyghur and human rights groups have rallied around the report, calling for it to be a wake-up call to galvanize support for action within the UN — where the General Assembly and Human Rights Council both come into session in less than two weeks.

“Governments should waste no time establishing an independent investigation and taking all measures necessary to advance accountability and provide Uyghurs and others the justice they are entitled,” John Fisher, global advocacy deputy director at Human Rights Watch, said in a statement Thursday.

Washington also called for follow-up, with US Ambassador to the UN Linda Thomas-Greenfield saying it would be “critical that the full Human Rights Council membership have an opportunity to formally discuss the findings of this report as soon as possible and that the perpetrators of these atrocities are held accountable.” 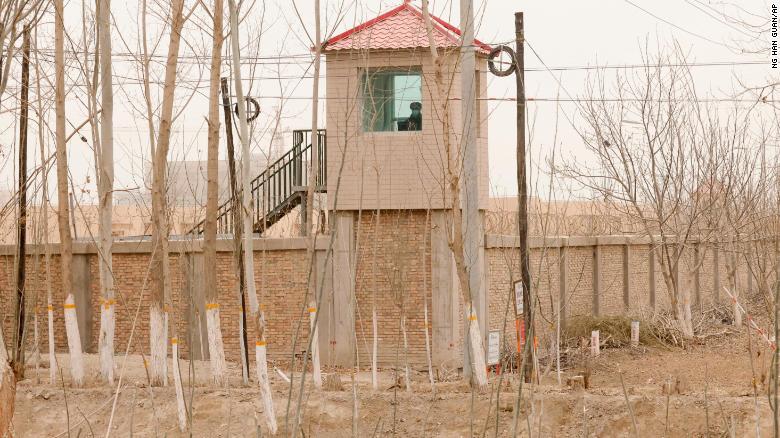 A security guard watches from a tower around a detention facility in Yarkent County in northwestern China’s Xinjiang region on March 21, 2021.

Before its publication, advocates had said they hoped a strong report could encourage more countries, like those in the Human Rights Council, to come forward in support of accountability for China, and spark a push for action from within other UN agencies.

But actions taken within the UN depend on the will of member states, such as those in the Human Rights Council, which must vote to establish mechanisms like formal human rights probes — and China holds significant sway.
The report itself is not on the current agenda for the Human Rights Council’s upcoming session, according to its website. It is also not slated on the UN Security Council agenda and would “probably not be discussed” in September, its president for the month Nicolas de Rivière of France said Thursday.

Even if states in the Human Rights Council were ultimately to vote for formal investigation on the heels of the report, it has no power to compel China to allow UN investigators to enter its borders. Complying with other recommendations in the report — such as the release of arbitrarily detained people and clarification of the whereabouts of missing individuals — would be at Beijing’s discretion.

And China has already made its stance on that clear.

“The suggestions the reports made are completely based on false information, made up out of political purpose, thus China rightfully rejects it,” Chinese Ministry of Foreign Affairs spokesperson Wang Wenbin said at a regular press briefing Thursday, when asked whether China would take action on recommendations made.
Impact in China

It is clear that China is concerned about the implications of the report.

Its diplomats have repeatedly voiced opposition to its release, and have already issued multiple statements condemning it, including a 131-page rebuttal to the High Commissioner.

“The so-called assessment is an illegal document and a perverse product of the US and some other Western forces’ coercive diplomacy,” a spokesperson of the Permanent Mission of China to the UN said Thursday.

But it remains to be seen if the report or ensuing international pressure will have an impact on the ground in Xinjiang, where academics and advocates allege the oppression goes on, though it is now being absorbed into the prison system and transformed into a forced labor apparatus and a culture of surveillance.

The UN report also pointed to indications of coercive labor, a shift toward formal incarcerations, and “invasive” surveillance in Xinjiang, and said it could not verify Chinese claims that its system of so-called “vocational education and training centers” there were closed.

Within China’s heavily censored domestic media environment, there has largely been silence, with state media not covering the report’s release for domestic audiences. 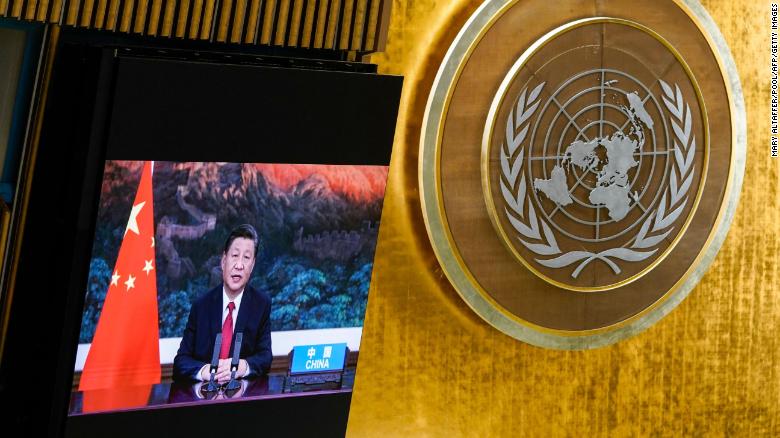 Chinese leader Xi Jinping gives a virtual address to the 76th Session of the UN General Assembly on September 21, 2021 in New York.

The report, “at the minimum” is embarrassing for China on the international stage, especially right before the Party Congress, according to Yun Sun, director of the China Program at the Washington-based think tank Stimson Center, referring to the upcoming political event where Xi is expected to assume his third term.

“China could deny the legality of all reports from Western countries and media on Xinjiang as biased. But now it is the UN, with all its credibility and legitimacy, saying the same thing. Beijing is backed to a corner on this, and there is very little it could say to refute,” she said.

The report creates a “negative blow” to China’s international image and could cast a shadow over Xi’s speech if he addresses the UN General Assembly this month, Sun said, but it will not necessarily affect the basic position of countries that have already chosen not to oppose China on this issue in the UN.

And it’s “concrete impact on the ground remains to be seen,” she added.

For the communities of those directly affected, who are thinking about loved ones in the region, those questions are stark, and immediate.

“At the end of the day, we are still relieved and we are satisfied that a report like this has come to light and it does shine a light on China and it helps us in our fight for human rights,” said Yarmuhammad in Australia. “But there’s always a sinking feeling that it’s not going to help.”