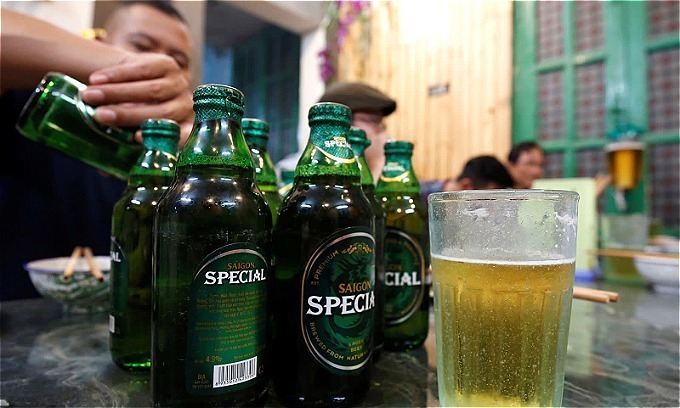 People enjoy beer at a Hanoi restaurant. Photo by ReutersTran Van Minh of HCMC says he has “a knack for drinking” and feels “uneasy” if he does not drink for two or three days.

The factory worker claims he is not an alcoholic though he goes out drinking several times a week and consumes around a dozen cans of beer each time or the equivalent in hard liquor.

“Like many others, I drink because it helps me forget my problems.”

Often he blacks out after getting too drunk and wakes up the next day without remembering what happened.

Minh is one of many Vietnamese men who claim they cannot survive without drinking alcohol.

Multiple studies have shown that alcohol consumption is dangerously high among Vietnamese men, including young adults, who are ignoring the negative effects on their health, family and society rather than quitting or limiting their liquor consumption.

A study done by the Ministry of Health and WHO in 2016 found that 77 percent of men drink liquor and beer, nearly half at hazardous levels.

According to the General Statistics Office (GSO), alcohol consumption in the country rose from 0.9 liters per person per month in 2018 to 1.3 liters in 2020.

The country had the world’s fifth-highest per capita alcohol consumption with 90.2 percent uptick in Vietnamese alcohol intake per capita between 2010 and 2017, according to a 2019 study by the British medical journal Lancet.

Many people do not wait to become adults to consume alcohol.

A survey published by Hanoi University of Public Health in 2018 found that 80 percent of males start drinking while still teenagers and adolescents. Some 44 percent of boys between eighth and 12th grades had their first alcoholic drink before age 14 and 22.5 percent felt tipsy at least once, the survey found.

Alcohol is an intrinsic part of Vietnamese culture and it plays a central role as a social lubricant in most people’s lives. As a result, drinking beer with the evening meal seems to have been a common feature among working-class people.

“It is a professional ritual and a big part of workplace bonding,” he explains.

“Post-work booze is like a treat for me and helps me sleep better.”

He insists that he is “not an alcoholic” despite the fact that he drinks three or four times a week. Because he is too inebriated to drive home, friends have to call his wife to come and pick him up.

“But once you sit at the table, you must drink as hard as you can or you will be perceived as not worthy of being a man,” he explains.

Dang The Vinh of the northern Thanh Hoa Province professes that drinking in the evening after work is an essential part of his life.

After knocking off several drinks, Vinh and his colleagues are relaxed, laugh and have a lot of fun.

He too claims he is not an excessive drinker and does not abuse alcohol nor seek alcohol to “feel happy and spirited.”

“I just enjoy drinking since it helps me and my buddies loosen up and bond better.”

He points out it is not uncommon for some people like him to unwind from a rough and stressful day by drinking alcohol.

It is widely believed that business deals in Vietnam tend to go more smoothly over a few drinks at the negotiating table, he adds.

“It is similar to people meeting up and chatting over a cup of coffee,” Vinh, who goes out drinking three or four times a week, explains.

Another reason behind the steady increase in alcohol dependence is that more men believe it helps forget their problems and is in fact a panacea.

Truong Quoc Ninh, a resident of HCMC’s Binh Chanh District, says he turned to alcohol to get over his recent divorce.

People in his neighborhood say he is an alcoholic as he survives on just an apple and a pack of instant noodles a day but drinks every day.

“I have to drink otherwise I experience withdrawal symptoms like trembling and vomiting if I suddenly stop.”

Ninh understands that if he keeps drinking excessively, it can damage his health but he cannot handle the intense and persistent cravings.

“It is already too late for me to make a fresh start now.”

According to the GSO, in 2019 the cost of treating six common types of cancers caused by alcohol abuse was around VND26 trillion (US$1.13 billion) while the cost of dealing with the consequences of alcohol-related traffic accidents was around VND50 trillion.

Vietnamese spend on average $3.4 billion on alcohol a year, or 3 percent of the government’s revenues, according to official data.

The spending on health averages $113 per person, according to the Ministry of Health.

An article published by the Ministry of Health in 2018 said some 800 people die as a result of alcohol-related violence every year.

Forty percent of traffic accidents in Vietnam are linked to excessive drinking, according to WHO, which says it is an alarming rate for a country where road crashes kill a person every hour on average.

A 2016 study titled ‘The Global Burden of Diseases’ by Lancet, which analyzed levels of alcohol use and its health effects in 195 countries and territories from 1990 to 2016, rejects the notion that any drinking can be healthy and concludes there is no amount of alcohol consumption that is safe for overall health.

WHO sent a letter to Vietnam in 2018 urging local governments to tighten control over the production, sale and advertising of beer and alcoholic beverages to discourage drinking and protect people’s health.

Kidong Park, the WHO representative in Vietnam, told VnExpress in 2019 that the reason why Vietnam is one of the biggest beer consumers in the world is that alcoholic beverages are very affordable in the country due to low taxes.

He pointed out that a cross-country study found that the tax on beer in Vietnam is only half the rate in Australia, New Zealand and Thailand.

Furthermore, alcohol is widely accessible in Vietnam, he said.

The government has some regulations on licensing and limits the alcohol sales and legal age for buying alcohol. However, these regulations are largely unenforced, leading to a worrying problem of high alcohol consumption among people aged 14-17, with the rate being 47.5 percent for both sexes.

To promote lower alcohol consumption, the government passed the Law on Preventing Alcohol’s Harmful Effects in January 2020, which doubled existing fines and revokes driving licenses for up to two years.

But whatever the hurdles, Vietnamese men do not appear to be deterred from their drinking habit.

Minh discovered two months ago that his liver was swollen due to excessive alcohol consumption. After more than a month of not drinking after work, he resumed saying he would drink less.

“I’ll keep an eye on myself by drinking in moderation.

“Drinking makes me happy and is an inseparable part of my social life. So there is no way I can stop it.”